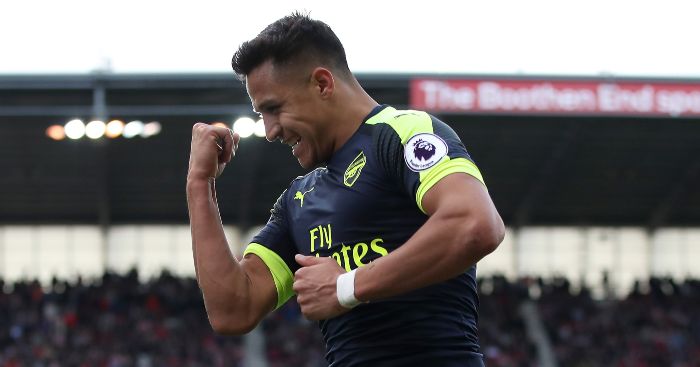 10) Man Utd (2020/21) – Bruno Fernandes
Add Saturday evening at the London Stadium to the growing body of evidence that Man Utd have developed a reliance on Bruno Fernandes. West Ham were excellent in the first half, unfortunate to lead only 1-0, when Ole Gunnar Solskjaer introduced his talisman. Fernandes proceeded to create eight chances in 45 transformative minutes, assist the equalising goal, break non-existent records and help snatch victory from the jaws of defeat.

Whether it is an unhealthy dependency or not is uncertain and hardly matters. Man Utd signed Fernandes as a panicked quick fix for their creative concerns – they had just been beaten 2-0 at Old Trafford by Burnley – and he has already emerged as a long-term solution to any leadership issues, attitude troubles or penalty-taking problems. His 36 goals or assists since making his debut is five more than any other Premier League player in that time. His five Man Utd Player of the Month awards of a possible nine since signing is preposterous.

When Bruno Fernandes was at Sporting it was the very definition of a one-man team. Never thought that would be the case at United!

9) Sunderland (2016/17) – Jermain Defoe
It is not necessarily a bad thing to base your entire team approach around a single player. Argentina became world champions in 1986 and Napoli ruled Italy twice a few years later by structuring themselves around Diego Maradona. But Jermain Defoe, while undoubtedly a talented and proven striker, is not quite one of the greatest to ever play the sport.

Sunderland were laughably focused on maximising his ability almost from the moment they signed Defoe in January 2015. He helped keep them up that season and in the following campaign under Sam Allardyce, who at least managed to coax performances out of some of his own winter arrivals. Yet David Moyes took it entirely too far in his year on Wearside, channelling his hopes through a 35-year-old Defoe to the point that his 15 goals were more than half of Sunderland’s overall league total, with Victor Anichebe and Patrick van Aanholt joint-second on three each. The former scored all of his goals over a fortnight in November. The latter left in January.

“I don’t think any price would buy Jermain – he’s priceless,” Moyes admitted in December 2016, ensuring no-one misunderstood his message. “Without Jermain we’d be really struggling,” added a manager who would finish bottom, 16 points adrift of safety.

8) Arsenal (2016/17) – Alexis Sanchez
So good was Alexis Sanchez during the 2016/17 season that he essentially stopped being a fully-functioning footballer thereafter. The Chilean has shown glimpses of his true self since but reached his peak in a final full season at Arsenal and will never scale such heights again.

It was perhaps never fully appreciated at the time just how brilliant he was. Sanchez led Arsenal for both goals and assists in the Premier League with 24 and ten respectively, adding Champions League strikes against PSG and Bayern Munich, as well as decisive efforts in the FA Cup quarter-final, semi-final and final. The forward was rewarded with stories leaking how he ‘sulked’ instead of celebrating a 3-3 draw with Bournemouth, while Arsene Wenger dropped him amid constant questions about his body language and future. The Frenchman probably retained his job for another year on the back of Sanchez’s ridiculousness alone.

7) Southampton (2002/03) – James Beattie
No player has ever scored a higher percentage of one team’s Premier League goals in a single season than James Beattie for Southampton. They rode the wave of his momentum to 8th and an FA Cup final with the striker scoring 23 of their 43 goals (53.5%) in 2002/03.

For Beattie, that meant all five of his England caps coming between February and November 2003, while he maintained his form long enough to secure a move to Everton and eventually an alleged headbutt from a towelled Tony Pulis. Quite the reward for trying to insert himself straight into the middle of Ruud van Nistelrooy and Thierry Henry’s simmering mid-2000s rivalry and almost succeeding.

6) West Ham (2010/11) – Scott Parker
Sir Alex Ferguson noted that Nemanja Vidic had been overlooked for the 2011 FWA Footballer of the Year award but still described Scott Parker as “probably the player who has driven [West Ham] on and motivated them to still have a chance of staying up”. Arsene Wenger called it “a justifiable choice” for “an outstanding season”. The midfielder was “just glad that I’ve been picked and people appreciate what I’ve been doing”.

He remains the only player to win that award while simultaneously suffering relegation. That is testament to Parker’s ultimately doomed but consummately professional leadership of a troubled West Ham side a decade ago. He couldn’t keep them up but it was thanks to him that Avram Grant’s outfit finished as close as seven points from safety. The Hammers lost seven and drew one of the eight league games he did not start that campaign, for an aggregate score of 3-20. Mark Noble took as many notes as he could but failed to replicate the dashing 1940s fighter pilot stylings of the true grand master, who jetted off to Tottenham that summer.

5) Crystal Palace (2004/05) – Andy Johnson
There is plenty of precedent for teams basing their plans for survival around the skills of one player. It almost paid off for Iain Dowie and Crystal Palace, who were about 15 years ahead of time in trying to get their best player 12 yards out in front of goal as often as humanly possible in 2005.

No relegated player has scored more goals in a Premier League season (21). No player has scored more penalties in a Premier League season (11). “People say we’re a one-man team, and Andy Johnson scored again,” said assistant manager Kit Symons after a stunning victory over Liverpool, “but this really was a fantastic all-round team performance.” The truth is that Palace would have stayed up if any teammate managed to reach even half the level of Johnson’s performances in his maiden top-flight campaign.

4) Arsenal (2011/12) – Robin van Persie
Sir Alex Ferguson was left with little choice but to appeal to the little boy inside Robin van Persie in 2012. The Dutchman had just completed one of the finest individual seasons in Premier League history to drag an incredibly ordinary Arsenal side to third, distant chasers of champions Manchester City and second-placed Man Utd, who missed out on the crown only on goal difference.

Poaching the Golden Boot winner from the team directly beneath them to address that issue was typical Ferguson. Van Persie had scored 30 of Arsenal’s 74 goals, their only player to reach double figures in the league, with Stoke at home the sole league game he didn’t start; the Dutchman came on at 1-1 with 24 minutes remaining and promptly scored twice in a 3-1 win. Van Persie even provided ten assists, while Alex Song only set up four (13.3%) of his goals because we have Mandela Effected those two combining every week into our tiny human minds.

3) Southampton (1993/94) – Matt Le Tissier
The ultimate one-club man for many – albeit only those lenient enough to overlook 18-post Southampton appearances for Eastleigh and Guernsey – made for quite the one-man team at his absolute peak. England’s lost talent had already been sustaining the south-coast side for a number of seasons but that reached ludicrous depths of dependence in the Premier League’s formative years as Le Tissier plundered 50 goals across three seasons of finishing 18th, 18th and 10th. Silly, really.

It was the second of those three campaigns that threatened to make a mockery of the situation, Le Tissier scoring three and a half times as many goals as his closest teammate: Neil Maddison managed seven to supplement the attacking midfielder’s 25. Southampton won 12 league games in 1993/94; Le Tissier scored in ten of them and assisted the winner in another. The only Saints victory that came without his direct and divine intervention was against Chelsea in December.

Plus there is literally a book written by a Southampton fan that was published earlier this year titled: ‘One-Man Team: The Matt Le Tissier Story’. Could have just put that.

2) Nottingham Forest (1992/93) – Roy Keane
‘Roy Keane shone like a beacon through all the gloom of that desolate season,’ Brian Clough once wrote of the ‘only’ player who ‘was doing his stuff regularly’ for Nottingham Forest in his final season as a manager. As the club slipped towards relegation barely a decade after ruling Europe, the young Irish midfielder was being linked with Milan, Sevilla, Real Madrid and England’s elite.

There was no mystery as to why. Keane was brilliant even then but the standard of that squad highlighted that further. He was often deployed in central defence until his midfield influence was deemed too great to sacrifice, while only Nigel Clough and Gary Bannister scored more goals for doomed Forest. Keane is still one of only two men to finish bottom and be named in the PFA Team of the Year, a player so dominant that he triggered a battle between the Premier League champions and their imminent challengers over what would eventually become a British transfer record signature.

Throwback to a young Roy Keane being linked with moves to Blackburn, Liverpool and Real Madrid 👏

1) Blackburn (1993/94 and 1995/96) – Alan Shearer
The man whose mark he surpassed was another at the centre of a Blackburn versus Man Utd tug of war. Alan Shearer sensed a shift in the balance of power and opted to join Kenny Dalglish’s revolution in the summer of 1992, staying for four years. That he is still their highest Premier League scorer of all-time with at least twice the amount of goals of any player tells its own story.

Two campaigns were particularly egregious with regards to Shearer’s Ewood Park omnipotence. He lifted the championship he so craved in 1994/95 but only as his partnership with Chris Sutton came into full blossom. In the seasons immediately before (Sutton’s last at Norwich) and after (one Sutton missed most of through injury), Shearer carried the attack single-handedly. He scored 31 in both. 24 and 25 goals more than Kevin Gallacher and Graham Fenton respectively: they remain the two biggest gaps between a top scorer and second at any club in a Premier League season.