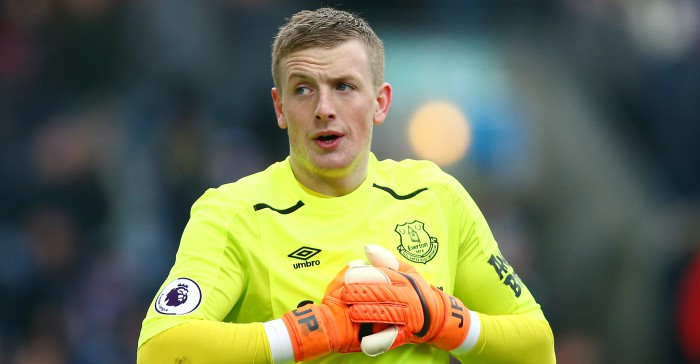 “I think at some point there needs to be an idea of who is No.1, whether it’s made public or not. I think it would potentially be important for someone to know,” said Jack Butland, emphasising that the first-choice England goalkeeper should be given “the right amount of time to prepare for what’s ahead”.

We have heard no such demands from potential England centre-halves or attacking midfielders; Michael Keane is not asking for ‘the right amount of time to prepare’ and Jesse Lingard is not saying he needs to have an idea whether he will be England’s No. 10. What makes goalkeepers so bloody special (apart from the gloves)?

Butland’s comments are likely born of fear, coming so soon after a costly error against Leicester and in a week when Burnley goalkeeper Nick Pope has been tipped for an unlikely call in this month’s friendlies. He wants to know so he can relax, but if he cannot handle the pressure of playing for his England place over the next ten Premier League games, should he really be England’s goalkeeper in the World Cup anyway?

Nobody wants to see a repeat of the 2010 World Cup, when Fabio Capello refused to name his No. 1 and it created a climate of fear and uncertainty in South Africa, with Robert Green being replaced by David James mid-tournament after a monumental error against the United States. Gareth Southgate is presumably not proposing such anarchy, but merely the chance to pick his most in-form goalkeepers for squad and then starting XI.

Southgate was in Burnley on Saturday lunchtime to see the increasingly rare sight of a Premier League game with 13 Englishmen in the starting line-ups. He may well have made notes on the dangerous counter-attacking pace of a revitalised Theo Walcott, and wondered whether Ashley Barnes could be a wild card, but it was Pickford who stood out among the kind of mediocrity that only a 7th v 9th clash can provide. If Butland wants to push Southgate into a decision after that performance, he might want to stick his fingers in his ears.

Pushing away Barnes’ header in the first half was phenomenal, but almost as impressive was a pair of saves within two minutes at the start of the second half as Everton made a concerted effort to utterly fall apart. Once again, when all around him was dissolving like paper in the rain, Pickford was steadfast and strong. Everton’s player of the season was again fast becoming their man of the match. It was almost the perfect day.

Jordan Pickford having another fantastic game so far today, commanding in his area & making smart saves. It's a far cry from Tim Howard's star-jumps #EFC

Jamie Carragher was keen to lay some blame at Pickford’s door for Burnley’s equaliser, but Pickford’s position would be replicated by the majority of Premier League goalkeepers this weekend. He would not have expected one long ball down the inside channel to take out his entire defence. Or perhaps he should, considering the number of times he has been exposed this season by the hapless and paceless Michael Keane and Ashley Williams. As they dropped deeper, Pickford had no choice but to drop deeper again…as tempting as it might be to help out and form a three-man defence.

It is certainly not entirely Pickford’s fault that – at full-time – no Premier League goalkeeper had conceded as many goals; after all, nobody has faced more shots. He was not to blame for Burnley’s second just as he has not been to blame for the majority of the 49 goals he has conceded. While Burnley’s centre-halves work to protect their goalkeeper, Everton’s appear to be working against him, leaving him exposed with shoddy marking and half-hearted clearances. Even Seamus Coleman joined the conspiracy by allowing Barnes to block him in at that second corner that sealed the Toffees’ fate.

The performance was almost perfect but the numbers once again look disastrous. Right now, the biggest threat to Pickford’s England chances is not the panicking Butland but the pathetic Everton defence.