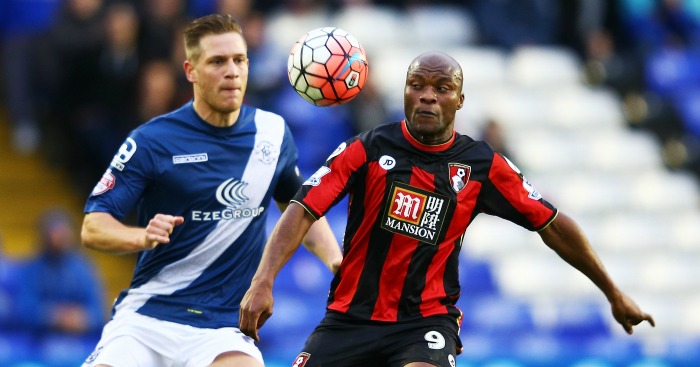 The substitute smashed home with five minutes left to seal a 2-1 win and send the Cherries into the FA Cup fourth round.

Their last visit to St Andrew’s ended in an 8-0 victory on the way to promotion to the Barclays Premier League, but there was never any hint of a repeat scoreline.

Lee Tomlin’s penalty cancelled out Michael Morrison’s opener for the hosts and the visitors rode their luck in the second half.

James Vaughan missed a spot-kick for Birmingham and Jacques Maghoma hit a post before Murray had the final say.

The Cherries made 11 changes and handed defender Jordan Lee his debut, while they also named Jordan Green on the bench, who was stacking supermarket shelves and playing for Banbury last summer.

Birmingham themselves made seven changes and started brightly as Andrew Shinnie skied over from six yards inside the first minute from Viv Solomon-Otabor’s cross.

Shinnie was the hosts’ greatest early influence, but the visitors began to exert some control despite playing their second string.

First Shaun MacDonald’s six-yard header struck the top of the bar on 20 minutes before Adam Legzdins saved his follow up.

The midfielder then curled wide after a neat flick from Tomlin and Legzdins turned Marc Pugh’s 25-yard drive wide.

Birmingham’s threat had waned with Solomon-Otabor well shackled and Vaughan, back for the season on loan from Huddersfield, anonymous.

There was little sign of the opener, but the hosts took the lead five minutes before the break when Morrison headed in David Cotterill’s precise free-kick.

It riled Bournemouth and they were level four minutes later from Tomlin’s penalty, which left Blues furious.

Eunan O’Kane went down under Jonathan Grounds’ challenge and referee Michael Jones gave the spot-kick – despite heated protests – which Tomlin lashed down the centre for his first goal for the club.

But Birmingham had their own chance from the spot after a quiet opening to the second half when Solomon-Otabor found Maikel Kieftenbeld and he was brought down by O’Kane on 59 minutes.

Birmingham-born Vaughan, who failed to score in six outings during his initial loan stay, took it, but blazed well over.

Before then MacDonald had driven over for Bournemouth, but the much-changed Cherries lacked tempo and fluency against their gritty hosts.

Birmingham grew in confidence, despite their penalty miss, and wasted a brilliant opening with 15 minutes left.

Baily Cargill was robbed in the area by Maghoma, who cut inside but could only curl a shot against a post with Adam Federici out of position.

The ricochet hit Shinnie and bounced off a post again but the midfielder had already been flagged offside.

It was another massive let-off for the Cherries and they cashed in with five minutes left.

Steve Cook was given too much time on the right to swing in a cross and Legzdins managed to save O’Kane’s header and Pugh’s follow-up, only for Murray to win it from point-blank range.

The goalkeeper seemed to claim he had two hands on the ball, but he was almost beaten again three minutes later when Matt Ritchie’s header bounced off a post as the Cherries edged through.