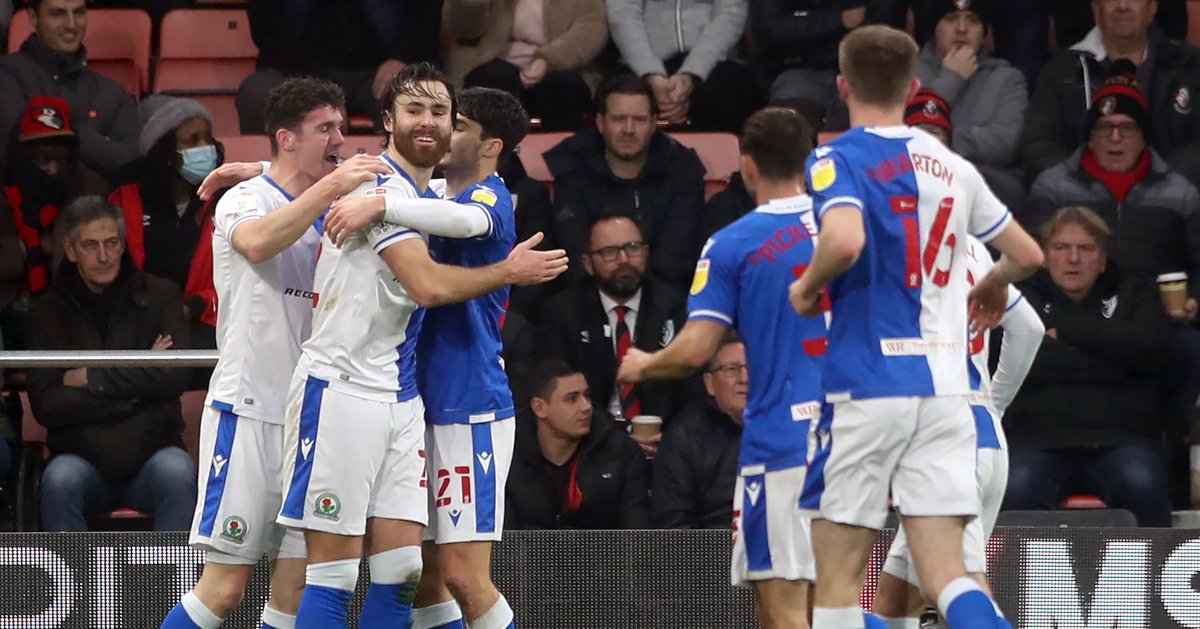 Blackburn are making a case for an automatic promotion push from the Championship.

Blackburn
A monumental win over promotion favourites Bournemouth did not move Blackburn any higher up the league table, but it provided a huge step forward in a purple patch which is fast becoming a serious push for promotion. With the top two off the pace since the start of November, Blackburn have recovered from a 7-0 thumping to record a fourth successive victory without conceding.

Whatever misgivings some Rovers fans had and have over manager Tony Mowbray cannot be at the forefront of collective minds while this team continues to thrive around the talisman that is Ben Brereton Diaz – without a goal this weekend but very much the reason behind Ben Pearson’s own goal.

Bournemouth edged much of the game, but Blackburn – as they so often do – got it right when and where it mattered. Continue to make a habit of it and fourth place will cease being their ceiling. All three above them should look over their shoulders with great caution.

Taylor Gardman-Hickman
But West Brom, who have been sitting less than pretty in third place for the majority of this Championship campaign, will be less worried than their more esteemed promotion candidates after a 1-0 victory over struggling Reading made it back-to-back victories for the Baggies.

Valerien Ismael’s side have flattered to deceive for large portions of 2021/22, but up against the tide of having almost their entire defence obliterated by positive Covid tests and having to fill the bench with academy players, it was one of their more established youngsters who was the crowning glory in this win over the Royals.

As excellent as he is versatile, midfielder Gardman-Hickman is an unfamiliar name to many outside of the Midlands, but it shouldn’t remain that way for much longer. A third man of the match performance in as many games in as many positions means West Brom have found the secret weapon they needed in January has been at the club the whole time. For as long as he is a mainstay, West Brom will consider their promotion hopes boosted.

Steve Cooper
Before Steve Cooper took his new Nottingham Forest side to his old Swansea City charges, we pondered the issue of how his summer Swans exit and subsequent arrival by the Trent had worked out well for everyone involved.

But on Saturday afternoon, it was Cooper who was left the most delighted as his Forest side thrashed Swansea. Forest’s first half of the season can very neatly be divided into three clean portions: the losing streak under Chris Hughton, the mass accumulation of wins when Cooper first arrived at the City Ground and then the pattern of draws which have followed.

But against his old club, Forest produced one of their best performances in years, and sit in the highest position since their failed play-off bid under Sabri Lamouchi, when Swansea famously pipped Forest to the final play-off place. One defeat in 15 games shows just how far Forest have come and while Swansea have begun to toil, Forest are having more than a taste of what the Welsh side had for two years – results, glorious results – and sit two places and four points off the play-offs. Don’t yet rule out a third successive play-off campaign for Cooper.

Ryan Lowe
In reality, beating this Barnsley side at home was a task that Lowe’s predecessor Frankie McAvoy would likely have achieved, but you can ask for no better start to a new managerial era than three points. Lowe swapped Plymouth for Preston having overseen three successive defeats with the Pilgrims and a promotion charge dented.

At Preston, there is little danger of either relegation or promotion, but a good opportunity to assess the squad in a transition season which now has a sense of meaning. The Deepdale side started the day slightly closer to the relegation spots and ended it the other side of equidistance away from the top six. Bringing his favoured 3-4-1-2 formation straight into the club clearly worked a treat as Daniel Johnson – playing in that hole behind the paired strikers – scored the winner.

Luke Plange
Casual observers of the Championship will not be familiar with a good handful of Derby’s forcefully youthful side, but Luke Plange’s name is a new one on many second-tier experts too. On his first start for the Rams, the teenage striker showed the execution and composure his more senior counterparts have all too often failed to show while Wayne Rooney’s side have struggled in front of goal this term.

The three points his second-half strike secured will ultimately matter not in the fight for safety, but offer another glimpse of light at the end of this particularly bleak tunnel. For all the dark times, Saturday’s towering of Blackpool was another great day on the pitch for this team that refuses to lie down. Plange is another fighter to add to that roster.

Jonson Clarke-Harris
Only one goal was given to Peterborough striker Clarke-Harris, but the credit for this victory over Millwall all goes to the striker who has largely struggled in front of goal for the Posh this season. Having turned around a first-half deficit to move within two points of safety, Darren Ferguson’s side will be hoping it is also the turning point in their season. While Barnsley and Derby’s gap to the dotted line is a mirage in the desert, Peterborough are within touching distance of the glorious lake that is second-tier safety.

Carlos Corberan
Huddersfield’s season is not so much falling apart as it is transcending into a barrage of disappointments and what ifs. At no time of Carlos Corberan’s reign has that rung truer than in injury time of their clash with Coventry City as three points turned to one and felt like defeat.

The Spanish head coach lamented his side’s inability to attack in the second half, but as he has done so often, shot his own team in the foot with an overly defensive strategy when just a goal up. It nearly didn’t matter, but as they so often do, Coventry netted a dramatic late goal and Huddersfield had only themselves to blame.

Having looked like potential promotion candidates for much of the first half of this season, the halfway mark looks set to see the Terriers very much entrenched in mid-table following a run of one win from their last seven outings. Upcoming fixtures against struggling Bristol City and Blackpool could be make or break for Corberan and Co in West Yorkshire.

Swansea City
For all the good that Russell Martin has achieved in his short time at Swansea City so far, much of it intangible to date, the Swans’ 4-1 dismantling at the hands of Nottingham Forest made for a third successive defeat. That worst run of the season trumps anything from the extremely slow start made when the team was getting to grips with Martin’s style of play.

This is a transitional season after the loss of so many key personnel from the last two seasons of success under Steve Cooper, and the Swans sit eight points off both the bottom three and the play-off places.

Bournemouth and Fulham
We had convinced ourselves that there would be no twists this time around. For so much of the season, Bournemouth and Fulham looked set to run away with automatic promotion. Difficult runs of form for either were compounded further this weekend with defeat to Blackburn and a draw to Luton respectively.

A second wind is desperately needed on the south coast and in west London.

Blackpool
They shouldn’t worry too much just yet, but a winless November has bled into a pointless December thus far. A trip to rock-bottom Derby offered the perfect chance of respite to get back on track, but the Tangerines looked toothless at Pride Park. That’s now four games without finding the back of the net and just as Huddersfield will target their clash with Blackpool a winnable fixture, Neil Critchley knows scoring and winning is much needed in games like that.

Barnsley
Two goals, two points and no wins from Payo Asbaghi’s first four games in charge of Barnsley have done little to qualm fears of relegation 12 months after being three games from the Premier League. That the same problems exiss under their Swedish-Iranian manager as they did under predecessor Markus Schopp suggests there are much bigger problems at Oakwell than the man on the touchline, but that does little to help allay fears that there is nothing the Tykes can do to stave off relegation.

Now six points worse off than the next worst team in the Championship this season, Barnsley are looking more and more doomed with every passing defeat. With their remaining December fixtures all against teams in the top half, the South Yorkshire side could have one foot in the third tier come 2022.