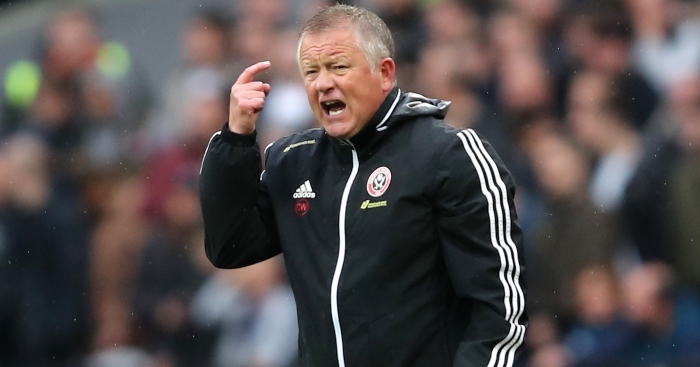 Chris Wilder encouraged Sheffield United fans to leave their grudges at home and ‘have a beer’ with their West Ham hosts on Saturday and such is the esteem he is held in by the supporters, the travelling Blades would probably have offered to buy the first round. Even for those gloating Hammers clad in Carlos Tevez masks at the London Stadium.

It is not just United faithful to whom Wilder’s word is sacred. His players are also hanging on every instruction, each compliment and, crucially, the occasional criticism.

“I don’t feel there’s anything wrong with the truth and an honest approach,” said Wilder before his players ran further and harder than Arsenal on Monday. It certainly seems to be doing the trick. The Blades, a squad brimming with Championship experience but little above the second tier, have been inspired by Wilder to raise their game to the levels required in the Premier League.

Ten games in, United sit in seventh place, a long way from the bottom three where many assumed they would spend much of their first campaign back in the top flight for 12 years. The 1-1 draw at West Ham means the Blades, along with Premier League leaders Liverpool, remain one of only two sides unbeaten on the road this season.

📊 Sheff Utd:
🔴Remain 1️⃣ of 2️⃣ teams still unbeaten away in PL this season (Liverpool the other) W1 D4 L0
🔴Equal their longest unbeaten away run in PL – 5️⃣ games (last done in 1994)
🔴1st newly-promoted team to go unbeaten in 1st 5️⃣ away PL games of season since Hull in 08-09 pic.twitter.com/DB2in8HWS1

Wilder may come away from the London Stadium with a tinge of regret. United were arguably the better team against a West Ham side struggling for cohesion and, consequently, points. Wilder’s men matched Manuel Pellegrini’s side for shots on target and shots inside the box despite allowing the hosts more than 60 per cent possession. Though they trailed at half-time, they could have been ahead on the balance of the first-half chances.

And you can bet Wilder told his players so at the break. “The manager says it how it is,” said George Baldock while explaining why he and his team-mates ‘will run through a brick wall’ for their manager. “He’s an honest guy, he speaks the truth and he never lies to you. It’s the best way because you know where you stand. It is refreshing to see.”

Indeed it is. Wilder’s words have raised eyebrows already this season for the forthright honesty in his appraisal of players when he feels they have not done him or themselves justice. Many presumed Dean Henderson would be offered some encouragement after the keeper ruined all United’s good work against Liverpool by letting Gini Wijnaldum’s shot slip through his grasp. Not so.

“I’m certainly not going to put my arm around him and rub his head,” said Wilder of the England Under-21 keeper. “We set a high bar. It always amazes me when pundits talk about not criticising players in the press. This game has been beamed around the world. There’s no hiding place.”

Not at Sheffield United, though many players elsewhere would be ducking for cover in the face of Wilder’s tough love. But that approach has helped create the mentality that, along with the players’ willingness to take responsibility for their own performances, has been an enormous factor in United’s success so far.

Contrast his approach with that of Ralph Hasenhuttl on Friday night. The Southampton boss watched his players down tools on home soil and allow Leicester to inflict upon them their biggest ever defeat in the top flight. Jamie Carragher called the Saints’ surrender “absolutely disgraceful” but even that assessment does not go far enough.

That is typical of the majority of managers in the modern game who are petrified of calling their players out in public. Hasenhuttl’s let-downs had just conceded nine goals at home. It was not the manager who refused to run or failed to fight. But those most culpable were shielded from the flak.

As Wilder recognises, protecting players from deserved criticism does them no good. It only breeds a weak mentality. Sheffield United will lose more matches this season, but never will they lay down like Hasenhuttl’s pea-hearted mob on Friday. Honesty really is the best policy.