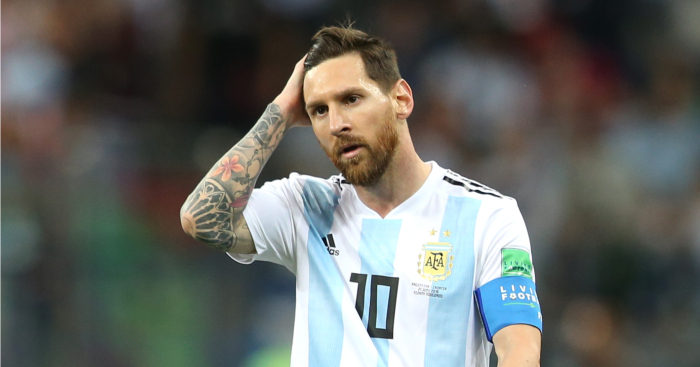 Yet only a fool would argue that both sides are equally reliant on this magnificent, unique talent. There is a difference between being able to carry a team to success, tying central midfielders around your waist and stuffing full-backs in your pockets, and having to. The weight of obligation suffocates freedom of expression, strangling even the most joyous footballing bon viveur.

Watching Messi play for Argentina, regularly wiping his brow as another opportunity passes by, is simultaneously an engaging and an uncomfortable experience, like witnessing a tightrope walker make his way across the vast gap between two skyscrapers. Success brings wild applause and adoration; failure brings gasps and notoriety. There is no middle ground when you are stranded 500 ft above the concrete. Like the tightrope walker, every step becomes a clutch moment. Like the tightrope walker, every wobbles makes the subsequent step harder to get right. And so you get to a mediocre penalty against Iceland, and a man looking haunted even as the national anthem plays.

This is a mess of an Argentina team. Angel di Maria was missing in inaction in Argentina’s first match and deservedly lost his place, but Maximiliano Meza hardly grasped the opportunity against Croatia. Sergio Aguero scored against Iceland but was a wraith of his Manchester City self on Thursday. In central midfield, Javier Mascherano’s club career has burnt down to the wick but still starts and neither Lucas Biglia nor Enzo Perez would start in half a dozen other teams at this tournament. Perez’s first-half near-open-goal miss was particularly dismal.

Sampaoli rearranged the central defensive deckchairs on the Titanic for Croatia, but each one creaks when you sit down, and that’s even before the goalkeeping iceberg comes into view. Willy Caballero is 36 and has not been first-choice at club level since Malaga finished 11th in La Liga in 2013/14. His mistake for Croatia’s goal was so bad that Steve Wilson on the BBC screamed his name and not Ante Rebic’s.

Against Iceland, there was a good game to play: Count the number of times Messi was given the ball with three or four players around him. His magnetism to opposition players should create space for others, but either his teammates were taking the easy way out, or Jorge Sampaoli was. Or both.

Against Croatia on Thursday, Sampaoli and Argentina lurched from one extreme to the other. Sampaoli’s altered formation starved Messi of the ball and kept him largely out of danger when he did receive it. He and Sergio Aguero touched the ball 27 times between them in the first half. Sampaoli, a noted tactician, has still found no solution to a problem that has been months, years even, in the making. Poor Leo.

Whenever anyone says anything about Messi needing a World Cup to cement his legacy, I'm just sending them this lineup graphic. pic.twitter.com/gFEgACRXwY

Football is not a pursuit in which perfection is possible, or even visible on the horizon. Mohamed Salah, who enjoyed the season of his life at Liverpool in 2017/18, scored with fewer than one of every four shots he took. Seventy-eight percent of the time, he failed in his task. He was rightly lauded.

Greatness, certainly for attackers, is therefore established via two routes. A player must either use his skill to create enough opportunities that the percentages still produce phenomenally high numbers of goals or chances created, or they must establish a reputation for producing in the clutch moments.

Because we are contractually bound to mention Cristiano Ronaldo in every article about Lionel Messi, think back to that free-kick against Spain. Ronaldo’s general free-kick record is appalling, both for Real Madrid and Portugal. But when the situation demanded supreme skill as necessity, Ronaldo produced. It was reminiscent of a Nike advert, one man against a goalkeeper, a team, a country. Shorts rolled up, deep breath, deliberate steps, magnificence. Just Did It.

Lionel Messi has contributed to goals in both extraordinary volume and of extraordinary importance for Argentina. He dragged them through the last World Cup, and only a hat-trick from Messi saved this dream in the thin air of Quito, Argentina 1-0 down after 38 seconds and sixth in their CONMEBOL qualifying group. He has carried this team for so long that he could file an injury-at-work compensation claim for a bad back. But still his country demands more.

The deeply unfair paradox here is that the more a player is asked to contribute, the more ripe they are for criticism if they fail in this thankless pursuit. Messi has received more flak during the first two games than his ten teammates combined have earned for hiding in his shadow to avoid the spotlight’s glare. Do something and he is briefly feted. But fail do to do everything and he is lambasted in some quarters. When Luka Modric’s goal hit the net, who did the camera pan to? Oh yes.

Messi deserves better than this. His brilliance has bred complacency in those around and above him. Sampaoli insisted that his team would not solely rely on one player, but if anyone was naive enough to believe that trope before the tournament, they surely do no longer. Turning his teammates into a team might just be Messi’s Sisyphean task. He does not deserve censure, only sympathy.