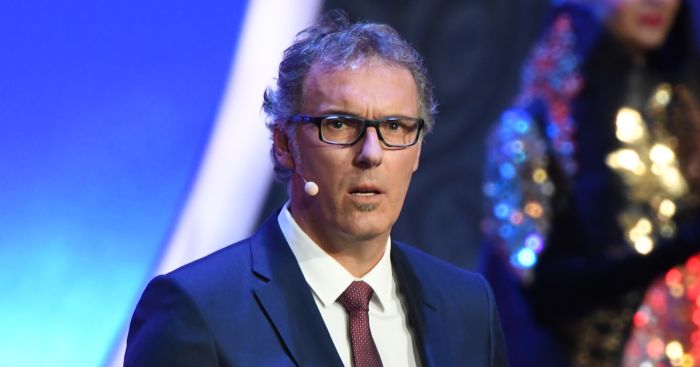 Laurent Blanc is now Chelsea’s top managerial target after the club were put off by Maurizio Sarri’s controversial past, according to reports.

Blanc won the 1998 World Cup as a player and is best known in England for his couple of seasons at Manchester United at the end of his distinguished career.

The Frenchman has won four Ligue 1 titles as manager, three with PSG and one with Bordeaux, while he also lifted two French Cups and four French League Cups over his time at both clubs.

The Sun claims the two-time Ligue 1 Manager of the Year has jumped to the head of the queue as Chelsea look to replace Antonio Conte as manager.

Chelsea have discovered that Sarri, who had been the favourite to get the job, had a homophobic row with Roberto Mancini during a Coppa Italia match last campaign.

At the time, a furious Mancini said: “The confrontation on the touchline? You have to ask Sarri about that.

“He is a racist. People like him do not belong in football. He used racist words.

“I stood up to ask about the five minutes being added on and Sarri shouted ‘poof’ and ‘faggot’ at me.

“I would be proud to be that if he is what’s considered a man.”

Sarri, who left Napoli last week, was fined €20,000 and banned for two Coppa Italia matches at the time.

“I was just irritable … I was not discriminating against anyone,” Sarri said following the incident. “If I did indeed use those words, then I apologise to the gay community.”

Like all clubs should, Chelsea have tried stamping down hard on racism, sexism and homophobia with a zero tolerance attitude.

That means Sarri has been put to the back of their thoughts and they will push ahead to secure another candidate, with Blanc pushed to the top of their list.

Blanc, who scored the first-ever golden goal in World Cup history against Paraguay, would be ready to take over from Conte as soon as the club announce his departure.