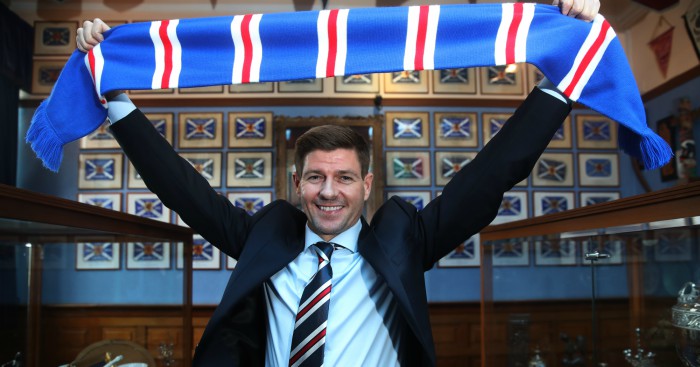 Rangers boss Steven Gerrard insists he is in it for the long haul at Ibrox after hailing the backing he has received from chairman Dave King.

The former Liverpool skipper was appointed on a four-year deal in the summer and has made an impressive start in his rookie year as manager.

His side can climb to the top of the Ladbrokes Premiership on Sunday with victory over Hearts, while they remain in the hunt for the last 32 of the Europe League ahead of Thursday night’s showdown with Villarreal.

Gerrard insists all that would not be possible without the support of King, director of football Mark Allen, managing director Stewart Robertson and the rest of the Light Blues board.

And he says he is looking forward to a long partnership together.

Gerrard, speaking at the Rangers International Football Club’s annual general meeting at the Clyde Auditorium in Glasgow, said: “I’d like to thank Dave for the support he’s given me since day one and also the rest of the board.

“They’ve been really supportive to me and my staff and I’d like to thank Mark and Stewart, who I work with on a daily basis.

“Without the support behind myself and my coaching staff, we wouldn’t have been able to have achieved what we have so far.

“I can assure everyone that we’ll give every bit of time and effort we’ve got to continue moving the club forward on the pitch and we’ll continue trying to attract the best players possible to help bring success back to this incredible club.

“I feel I’m in such a blessed position to be here as manager. I hope I stay here for a very long time and we share some really good times together.”

However, Gerrard was forced to defend the club’s handling of former skipper Lee Wallace after an angry shareholder hit out at the left-back’s “disgusting” treatment.

Wallace was stripped of the captaincy following a bust-up with interim boss Graeme Murty in the aftermath of Rangers’ 4-0 Scottish Cup semi-final hammering by Celtic last season.

Wallace – who stuck by the club following liquidation – has made just one substitute appearance this term as he continues to struggle with injury.

But Gerrard said: “I have to pay my respects to Lee in terms of his professionalism while he’s been trying to get fit.

“To be really candid, he’s still part of the plans while he’s here but I have better options in that position.

“My relationship with Lee is fine. He trains with us every day and is pushing hard to regain his place in the team.”

The under-20s boss – who also took over the first team after Mark Warburton was axed – led the club until he was removed from his post on the back of two crushing defeats to Celtic late last term.

He has since returned to coaching the youngsters after Gerrard was drafted in to pick up the pieces following last year’s disastrous campaign.

“I want to thank a man who to my mind is a true Rangers hero,” said King.

“For the second time – and at great personal anguish much of the time – Graeme Murty put the club ahead of himself by taking on the extremely difficult role of interim manager for a prolonged period and under challenging circumstances.

“Graeme, I am extremely grateful for your sacrifice and for your decision to continue to help the youngsters at the academy despite your disappointment. You are my man of the year.”