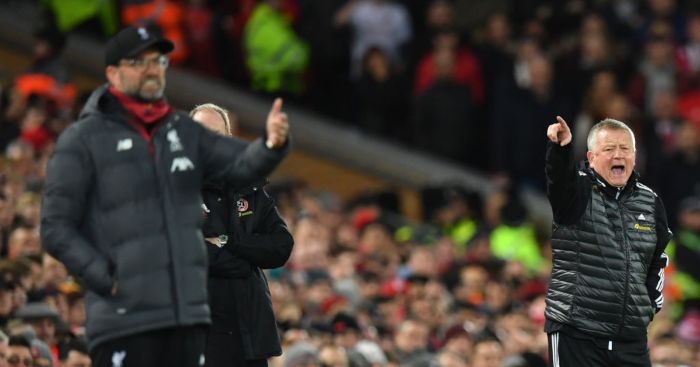 Sheffield United boss Chris Wilder has hit out at the “selfish” managers of the Premier League’s top teams over their insistence that the five substitution rule should be reintroduced.

Top-flight clubs in England have twice voted against increasing the number of substitutions allowed per team each game from three to five in response to the growing number of injuries during a busy fixture schedule.

The change came into force at the end of the last Premier League season but was not retained due to the fear it weighed too heavily in favour of bigger clubs and their stronger squads.

Manchester City manager Pep Guardiola has spoken in favour of continuing with five substitutes since the summer, and interestingly West Ham boss David Moyes, who was initially against it, says he is now a convert.

Liverpool and Jurgen Klopp have been particularly badly hit by injuries during a hectic schedule with the Reds boss in favour of bringing the five sub rule back.

However, Wilder doesn’t think it is needed and that managers of big clubs are just looking out for themselves.

“Cards on the table, he’s going to look after his own club,” Wilder said of Klopp (via Goal).

“I’ve got incredible respect for these top managers because they produce top results and win things.

“They’re going to be bothered about Liverpool, Man City and Chelsea, which I understand and respect. I would be the same, but I’m bothered about Sheffield United and it doesn’t help us to have five subs.

“I don’t think the common man is going to be too sympathetic to the mental aspect of players on £250,000 a week not getting into an 18-man squad. That’s b*llocks as far as I’m concerned.

“If that helps us, we’ll gladly take it because this is the competitive aspect of football.

“They’re not because they only look after their own club and I’m just looking after my own club.”