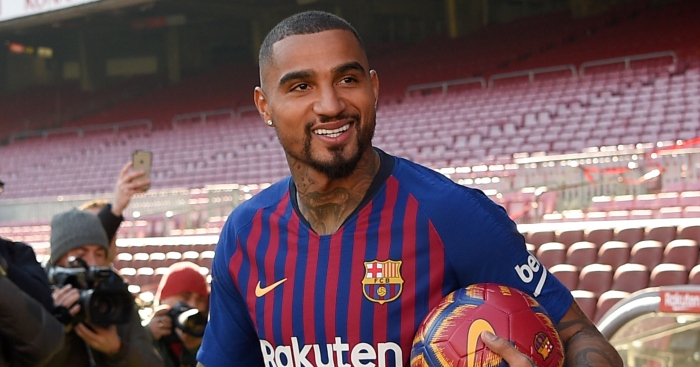 I’ve witnessed some strange transfers in my lifetime, but this one is right up there with Julien Faubert to Real Madrid in terms of oddness. It’s taken everyone by surprise, including the player himself, who could barely believe his luck. Kevin-Prince Boateng – just six weeks short of his 32nd birthday – is now a Barcelona player.

A well-travelled, versatile attacking midfielder whose career has been interspersed with occasional flashes of brilliance in the midst of more general mediocrity, Boateng will provide back-up to Barcelona’s attacking trident of Lionel Messi, Luis Suárez and Ousmane Dembélé following the sale of Munir El Haddadi to Sevilla.

So this is why Barcelona signed Kevin-Prince Boateng…pic.twitter.com/rkZKyYJxlr

It may seem pretty mental, but there is logic behind the decision. Munir’s departure left a gap to be filled, and it had to be someone who could slot into the team if needed, but was content to warm the bench the rest of the time. At his presentation, Boateng made it clear that he knew that his role was essentially that of understudy, but seemed genuinely thrilled by the prospect.

The Ghanaian joins on loan from Sassuolo until the end of the season for a loan fee of €1m, with an option to buy for €8m in the summer. It’s a low-risk move for Barcelona, and one that they are able to make from a position of strength. They are five points clear at the top of the league, and don’t need to make any urgent adjustments to their squad. Any major squad surgery that is required can wait until the summer, when younger, long-term solutions such as Adrien Rabiot and Frenkie de Jong look likely to join.

As is so often the case, there is very little value to be found in the transfer market in January, and strikers are at a premium. There were suggestions that Barcelona would make a move for Álvaro Morata, but as he cost Chelsea north of £60m just 18 months ago, he was not going to come cheap. There was no guarantee that he would fit into Barça’s style, and even less chance that he would be happy playing third or fourth fiddle.

So the attention turned to B and C-list strikers. Fernando Llorente, Carlos Vela and Cristhian Stuani were reportedly considered by the Barça hierarchy, but apparently Boateng’s aptitude in the false nine role at Sassuolo marked him out ahead of his competitors.

This cautious approach to transfers marks a change in tack for Barcelona, who have been spending money like there’s no tomorrow in recent windows. Since the summer of 2017, Barça have spent just shy of half a billion euros on transfers, more than any other club in the same timeframe.

Maybe they’ve decided that now is the time to tighten their belts after such a splurge. Their only other January signing so far, Jeison Murillo, has arrived on more or less the same terms as Boateng, which suggests an unwillingness to part with any significant chunks of cash.

Centre-back Murillo has joined on loan from Valencia for an initial €1.2m, with an option to buy for €25m. Like Boateng, he is not a stellar name, but is adequate short-term back-up in an area lacking squad depth at a fraction of the cost of a more high-profile player.

It may seem strange seeing Boateng crop up at Barcelona in the autumn of his career, but neither party has anything to lose from the transfer, and both parties have something to gain.

If Boateng’s presence allows Barça to give the over-worked Messi and Suárez an occasional rest in their pursuit of domestic and European success, then he will have served his purpose. If he plays well when he is called upon, he could earn himself a permanent move to one of the biggest clubs in the world.

It may be one of Barcelona’s strangest ever signings, but it could turn out to be one of their most sensible.