Home All The News Boothroyd on England U-21s: ‘We’ve let the country down’ 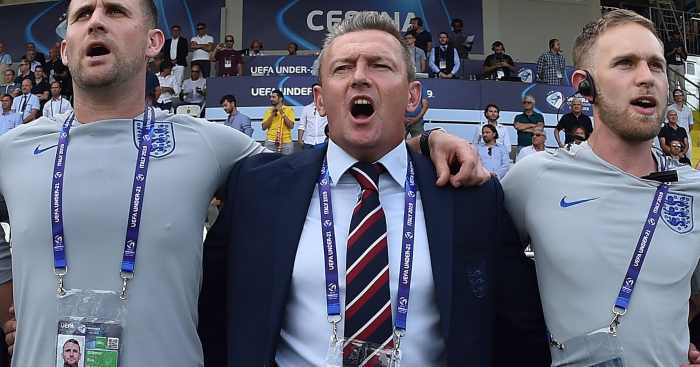 Boss Aidy Boothroyd vowed he will not walk away after England Under-21s’ early exit from Euro 2019.

The Young Lions lost 4-2 to Romania in Cesena to crash out of the tournament following a second straight Group C defeat.

Boothroyd’s selection backfired after he benched Phil Foden in a game England had to win only for them to ship four goals in the final 14 minutes.

Demarai Gray and Tammy Abraham twice drew England level briefly during a breakneck finish but it was not enough and France’s 1-0 win over Croatia confirmed England’s elimination.

Boothroyd only signed a contract extension, taking him through until Euro 2021, last month and insisted he would not quit.

“I’m not going anywhere. They will have to carry me out,” he said. “It is important that we have a proper debrief about it and not just make a throwaway comment.

“It is important to pick the bones out of this. If we are going to win a tournament like this it is clear there are things we have to improve on.

“Some things have gone really well and there are some things we have to improve on.

“As you can imagine, I am absolutely gutted. Two years of preparation in qualifying and we have gone out in a way that is very, very disappointing.

“Even when they came back into it and scored their first goal, I still fancied us. It is very, very disappointing as we had been working towards this.”

Dean Henderson has made a howler here to all but give Romania the win!

Just the third goal in the space of five minutes…

Jonjoe Kenny brought down Coman to concede Puscas’ penalty opener but Gray fired in off the post to make it 1-1 with 11 minutes remaining.

Goalkeeper Dean Henderson then let Coman’s 89th-minute shot through his hands to allow Romania to make it 3-2 before the midfielder’s fine 20-yard half-volley sealed victory.

And Manchester United goalkeeper Henderson insisted England are still a better side, despite defeat.

“Looking at the squad and players, I still believe we are the best team in the tournament.

“It is a shame because we said in the team huddle that for some of us it will be the last opportunity to play in a major tournament for England.

“With the group of players we have really under-achieved. We wanted to come here and win this tournament.

“Whoever goes on to win the tournament realistically we know we can beat as well. It is a shame. We have let ourselves down. We have let the country down.”