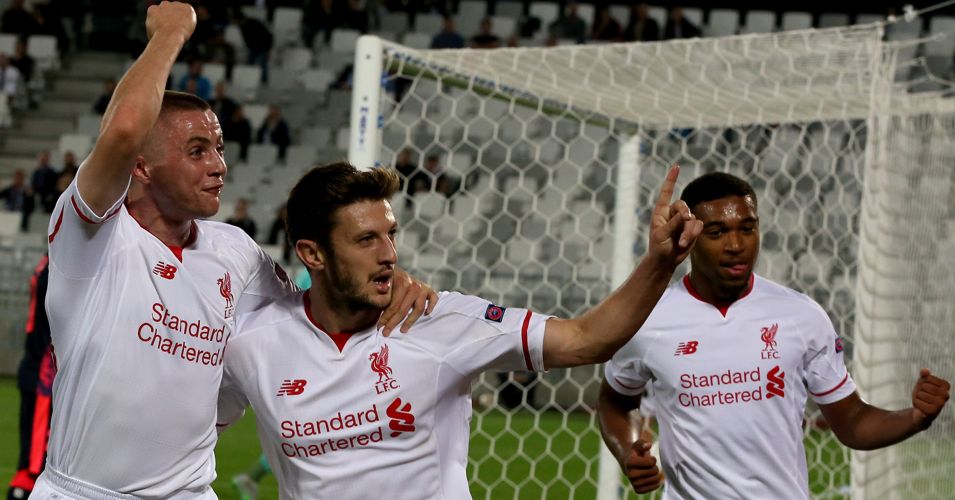 Adam Lallana’s sublime strike was cancelled out by a late equaliser as an inexperienced Liverpool side were held by Bordeaux in their Europa League opener.

Lallana put the visitors ahead in the 65th minute after nutmegging defender Pablo before applying the finish beyond keeper Cedric Carrasso.

The Reds could not hold out for their first win in four games however, and succumbed to substitute Jussie’s goal 10 minutes from time.

Philippe Coutinho – one of few first-teamers on show – and Danny Ings both tested the French side with decent efforts, but Bordeaux held out to secure a point in the Group B opener.

Mamadou Sakho impressed in his first Liverpool appearance this season, and was even handed the captain’s armband as Brendan Rodgers reverted to his trusty 3-4-2-1 formation on Thursday night.

Sakho formed a mismatched partnership alongside Kolo Toure and Joe Gomez at the back, with Jordon Ibe at right wing-back and Alberto Moreno returning on the opposite side.

In central midfield were Emre Can and Jordan ‘The Rock’ Rossiter, with Coutinho and Lallana sitting behind striker Divock Origi on his first start in Liverpool red.

Pedro Chirivella and Cameron Brannagan also came on for their senior debuts and impressed, with Rodgers’ side generally on top throughout.