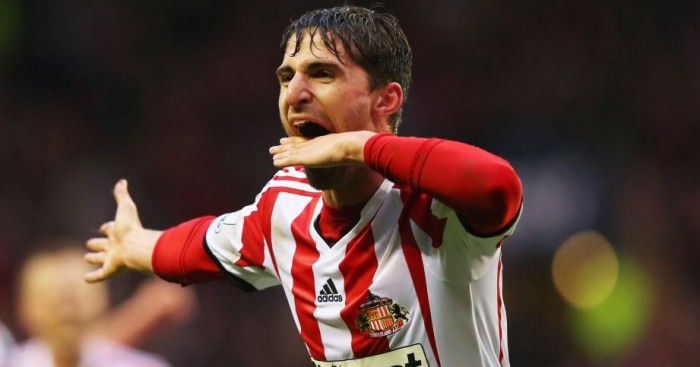 Fabio Borini admitted he was “emotional” upon sealing his return to Sunderland from Liverpool in a deal thought to be worth around £7million.

The Italian international, who enjoyed a fruitful loan spell at the Stadium of Light during the 2013/14 season, has signed a four-year deal with Dick Advocaat’s side.

Borini became a fan favourite during his initial temporary stay on Wearside, and will link up with fellow new signings Sebastian Coates, Jeremain Lens, Younes Kaboul and Ola Toivonen, with the fee for Borini understood to rise to around £10million with clauses.

Talking to the Black Cats’ website on his return, the 24-year-old said: “I am delighted to be back at Sunderland. It is a club I know really well from my time here previously.

“It will be emotional for me to play at the Stadium of Light again and I can’t wait to get back on the pitch as a Sunderland player.”

Head coach Advocaat added: “Fabio is a great addition to the squad who will make our front line stronger. He can play in a number of attacking positions which is a huge benefit to the team.”

The club’s sporting director, Lee Congerton, also praised the deal, saying: “Fabio is a player who I’ve known since he was 15 years old and I was fortunate enough to help recruit him to Chelsea.

“He has developed into a Barclays Premier League striker which we have already seen from his previous loan spell at the club, and we are delighted to have him here on a permanent basis.”