Home Swansea City Born in the USA…and what’s wrong with that? 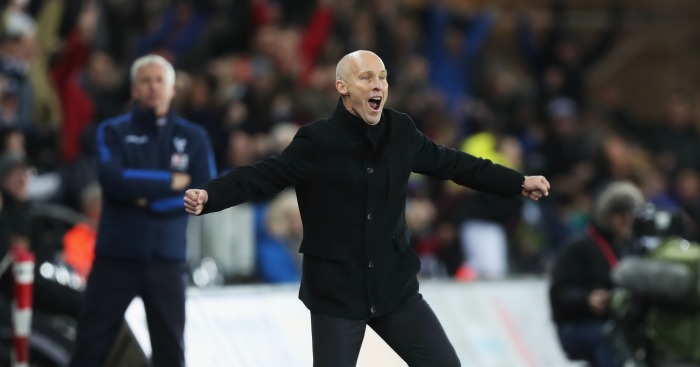 Bob Bradley – long a leading light of American coaching – being appointed Swansea City manager caught some of our media’s typically slack-jawed suspects by surprise. “Does he know the league?” asked those who would rather have seen Ryan Giggs appointed.

But things haven’t gone well so far for Bob, so you know those critics are already circling like vultures around a wounded animal. Bradley is one of the bookies’ favourites to get his P45, even though his side did provide a magnificent game on Saturday, albeit one of massive defensive ineptitude from both sides.

Swansea seem to have lost their way as a club and the playing staff isn’t exactly choked with talent. Had he been Ryan, this would have been the excuse given for his poor start. But he’s not British, he’s an American who ‘doesn’t know the league’. And as Dean Saunders helpfully reminded us on Saturday: “His accent isn’t helping him.”

Being American is a problem, is it? Is that what you’re saying? It is, isn’t it? Christ. Is Alan Pardew’s accent helping Crystal Palace? How about Mike Phelan’s drone? And who isn’t it helping him with exactly?

Americans talking about football ha ha…what do they know about it, they call it soccer. Ha ha…mugs.

We shouldn’t be surprised at such rather lame narrow-mindedness because Deano is right; his accent doesn’t help him because there’s a constant strain of anti-Americanism among British football folk, who seem to consider USA a joke when it comes to the beautiful game. And if you look at how many USA managers and players there are over here, you can see evidence that does hint at an anti-American default.

Bradley aside, the only other American manager in all four leagues is the rather good David Wagner at Huddersfield, and he’s half-German. There are just six Americans on Premier League club books and only one, Geoff Cameron at Stoke, is playing regularly. Three have yet to turn out at all. There are just nine Americans in the lower leagues.

In the last 15 years, there have been a few USA players who we have taken to our hearts, notably the magnificent Terminator that was Brian McBride, Clint Dempsey, Landon Donovan and the goalkeepers union of Brad Friedel, Tim Howard, Marcus Hahnemann and Kasey Keller, but they’re very few and far between.

And this from a country that has a World Cup record over the last 15 years that is only a little worse than England’s and whoreached the final of the Confederations Cup in 2009 (managed by Bradley), losing out by the odd goal to Brazil. No-one is trying to make out USA is a soccer powerhouse, but equally, they’re no mugs. They’re not some footballing third world.

But the way some talked of Bradley was as though he was an innocent abroad who couldn’t possibly know anything about the Premier League, despite it being the most popular league on earth.

I like Bradley. He’s a thinker. He has intensity and knowledge. However the Swansea gig works out, he shouldn’t be used as some sort of litmus test for American managers. British managers get to be inadequate time after time, but I fear that luxury will not be extended to Bradley and his fellow countrymen.

Some have always sniggered behind their hands at the American use of the word ‘soccer’, indignantly correcting them, when soccer has been in use in Britain since the beginning of the modern game in late Victorian era. It’s not some sort of yank invention. In fact, all through the 60s and 70s, football was routinely referred to as soccer. We collected ‘Soccer Stars’ and read such magazines as World Soccer, Soccer Review, Soccer Monthly, London Soccer and Top Soccer.

In other words, if you’re trying to use the word ‘soccer’ as a stick to beat Americans with, you’re only showing your own ignorance.

And if you listen closely, you can hear how American soccer language is getting incorporated into ours. ‘Shut-out’ isn’t unusual now, and neither is the admittedly awful ‘bested’. But we don’t take the pish out of the football vocab of other foreign countries, we reserve this only for Americans. Maybe people fear being called racist if they laugh at how other shades of foreigner talk but with America, it’s a free hit for boring people who think they’re being clever.

American soccer culture is, in many ways, quite different from English football. It tends to be far more middle-class and better educated, both academically and in its understanding of the world game. A big soccer fan in America will know more about world football than most of us and certainly more than many of Bradley’s critics.

Many of us have watched a Premier League game on a TV in a bar in Somewheresville, USA and found ourselves talking to a local who likes soccer. They support Fiorentina, because their uncle is Italian, they follow Chelsea because their sister lives in west London, but their best mate is Spanish so they look out for Valencia’s results. When they love football, they really bloody love it and they put the hours into getting up to speed and staying there.

It’s not really tribal and as a long-time visitor and ex-resident of California, that was always what I loved about it. I also liked how it was seen as left of the frame, slightly out of focus and certainly not a mainstream jock sport.

So why are there so few American managers over here? Why is Bradley the first in the top flight? Is anyone seriously going to argue that Bruce Arena couldn’t be a good manager here? I mean, he’s called Arena.

Is there some sort of cultural snobbery that leads to American players and managers being sniffed at rather suspiciously? Saunders’ comment rather suggests there is. The attitude to Bradley has been little more than insulting. The very idea that he wouldn’t know the league inside and out, after a lifetime in football management at home and abroad, is ridiculous. This idea of being from a country means you somehow innately ‘know’ it, whatever that word even means, is blinkered, mind-in-neutral nonsense, albeit nonsense we regularly hear.

Plenty of the same old failed managers and players are on the football merry-go-round. Are we to believe that all of them are better than the best American managers and players? That seems very unlikely. There are some awful players in the Premier League, but almost no awful Americans. And actually that’s what suggests a bias. It’s a huge country with substantial managerial and playing resources, which look rather untapped at the moment.

Just because their league is where our old players go to die, that’s no reason to dismiss the footballing talents of a nation of 350 million people.