Home Middlesbrough Boro: Made in England, improved by Europe 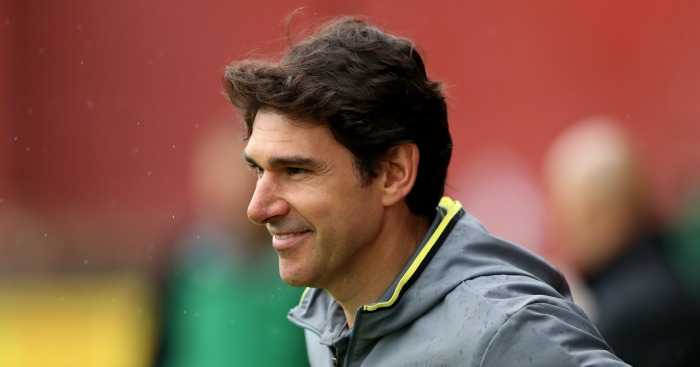 “Since I arrived to this club, back in Spain people were speaking about me, about the club,” said Aitor Karanka in attempting to explain how Middlesbrough have somehow signed a Premier League winner in Alvaro Negredo, a goalkeeper who has won six La Liga and three Champions League trophies in Victor Valdes and an experienced Champions League right-back in Antonio Barragan. “When there are Spanish coaches working abroad, everybody in Spain follows them.”

You cannot imagine that Sean Dyche enjoys quite the same privilege in Kettering as Karanka enjoys in Spain. Indeed, Burnley manager Dyche has spent more on two players relegated from the Championship with Charlton this summer than Karanka has spent on a Spanish triptych with extensive La Liga experience. Wages are of course an issue with Boro choosing to spend more extensively than the frugal Clarets, but even with a fatter wallet, Dyche’s first conversation with a Spanish agent would have to start with a potted history of Burnley; it would probably be a short conversation.

Karanka’s nationality undoubtedly gives Boro an advantage in European transfer terms over their fellow promoted sides, but there are established Premier League clubs who will glance at Middlesbrough’s extensive summer transfer business with some envy. All but a handful would have welcomed Negredo on loan, while few would have turned down the chance to sign the exciting Viktor Fischer for less than £4m. And who would not want the most prolific tackler in Serie A? Not for Boro the age-old promoted club shtick of buying Championship players who impressed against them last season; they have signed quality footballers who might well balk at joining Swansea or West Brom.

If Boro’s possible survival will be continental, their promotion was made in England. Of the most-played XI in the Championship last year, seven were born in England and another (Daniel Ayala) has been here since the age of 17. There has been Spanish evolution rather than revolution, with Karanka’s key signings coming from the northern provinces of Huddersfield, Blackburn and Leicester rather than his homeland. He brought in horses for Championship courses but is now harnessing thoroughbred caballos for his first Premier League campaign. What he has created is a combination that looks fascinating both on paper and the training ground.

“Two and half years ago if someone had told me that now, two and half years later, I would be with Alvaro Negredo, with Victor Valdes, with de Roon, with Clayton, with Adomah all playing on the same training ground it would be difficult to believe,” said Karanka but you suspect that he would have dreamed of exactly this scenario – a settled, largely British squad sprinkled with the kind of players that only join a club the size of Middlesbrough if the man at the helm can talk of Champions Leagues won as a player and working with Jose Mourinho as a coach.

While Dyche is understandably getting his back slapped on the Monday Night Club for his commendable exploits with little Burnley, Karanka is busy building a squad that could survive in the Premier League. The bookies still have them as one of their three favourites for relegation, but we suspect that West Brom and Watford fans might compare squads and disagree.