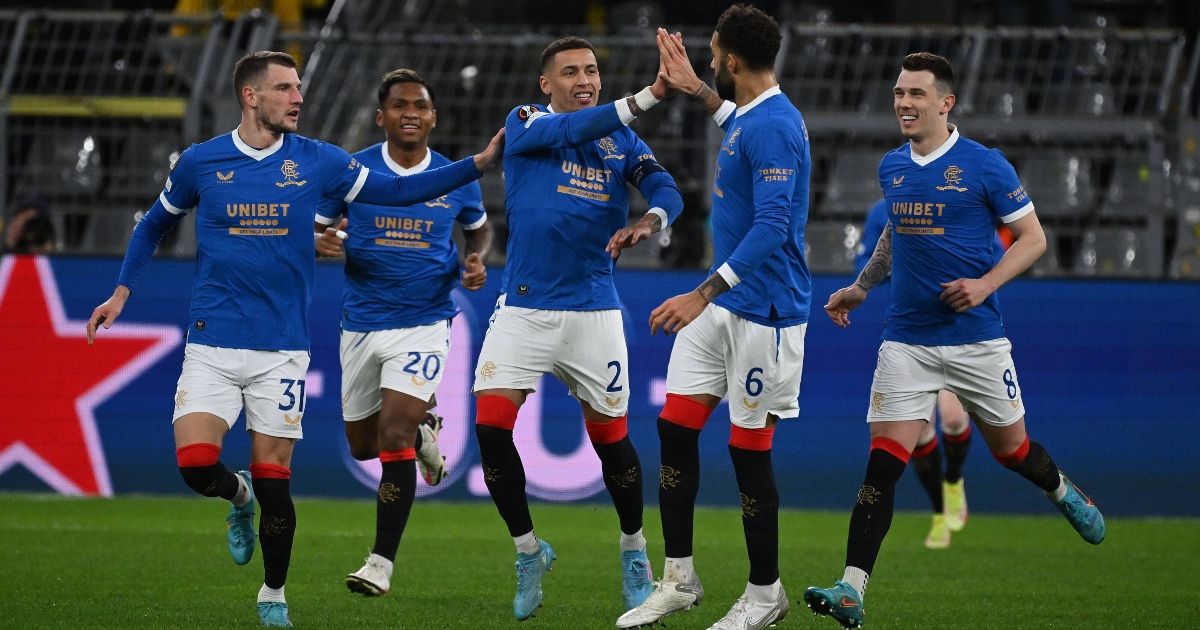 In an incredible encounter in the Westfalenstadion, Gers captain James Tavernier scored a VAR-awarded penalty for handball in the 38th minute before striker Alfredo Morelos knocked in the second three minutes later.

Barcelona look worryingly at home in the Europa League

There were only 10,000 fans inside the ground due to local Covid-19 restrictions and the 9,500 home supporters could barely believe what they were witnessing as Light Blues midfielder John Lundstram guided in a third after 49 minutes, only for England’s teenage international Jude Bellingham to pull a goal back for the German giants a minute later.

Morelos’ drive from 12 yards was helped in by home defender Dan-Axel Zagadou – who conceded the penalty – to stretch the Scottish champions’ lead again before Raphael Guerreiro’s 82nd counter made it 4-2 which leaves Giovanni Van Bronckhorst’s men with the advantage going into the return game at Ibrox next Thursday.

After changing the whole team for the Scottish Cup win over Annan Athletic at the weekend, Van Bronckhorst brought all the big guns back with only left-back Borna Barisic keeping his place.

There was a boost for Rangers before the game with the confirmation that Dortmund’s star striker Erling Haaland remained sidelined with an adductor problem albeit there were plenty of familiar faces in the home side.

The Ibrox side started encouragingly with their high press unsettling the hosts and they should have taken the lead in the 10th minute when attacker Ryan Kent slipped in Barisic.

The full-back raced into the box but his close-range shot struck the foot of goalkeeper Gregor Kobel and spun out for a corner which came to nothing.

Dortmund appeared to settle and – in the 26th minute – Guerreiro’s cut back found no takers.

There was another let off for the away side in the 32nd minute when a back-heeled effort from home captain Marco Reus made its way towards goal before Barisic cleared at the second attempt.

Then came real drama. There was some puzzlement when French referee Clement Turpin stopped the game before going over to view the monitor in a VAR check and, when he saw that Zagadou had clearly handled a Tavernier corner, he pointed to the penalty spot.

The Gers right-back sent Kobel the wrong way with his spot-kick to send 500 visiting fans wild with delight.

Morelos’ shot from an angle was spilled by Kobel for a corner and when Tavernier’s delivery came over, midfielder Joe Aribo flicked the ball goalwards, the striker had the easiest of tasks to tap in from almost on the goal line.

Dortmund teenagers Giovanni Reyna – son of former Rangers midfielder Claudio and named after current boss Van Bronckhorst – and Youssoufa Moukoko came on for the second half to replace Axel Witsel and Brandt and they watched helplessly after Kent displayed some dribbling magic before setting up Lundstram to curl the ball into the net from 22 yards.

A minute later Bellingham reduce the deficit with a goal similar to that of Lundstram’s effort, a lifeline, taken away in the 54th minute when Morelos’s shot went in off Zagadou after an incisive breakaway led by Kent. It was breath-taking stuff.

Desperate Dortmund tried all they could to get back and – with eight minutes remaining – Guerreiro beat McGregor with a tremendous long-distance drive but Rangers saw out five additional minutes for a sensational result which will reverberate around Europe, albeit it would be folly to think the tie is over.