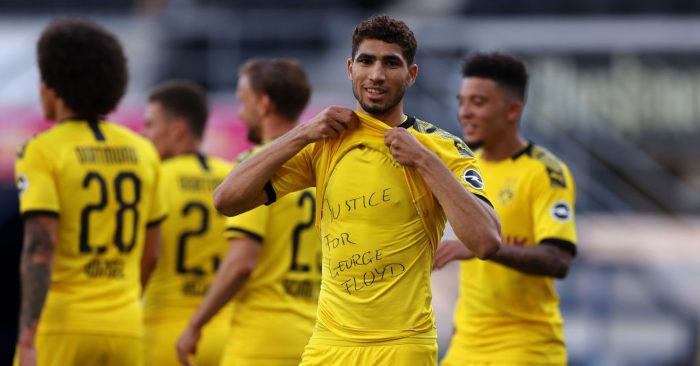 Borussia Dortmund wing-back Achraf Hakimi has been ‘seduced’ by Manchester United but still prefers a move to Bayern Munich, according to Spanish newspaper AS.

Hakimi was mentioned along with Jadon Sancho by Dortmund coach Lucien Favre as he admitted that he could be robbed of two of his first-team stars this summer.

“Of course, they could stay with us, which would be very good for me. But we’ll see what we’ll do, whether it’s in defence, midfield or attack.”

The Moroccan international is on loan at Dortmund from Real Madrid, who are said by AS to want more than £50m this summer for a player who has impressed Zinedine Zidane during his loan spell.

Hakimi wants to stay in the Bundesliga with Bayern Munich – especially as they are apparently offering wages of around £120,000 a week. But those numbers would be matched by Manchester United.

It is more likely that United are being used by the Spanish media – Manchester City were listed as suitors on Monday – to drive up the price for Bayern Munich.