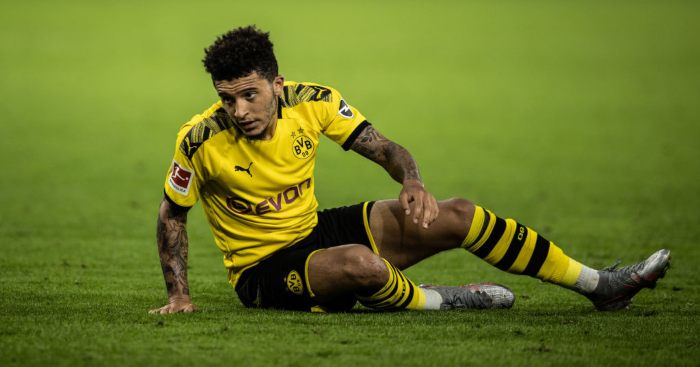 Borussia Dortmund have given Man Utd a deadline for sealing a deal for Jadon Sancho or the winger is likely to remain in Germany next season, according to reports.

The Red Devils have been heavily linked with Sancho over the last year after he backed up last season’s performances with another 20 goals and 18 assists in all competitions this term.

Reports on Saturday claimed a deal has been agreed ‘in principle’ between Man Utd and Sancho, which would see the player earn £140,000 contract initially, eventually rising to £200,000 over five years.

FEATURE: Ten of the greatest low-scoring strikers in history

However, the fee is still causing issues with Sky Sports claiming earlier this month that Man Utd were only prepared to pay £50m for the England winger, which is less than half Dortmund’s valuation.

A couple of weeks ago a report in the Daily Mail reckoned that United were in no rush to do a deal with Dortmund due to the lack of competition for the 20-year-old.

The Daily Mail added at the time that Man Utd are ‘ready to bide their time this summer to put pressure on the German club to reduce their demands’.

However, it seems now that the German side are getting frustrated as they have set the Premier League club a date to sign Sancho by.

Head of Football at Sport Bild, Christian Falk, claims that Dortmund have issued Man Utd an ‘ultimatum’ and that ‘if United wants to bid for Sancho, the deal must be done’ by August 10th.

Update @Sanchooo10: Ultimatum from @BVB to @ManUtd. If United wants to bid for Sancho, the deal must be done til August 10th @BILD_Sport