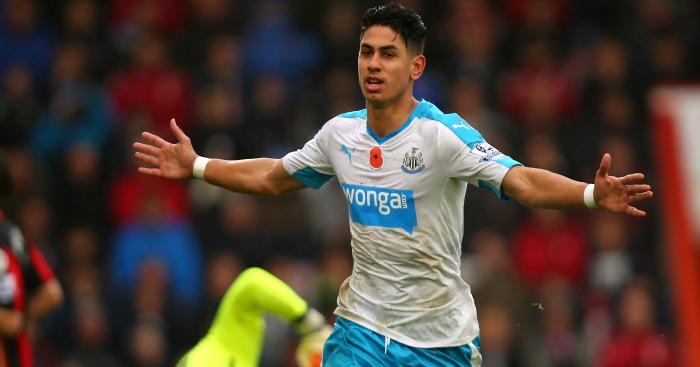 Newcastle pinched their first away success of the season with a 1-0 win, despite being dominated by Bournemouth at Dean Court on Saturday lunchtime.

The hosts had 65 per cent possession and managed 20 shots to Newcastle’s two, but a combination of woeful finishing and good goalkeeping from Rob Elliot – who played through the pain – meant it was Steve McClaren’s visitors who chalked up a crucial victory on the south coast.

Despite dominating from the early stages at Dean Court, Bournemouth, as they have done so often this season, fell behind to Ayoze Perez’s slick 27th-minute strike.

The hosts had been by far the better of the two strugglers with Josh King causing problems for the Newcastle back four, but Perez punished the Cherries after a fine flick from Aleksandar Mitrovic had allowed Georginio Wijnaldum to put the frontman in the clear.

Mitrovic’s intricate flick found Wijnaldum and he fed a neat ball into the onrushing Perez, who finished past Adam Federici despite a touch from the Aussie keeper to give Newcastle their first away victory since a 3-0 triumph at Hull City on January 31.

Elliot pulled off at least five crucial saves to frustrate Eddie Howe’s creative but toothless Bournemouth – and that after remaining a doubt right up until kick-off.

McClaren did not need to call on the youngster, however, as Elliot eased Newcastle’s goalkeeping woes with Tim Krul and Karl Darlow sidelined.

Bournemouth laid consistent siege to his goal in a one-sided first-half, only to turn around trailing to the visitors’ solitary strike.

Josh King and Matt Ritchie will kick themselves for weak finishes, while Adam Smith fired just over with the goal at his mercy.

Elliot’s best save of the half came from Dan Gosling’s far-post header – the 29-year-old stopper cementing his inspired showing with a smart point-blank save.

Bournemouth should have easily capitalised on Newcastle’s midfield misalignment and defensive disarray – instead McClaren’s men rode their luck and grabbed the lead.

Mitrovic’s flick opened the space for Wijnaldum to play in Perez, with the Spain forward toe-poking home.

Federici may well have kept out the tame effort, but Newcastle’s battling horde could hardly have cared less.

The second half opened in exactly the same vein as the first, with Elliot again denying the hosts.

Ritchie raced onto a dangerous cross to head goalwards, only for the Newcastle goalkeeper to tip over the bar.

Gosling fluffed another effort to continue the trend and then Junior Stanislas blasted wildly over the bar in acres of space.

Chancel Mbemba barged Andrew Surman off the ball in the box just past the hour, but referee Lee Mason waved away Bournemouth’s penalty calls.

After so many half-chances and missed opportunities, the hosts’ heads finally dropped, leaving the tie to peter out somewhat.

A curiously-high tally of six additional minutes rallied Bournemouth slightly, but still Newcastle clung on for a victory to move themselves out of the relegation zone.