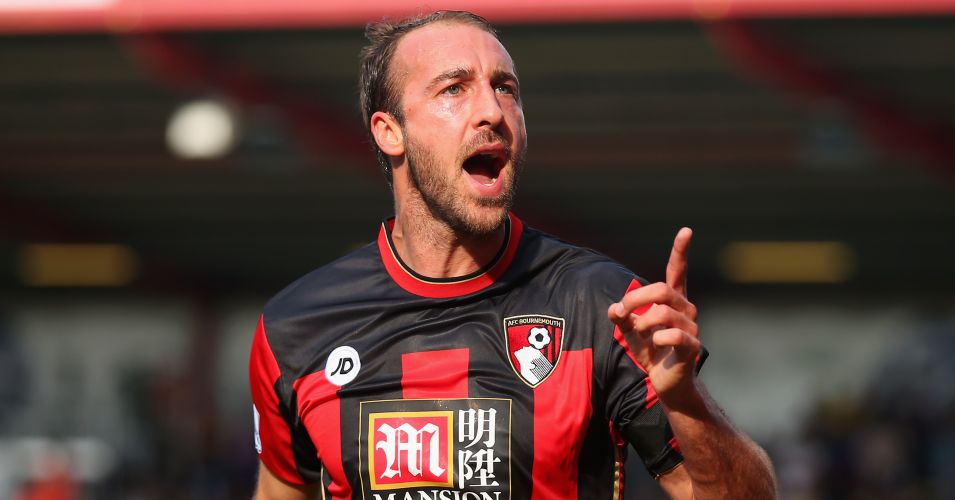 Glenn Murray scored but then missed a penalty as Bournemouth drew 1-1 with Watford in the Premier League.

Murray opened the scoring on his full debut for Bournemouth in place of the injured Callum Wilson, with the £5million summer signing heading home Matt Ritchie’s cross just before the half-hour mark.

Watford struggled to create many opportunities to equalise against their fellow newly-promoted side, but were gifted an equaliser on the stroke of half-time after Artur Boruc inexplicably passed the ball to Odion Ighalo, who rounded the Cherries keeper to score his fifth Premier League goal of the season.

Murray missed the chance to seal all three points for Bournemouth late on as his penalty was saved by Heurelho Gomes, with both sides settling for the draw.

Former Crystal Palace striker Murray had already looped one header onto the roof of the net before opening the scoring, but made no mistake when presented with a carbon copy opportunity just before the half-hour mark.

Simon Francis reached the byline and laid the ball back to Matt Ritchie, who swung it in just as Murray tip-toed in behind a leaden-footed Hornets defence to guide his header home.

Murray was lucky to make it to half-time on the pitch, however, after escaping with a yellow card for a vicious tackle on Etienne Capoue, with whom he had clashed off the ball moments earlier.

But moments later Watford gained revenge of their own with their first chance of the game, an opportunity which was entirely of Boruc’s making.

The keeper gathered a routine backpass from Sylvain Distin but, as he attempted to play it back to the defender Ighalo intercepted, skipped past Boruc and rolled the ball into an empty net.

Murray had the chance to nod Bournemouth back in front after the interval, this time from a Francis cross, but Gomes tipped his header over the top.

From Almen Abdi’s corner, the ball fell to Ben Watson whose fierce volley crashed back off the crossbar.

Boruc partly atoned for his error with a decent stop after Ikechi Anya burst through, while Gomes was called into action with a stunning save to keep out Cook’s overhead kick.

It looked as though Bournemouth would snatch the win when Capoue tripped Adam Smith in the area, but Gomes had other ideas as he dived to his left to palm out Murray’s penalty and preserve a point.