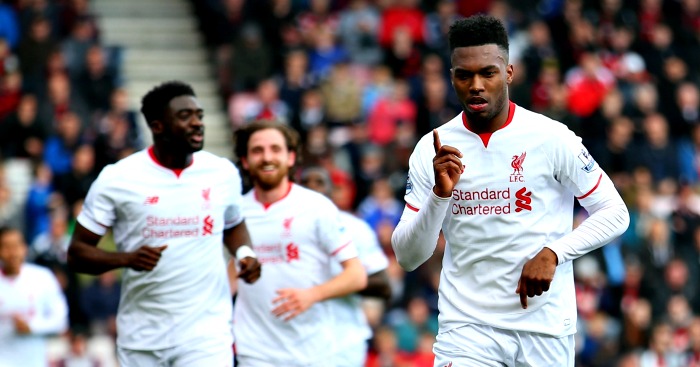 Liverpool made ten changes to their starting line-up but still beat Bournemouth 2-1 on Sunday.

Roberto Firmino was the sole survivor from the Reds’ dramatic Europa League victory over Borussia Dortmund on Thursday, and the Brazilian opened the scoring in the first half, tapping home after Daniel Sturridge’s effort was saved by Artur Boruc.

The Reds doubled their lead before half-time through Sturridge, who headed in Jordon Ibe’s cross.

Josh King scored late on for Bournemouth, but the Cherries could not quite find an equaliser.

Sturridge ensured he remained in contention to feature for England at Euro 2016 with his goal. The emergence of Liverpool team-mate Divock Origi and compatriots Jamie Vardy and Harry Kane have appeared to reduce Sturridge’s importance to both club and country.

But the injury-hit striker demonstrated his exceptional natural ability to create their first goal and score the second in the pursuit of the three points that took his team to joint-seventh in the Premier League.

Liverpool remain capable of reaching the top six, and their recent improvement under manager Jurgen Klopp suggests they will finish there if he takes their domestic fixtures seriously enough. A vastly weakened starting XI showed he is prioritising the Europa League, however, and did much to highlight the extent to which Bournemouth under-performed.

Klopp made ten changes to the team which so impressively defeated Borussia Dortmund 4-3 on Thursday, including giving goalkeeper Danny Ward his debut, but even amid their inexperience, Bournemouth – who appear to have relaxed since last month’s 3-2 defeat of Swansea – again played like a team confident their Premier League status is secure.

Their casual approach was demonstrated in the opening minutes when Andrew Surman carelessly conceded possession to Firmino, from where the Brazilian played in Sturridge – who threatened when goalkeeper Artur Boruc saved his powerful, first-time shot.

If that was a sign of the striker’s desire, having been a substitute when Origi started against Dortmund, he showed his undiminished class and belief in the build-up to his team’s 41st-minute opening goal.

With his back to goal from inside the area and few opportunities available, Sturridge produced a powerful backheel towards goal that Boruc could only parry to Firmino – the forward tapped in with an ease which was only matched by Liverpool’s second, six minutes later.

The promising Jordon Ibe crossed to Sturridge from a left-wing free-kick and the striker headed in under minimal pressure.

In the second half, when through on goal with time and space after Joe Allen’s through-ball, Sturridge sent a classy chip beyond Boruc but just against the outside of the post, and later struck the near, left post after creating his own space.

He may reflect he should have ended the game with a hat-trick, particularly with Bournemouth so poor, but crucially he sent a timely reminder to both Klopp and Roy Hodgson that he is a goalscorer of the highest calibre.

For Bournemouth, the only real positive came with King’s exceptional consolation goal in the third minute of second-half stoppage time. After showing his composure to chest and control a high ball on the edge of the area, he turned and powerfully shot into the bottom corner to deny Ward a debut clean sheet.