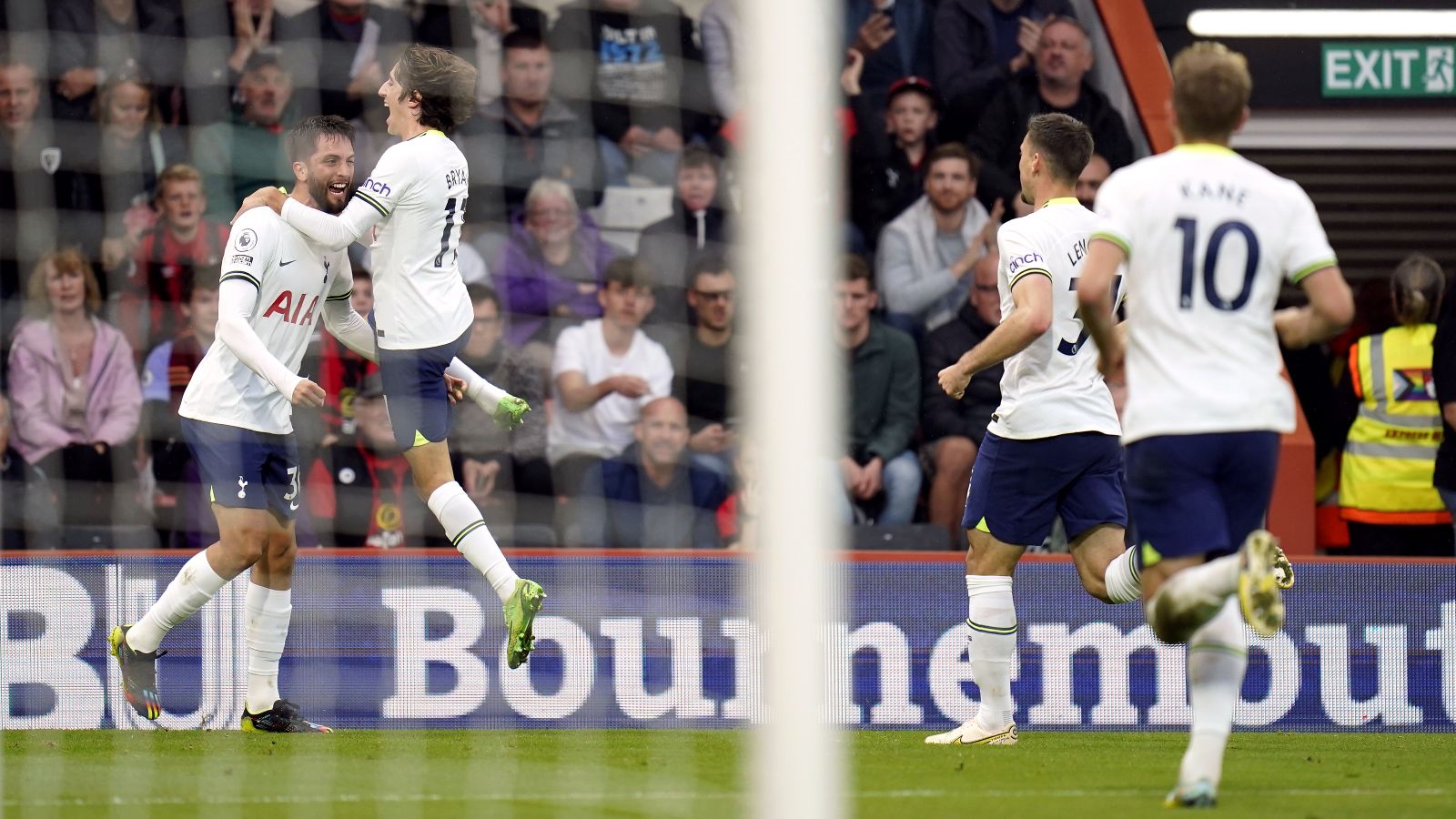 Antonio Conte’s decision to rest players for next week’s game against Marseille initially backfired as Kieffer Moore’s brace put the hosts 2-0 up.

Ryan Sessegnon started the fight back with his goal in the 57th-minute. Ben Davies levelled before Bentancur’s volley late on sealed all three points for Tottenham.

It keeps the visitors in third spot in the Premier League and lifts spirits ahead of their trip to Marseille, where a point will send them through to the last 16 of the Champions League.

Conte had hinted changes could be on the horizon given Spurs’ crucial clash on Tuesday and made six in total with Eric Dier rested for the first time this season and Bentancur also on the bench.

A new-look back three were called upon with Davinson Sanchez, Clement Lenglet and Davies partnered together and Bournemouth immediately set out to get at them.

Moore headed over an early corner before Marcus Tavernier provided a glimpse of his ability with a mazy run that ended with a tame shot straight at Hugo Lloris.

Spurs were able to force four corners during the opening quarter of an hour but looked sluggish and were punished in the 22nd-minute.

Pierre-Emile Hojbjerg gave the ball away and the Cherries produced a rapid counter-attack with Dominic Solanke putting Tavernier away down the right. He managed to suck Sanchez out of position, which left Moore free to curl home first-time for his second goal of the season.

It was a deserved opener for the hosts and Lloris had to be alert two minutes later to thwart another driving Tavernier run.

Tottenham did improve towards the end of the half with Oliver Skipp testing Mark Travers, back in goal for the first time since the 9-0 defeat at Liverpool in August, in the 33rd-minute and Marcos Senesi headed against his own post soon after from a Son Heung-min cross.

A lack of quality in attack remained the visitors’ Achilles heel and that was summed up perfectly when Emerson Royal sliced an effort high up into the air which landed on the roof of the Vitality Stadium to ensure it stayed 1-0 at the break.

Conte reacted by introducing Lucas Moura for Skipp and switching to his favoured 3-4-3 system, but Bournemouth doubled their lead five minutes into the second half.

Ex-Tottenham defender Adam Smith produced a loop cross from the right and Moore stooped low to head home off the crossbar after he beat Emerson to the ball.

It was turning into a memorable afternoon for former non-league forward Moore but Spurs started their comeback with 57 on the clock.

Hojbjerg produced a superb defence-splitting pass for Sessegnon, who ran away from Tavernier and burst into the area before his low effort went in off the post to reduce the deficit.

Sessegnon had been set to come off before his goal but stayed on the pitch with Sanchez and Yves Bissouma hauled off for Dier and Bentancur.

Ivan Perisic, who had been stripped to come on before Sessegnon’s strike, was introduced for Emerson soon after and made an impact with 17 minutes left at the Vitality Stadium.

Perisic produced a superb corner to the back post where Davies headed home after Bournemouth goalkeeper Travers had failed to claim the cross.

Spurs were not ready to settle there and Son was thwarted by Travers before Bryan Gil got the nod from Conte, who minutes later saw his side’s stoppage-time effort count.

From Tottenham’s 19th corner of the match, Son’s cross was blocked and fell perfectly for Bentancur, who volleyed home from eight-yards to spark wild celebrations as the visitors returned to winning ways.