Home Competitions Championship Norwich City News Bournemouth 3-0 Norwich: Howe, do you like it? 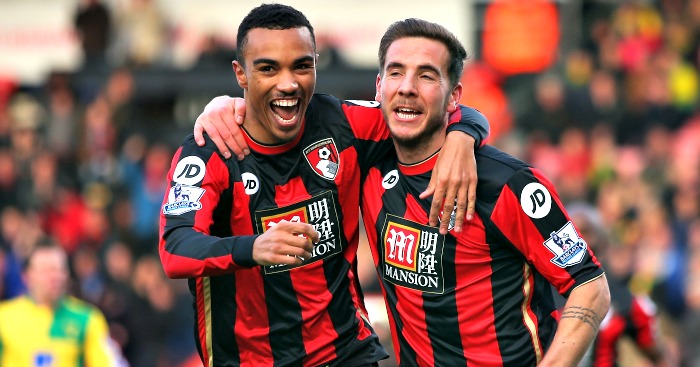 Bournemouth opened up a five-point gap on the Premier League relegation zone with a 3-0 win over Norwich.

Dan Gosling opened the scoring for Eddie Howe’s men on 10 minutes, with Charlie Daniels’s penalty and a first goal for Benik Afobe deciding matters between two of this season’s promoted sides.

Bournemouth now sit 15th, five points above 18th-placed Swansea, while Norwich are one point and one place behind the Cherries.

Both sides made one change from their midweek defeats. Bournemouth midfielder Marc Pugh came in for the injured Matt Ritchie while Gary O’Neill, sent off against Stoke, was replaced by Matt Jarvis.

Lewis Grabban had been expected to feature against his former club but the forward, who re-signed for the Cherries in a £7million deal earlier this month, was said to be suffering from an illness.

Bournemouth may have suffered a 3-1 home defeat against West Ham on Tuesday night, but there was no sign of any hangover for Howe’s side.

Indeed it was the south coast club – on a winless run of four matches heading into Saturday’s fixture – who came flying out of the blocks.

Afobe fizzed a 20-yard effort over Declan Rudd’s bar with only two minutes gone, before Junior Stanislas’ deflected shot then fell into the hands of the grateful Norwich goalkeeper.

Bournemouth have gained a reputation as fast-starters – having scored six goals inside the opening 15 minutes which is more than any other Premier League club – and with 10 minutes on the clock they increased that tally to seven.

Gosling ghosted unmarked into the Norwich area before Marc Pugh’s pinpoint cross was headed home by the former Everton midfielder. It was Gosling’s third league goal of the campaign and no less than the home side deserved for their early endeavour.

Gosling’s curling left-footed effort then went narrowly wide of Rudd’s right post before Bournemouth probably should have been given the chance to extend their lead from 12 yards.

Daniels, a constant threat down Bournemouth’s left flank, was allowed to drift into the Norwich penalty area and appeared to be grappled to the floor by Russell Martin. The Canaries defender protested his innocence and referee Robert Madley waved away the home side’s appeals.

Madley was back in the spotlight moments before the interval when Rudd scythed down Afobe on the edge of his own box. Harry Arter played Afobe through, and in attempting to clear the ball, Rudd took a wild swing with his right foot, before missing the ball and taking the former Wolves and Arsenal striker down with him. The home crowd chanted for a red card, but Rudd, with Sebastian Bassong and Ryan Bennett in close proximity, was shown only a yellow.

Moments after the re-start and it was Madley who was once more the focus of the home support after Arter fell in the Norwich penalty area. Madley turned down his appeals and the Cherries midfielder was booked for his protests.

Bournemouth, however, remained in the ascendancy and after Pugh’s header was cleared off the line by Martin, Bournemouth were finally awarded a spot-kick.

Vadis Odjidja-Ofoe pulled back Pugh, and Madley had no hesitation in pointing to the penalty spot. Daniels stepped up to double Bournemouth’s advantage and it was no less than Howe’s side deserved.

Afobe, in only his second appearance for Bournemouth, then completed the victory when he tapped home a fine cross from Daniels. The result takes Howe’s men above Norwich into 15th in the table with the Canaries now one point and one place below them.