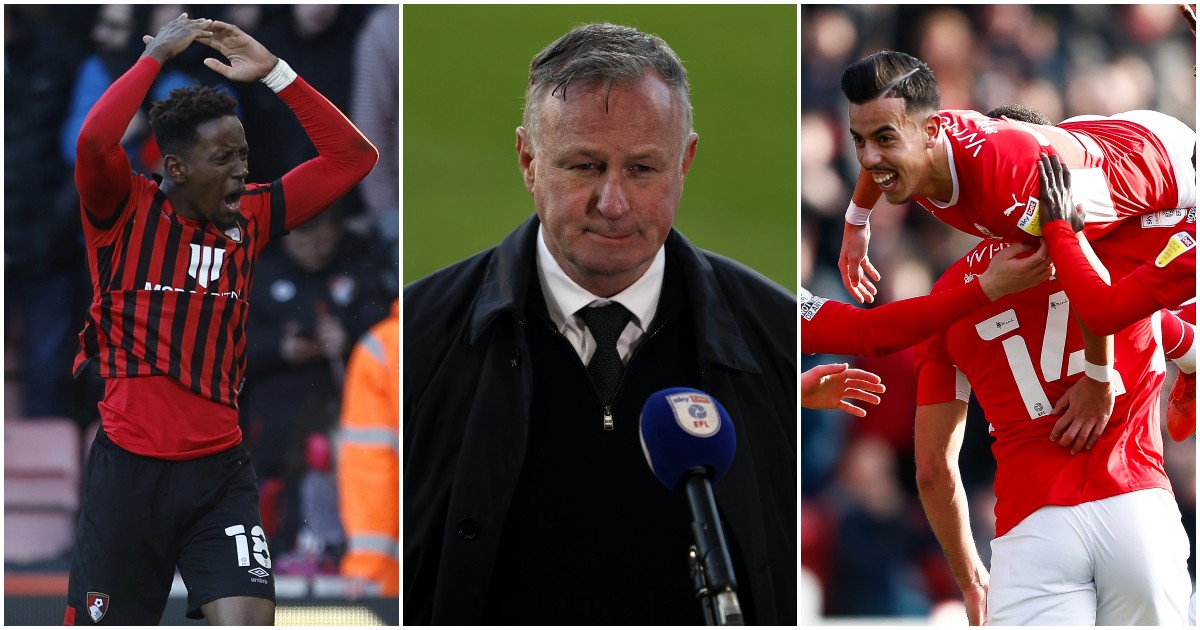 Bournemouth digging deep
Having had their last two games postponed as a result of Storm Eunice, Bournemouth didn’t let the momentum gained from their last playable match wain against Stoke. As was the case against Blackpool a fortnight ago, Bournemouth scored two late goals to snatch a victory from the jaws of defeat. Helped by the Potters being down to 10 men for the final hour of the game, Scott Parker’s side picked up three points once more thanks to two goals in the final 10 minutes.

Having played at least two matches fewer than every other team in the top half and four fewer than Huddersfield directly below them, the Cherries know their two-point advantage over the play-off spots could and should become something more authoritative when games in hand become more favourable points on the board.

It should come as little surprise that the team with the best defensive record in the second tier knows how to dig deep for results. As the business end of the season draws nearer, Bournemouth are once more looking like promotion favourites after a dodgy winter.

Nottingham Forest’s home form
Nottingham Forest’s clash with Bristol City should never have been in doubt. A seventh win from the last nine games at the City Ground made it 11 winless on the road for the Robins. But in a league notorious for being somewhere anything can and often does happen, the most routine of victories was just as exciting as any other for Forest fans who continue to dream of promotion to the Premier League for the first time this millennium.

A good handful of teams will still fancy their chances of a play-off spot, but with five of their six remaining home league fixtures against teams currently in the bottom half, continuing to make the City Ground a fortress could be the difference between a 46-game season and a potential 49-match campaign.

Jake Cooper
Little sums up Millwall better than winning four games in a row and it still registering little more than an eyebrow raise. But they have put together a quartet of victories culminating in the most impressive of all – inflicting just a second defeat for Paul Heckingbottom in permanent charge of Sheffield United.

Match-winning centre-back Cooper has been a mainstay of the Millwall backline for some years now, and has been as impressive at the back as ever with the Lions conceding just twice across their four wins over Cardiff, QPR, Derby and the Blades. A third league goal of the season against play-off hopefuls Sheffield United now means Millwall have added their name to the roster of dark horses hopeful of securing sixth spot. Just having something to fight for at the end of the season will be welcomed by perennial mid-tablers Millwall.

Dark horse derby winners Blackburn
Saturday lunchtime provided a clash between the two more obvious and hopeful dark horses in the race for promotion. Each had suffered recent struggles to dent automatic promotion hopes this calendar year, but also had enough credit in the bank to make the winner of this affair feel a little more assured of their top-six berth. As is often the case with QPR, the match they should have won was where they failed most spectacularly. By the time Reda Khadra’s winner for Blackburn came, Tony Mowbray’s side had gone over nine hours without scoring.

In truth, it was a limp and lifeless performance from QPR, which are occurring with a little too much persistence for fans of the hooped persuasion. It’s back to being advantage Blackburn.

Levi Colwill
It is another team donned in blue and white who have put themselves in third spot above both Blackburn and QPR. Huddersfield are the EFL’s only unbeaten team in 2022 and that record never looked under threat at lowly Birmingham City. On-loan Chelsea defender Colwill proved himself to be a phenomenon in the first half of the season, but hadn’t started since the first game of the calendar year thanks in part to the imperious defensive form shown by the Terriers over January and February.

But with Tom Lees still battered and bruised from midweek heroics, Town fans were reminded why they had fallen in love with Colwill and will almost certainly have their hearts broken when he returns to Chelsea in the summer. At the back, it was status quo for a team who have conceded just twice in their last seven outings. Up top, Colwill was in the right place at the right time to help open the scoring from which point Huddersfield never looked back.

Amine Bassi
On-loan attacker Bassi made five appearances for parent club Metz in Ligue 1 this season, with only one of his substitute appearances resulting in victory. At the bottom of the Championship, the Moroccan is proving to have a much bigger and brighter impact for struggling Barnsley. Few would have given the Tykes a chance against in-form Middlesbrough at 3pm on Saturday, but a Bassi masterclass – two finely taken goals and an assist – meant there could be light at the end of the tunnel yet.

Back-to-back Barnsley victories and a third in four games, all of which Bassi has played a part in, means he could prove to be just as important a temporary January addition as Daryl Dike this time last year. Poya Asbaghi’s side are now six points off safety with a game in hand on 21st-placed Reading and a slightly superior goal difference. For the first time in a long time, there is hope.

Danny Hylton
Scoring in back-to-back games is never to be sniffed at, particularly for a player completing that feat for the first time in nearly three years. Danny Hylton has been with the Hatters since the glory days of League Two and while he is a more peripheral figure for the Hatters these days, the veteran striker has shown he still has it with winning goals against Stoke and Derby this week. If the A50 has had enough of Hylton, Luton can’t get enough of winning. It is now five wins from six league games either side of that nonsensical 3-0 defeat to Birmingham.

A club with by far the lowest budget in the league to now be sat inside the top six makes Nathan Jones by far the best manager, pound-for-pound, the Championship has seen in years. Renowned for their policy of signing young players from the lower leagues, the only goal of Saturday’s game was from a strike force with a combined 68 years between them in the same week 34-year-old Robert Snodgrass signed for the club. Talk about having the best of both worlds.

Aleksandar Mitrovic
That’s 34 Championship goals for the season and counting. Mitrovic has already broken records and has more in his sight. Continue at this pace – that’s 12 in nine games – and the Serbian may set a record that will never be beaten.

Grant McCann
The stage was set. Grant McCann’s first game back in charge of Peterborough United was a relegation six-pointer against the club who sacked him just one month ago. Earning a Posh victory in his first game back in charge at London Road in a relegation six-pointer would have been the biggest statement of intent and a two-fingered salute at the outfit who dismissed him after winning his final two games in charge on Humberside.

Instead, Peterborough slummed their way to a defeat perhaps more dispiriting than any of the many suffered under their other oft-returning manager, McCann’s predecessor Darren Ferguson. Peterborough gave away each of the three goals to their visitors who took the gifts with well-executed grace, Keane Lewis-Potter’s double proving why he’s likely headed on a similar career trajectory to fellow City alum Jarred Bowen.

McCann’s reappointment was supposed to provide an instant boost to the Posh, and there will have been hope that this game would be won on a grudge more than tactics. Instead, being crushed 3-0 at home sent Peterborough bottom of the table for the first time this season. It’s not how it was supposed to start and the evidence thus far this season has shown that it is unlikely Peterborough have what it takes to lift themselves off rock bottom, never mind out of the bottom three.

Michael O’Neill
It all feels a little bit back to square one for Stoke City and much maligned manager Michael O’Neill. A promising campaign has stagnated over the winter and already the club are looking towards gearing up for next season with a spot in mid-table looking like both their ceiling and their basement this campaign.

One win in eight games since late January has seen Stoke not only drop multiple places in the second-tier table, but morale has taken a similar dip all around the bet365 Stadium. O’Neill is now rightly facing some of that ire with in-game management provoking constant criticism from the ST4 faithful. Mainstays of the promotion race through the first half of the season, 2021/22 has turned into yet another campaign with more bad than good. It should not be forgotten what a remarkable job O’Neill did in keeping the Potters in the division up until the summer of 2020, but the club has progressed nowhere near as much as it could and should have done since. Much of that onus is on the Coates family. But if the owners are the biggest problem at Stoke, O’Neill is looking less and less like the antidote.

Dark horse derby losers QPR
If you told QPR supporters at the start of February that that by the end of the month, they had taken a point apiece from games against high-flying Middlesbrough and a resurgent Hull alongside a hard fought home victory over an impressive Blackpool side, their supporters would believe it had a been a good month.

But just as is often the case with this QPR team, it has been the winnable games that have let down Mark Warburton’s side. Blackburn had not scored in over nine hours of football but Reda Khadra’s strike ended that drought and ensured QPR left Lancashire empty-handed and another disappointing February result joins those defeats to Millwall and Barnsley.

Reading’s bump back to earth
It was easy for all of us to get slightly carried away by Paul Ince’s return to management after nearly a decade away beginning with a victory. When Lucas Joao gave the Royals the lead at Blackpool, it looked as though Ince’s men could be on for a third win in a row. A couple of hours and four home goals later, that familiar sinking feeling was back.

Outthought, outfought and outplayed in the second half, Reading are once more looking nervously over their shoulder with each of the bottom three still believing they have what it takes to stay up – Barnsley are just six points away and one game better off than Reading.

Derby’s steam
Just as everything was looking like going their way for once, Derby suffered a third defeat in their last four Championship games which leaves the Rams eight points off the pace in the fight to stay up. Defeating Peterborough was crucial, but taking zero points from games against Millwall and Luton feels like playing a big part in potentially seeing Derby ply their trade in League One next season.

That they could even exist to do that is cause for celebration, but it is a shame that this team of fighters appears to finally be running out of steam. The next week looks crucial now; games against Cardiff and Barnsley should offer the chance of at least four points from six on offer. Any less and we are back to survival being a miracle.

Bristol City’s away form
Just as Bristol City sort of fixed their home form, their away results have taken a nosedive. No victory in 11 on the road and 33 goals conceded in that time, we are still getting more questions than answers from this Bristol City side, team, and club as a whole.