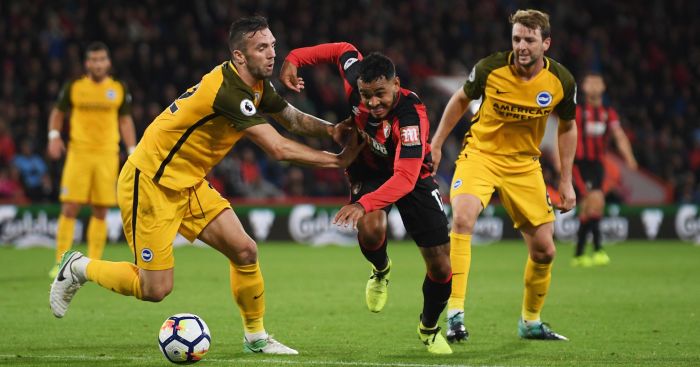 Norway manager Lars Lagerback believes Bournemouth forward Joshua King has the ability to play for a top-six side in the Premier League.

However, the likes of Tottenham and Everton have both been linked with the player in recent months and Lagerback believes the former Manchester United academy man has the ability to play for a Premier League giant.

“Yes, I think he has a fair chance to play in a top-six club,” Lagerback said.

“He has really good qualities, he’s physically strong, he’s very quick, both with and without the ball, and his finishing technique is really good.”

King, however, will miss Norway’s final World Cup qualifier against Northern Ireland due to a hamstring injury.

King scored twice in his country’s 8-0 win over San Marino on Thursday but came off around the hour-mark and has now confirmed he will not be risked for Sunday’s encounter with Northern Ireland in Oslo.

The 25-year-old has netted five times in these qualifiers, more than any other Norwegian or Northern Irish player, but Lars Lagerback’s side already know there is no chance of them qualifying.

“I felt my hamstring during the game (on Thursday) and in view of my history, we do not take any chances,” King told NFF TV.

“Myself, Lars and the medical team have discussed and agreed that I’m going home to get back (to fitness) as early as possible.”

Bournemouth face Tottenham at Wembley in seven days’ time and Eddie Howe will have been worried to hear last season’s top scorer King had ice on the problem area after the San Marino game.

Yet Lagerback believes King caught the problem early enough that he should be available for his club straight after the international break.

“The medical team said it was a minor injury so they thought it shouldn’t take more than four, five days,” the Swede added.

“He felt it very quickly and according to them they don’t think it’s anything serious.

“I don’t know if I should hang out our medical team but they said it was a minor injury. I’m not an expert but as they said I think there’s a good chance (of him playing against Tottenham) anyway.”