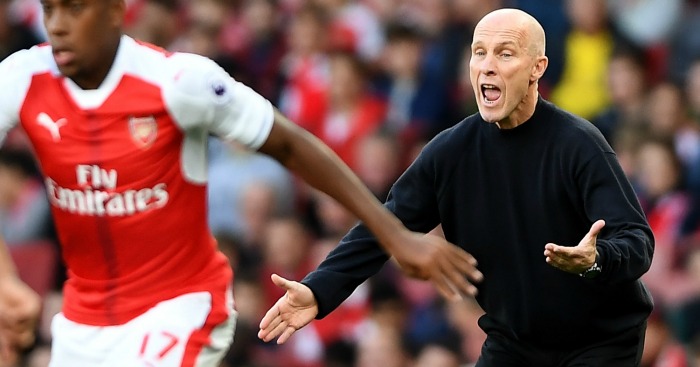 Swansea boss Bob Bradley will ditch the man in black look after Gary Lineker took him to task over his dress sense.

Bradley resembled the Milk Tray Man from the long-running TV advert on the Arsenal touchline last weekend as his first game in English football ended in a praiseworthy 3-2 defeat.

But Match of the Day host Lineker was unimpressed with the American’s attire, tweeting to his five million-plus followers: “Defeat for Bob Bradley in his first game in charge of Swansea. Lots of encouraging signs though….but an appalling jumper.”

Bradley, however, believes no-one will care what he wears should he save Swansea from the Premier League drop this season.

“I’ve looked from outside and I don’t know how it works at every Premier League club,” Bradley said ahead of his first home game against Watford on Saturday.

“But, from the day I arrived, I know how I work, what kind of person I am, I know what’s important.

“So if I’m going to come here and be myself, I’m not going to take the manual off the shelf about how to be a Premier League manager.

“I’ve already heard I’ve failed the dress test. My daughters told me they thought a pair of black slacks and a nice black sweater was fair enough, but obviously Gary Lineker didn’t.

“I thought a jumper was something a little girl wore to kindergarten!”

Former United States boss Bradley accepted Lineker’s criticism with a smile and admits that it has forced him into a fashion re-think.

Asked if he was going to change outfit for his Liberty Stadium bow, he said: “I’ve got to now, I cannot wear that again!

“Although if we win, no-one will care.”

On whether winning Swansea’s relegation battle was a case of substance over style, the tough New Jersey native said: “That is what it boils down to.

“You have to be a real guy, a real man. In all walks of life there are so many examples where people are more worried about how things come across or their status.

“I understand the Twitter game but you cannot be a guy who as part of a team or in a public setting will not stand up and say one thing.

“When push comes to shove you cannot find them. But on Twitter they act like the toughest guys in the world.

“That does not mean much if you have a lot to say when no-one is there and all you are doing is hitting 140 characters.

“What about doing it when it matters? If we are going to have a really good team and environment it counts more if you bring it every day when it is on you.”

Swansea slipped into the bottom three for the first time last weekend and have not won in the league since the opening day of the season.

And Swansea fans have to cast their minds back to May 1 to recall their last home victory.

“I would say to everyone at the Liberty on Saturday, ‘we absolutely need you’,” Bradley said.

“I’m not one to stand in front of the bench and (wave) the flag every time.

“I consider if we work the right way, understand what they are looking for and we get that part right it speaks for itself.

“But every now and again it’s good to remind the fans this is important.”