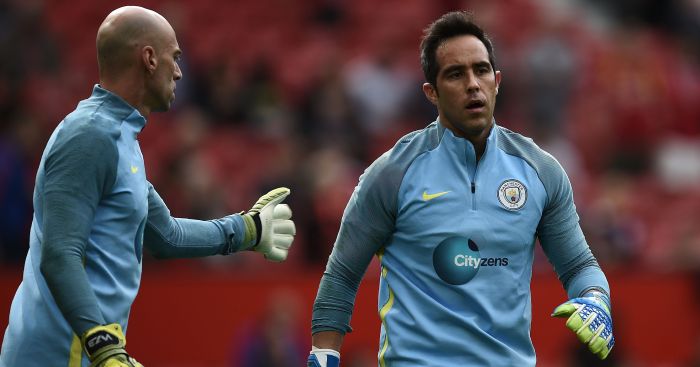 Willy Caballero says he has the support of Claudio Bravo after replacing the Chilean in the Manchester City goal.

Caballero started his third successive match in Sunday’s 2-1 home win over Swansea after being preferred to Bravo by manager Pep Guardiola.

Bravo, who was controversially and surprisingly signed to supplant England number one Joe Hart earlier this season, has made a limited impact at the Etihad Stadium.

Caballero said: “It’s not been an easy week for him but his behaviour is fantastic. He supports me and we are working really hard and he has a competitive mind, so he’s doing very well.

“Claudio is a fantastic player, a fantastic keeper and we have to respect him because he is probably the keeper with more titles in his country in the last two years.”

Caballero’s run in the side started with a convincing 3-0 win at Crystal Palace in the FA Cup and continued with last Wednesday’s 4-0 Premier League victory at West Ham.

The Argentinian and City did not have things all their own way in their latest outing, however, as they were forced to rely on a stoppage-time Gabriel Jesus winner to see off the battling Swans.

Jesus, the impressive 19-year-old Brazilian who joined the club last month, had continued his superb start at City by putting them ahead in the 11th minute having again been selected ahead of Sergio Aguero.

And it seemed other goals would follow as City completely dominated the first half, but they wasted numerous opportunities.

That allowed the relegation-threatened visitors to claw back into the game and Gylfi Sigurdsson netted an equaliser nine minutes from time. Aguero came off the bench but it was Jesus who had the final say, tapping in at the second attempt after Lukasz Fabianski saved his header.

Caballero, 35, said: “We put in our backpack a lot of weight when we conceded but, fortunately with Gabriel Jesus and the rest of the team, in the last 10 minutes we played with more intensity and I think that was the key.

“We played brilliantly in the first half but it wasn’t enough and we just scored one goal, but I think we played with a lot of luck because in a lot of games (we did not) – Middlesbrough, Everton at home when we dropped points.”

The victory lifted City to third in the table and back into the Champions League places. They return to action at Bournemouth next Monday and Caballero has been given no hint of whether he will remain in the side.

“I was always waiting for the cup but now I am ready for every single game. I will try to work really hard for the rest of the week but he always makes the decision for the team.”

Bravo’s superior footwork skills were the key factor in Guardiola’s decision to bring him in for Hart. Caballero admits he has had to work in that area too.

He said: “I feel that I have improved with my feet from the time the boss arrived here.”

The Welsh side remain one place above the relegation zone heading into next week’s clash with fallen champions Leicester.

Clement said: “Every game I have been involved in, we have tried to get the tactics right for the opposition and to try to get a positive result.

“That would have been a draw for this game, as I understand there are certain games we are not expected to win.

“But there are games we have to win. Southampton was one of those last week and now Leicester is a game we need to win.”