Home All The News Bravo’s season – and City career? – may be over 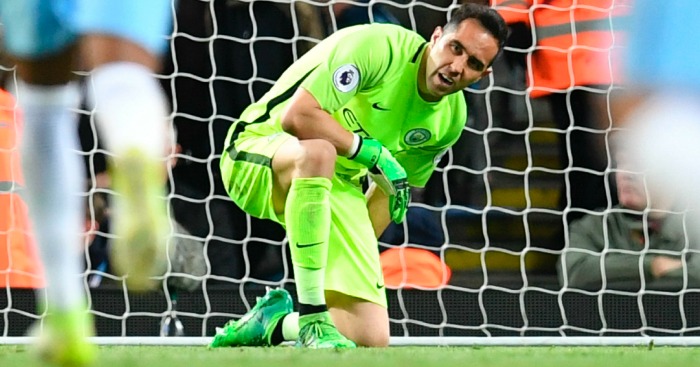 Pep Guardiola suspects Claudio Bravo’s season could be over after the Man City keeper sustained a calf injury in Thursday night’s derby.

Bravo was carried off, strapped to a stretcher surrounded by nine medical staff, with what appeared to be a calf injury after he caught a corner during the second half of the 0-0 draw at the Etihad.

The keeper, who has endured a difficult first season in the Premier League, will be assessed today, but Guardiola fears Bravo could miss the remainder of the campaign.

He said: “Tomorrow (Friday) we will know better. He has an injury, probably for some weeks. Seeing as though we are in the final stage of the season I don’t know if he will be available.”

“A stretcher for a calf strain? Please. Oh come on.

“He’d not done anything for 20, 25 minutes, he’d not been involved and then he’s leaped with his left leg for that catch from the last corner.

“He kicked the ball forward after that. Come on. I apologise if he hasn’t got a calf strain.”