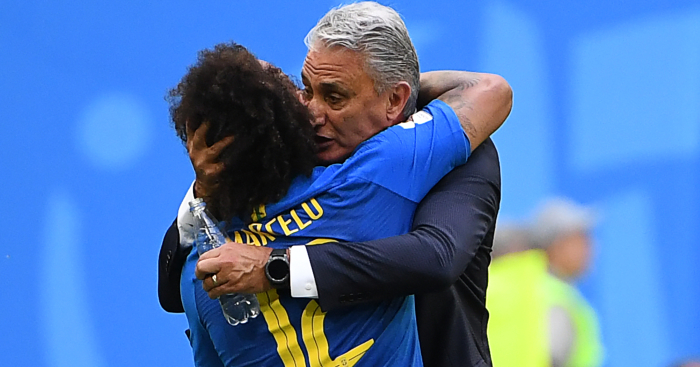 The competition’s most decorated nation were in danger of failing to win either of their first two games in Russia before Coutinho prodded in a stoppage-time opener and Neymar added a second in a 2-0 success.

Brazil had been thwarted on multiple occasions in the second period, with Gabriel Jesus hitting the crossbar and Keylor Navas saving from Neymar, who was once more centre stage when his successful penalty appeal was overturned upon review from the video assistant referee.

However, Coutinho’s finish banished the tension and frustration, and led to 57-year-old Tite tumbling onto the pitch during the celebrations among Brazil’s squad and coaches.

“It kind of pulled a muscle – it tore some fibres, I think,” he said in a post-match press conference.

“I’m limping during the celebration! Ederson and Cassio were there and I was like ‘whoa, I’m hurt’. I was going to celebrate with them but I had to limp back!”

Up until Brazil’s two late strikes, it looked like the most decisive moment had occurred just over 10 minutes from time when Neymar fell backwards to the ground after trying to cut across Costa Rica defender Giancarlo Gonzalez in the box.

At first, referee Bjorn Kuipers gave the spot-kick but the incident was looked at again by VAR and, though Gonzalez did grab at Neymar’s jersey as he slipped, the contact appeared minimal prior to the world’s most expensive footballer hitting the deck.

“If I was the referee I wouldn’t go back on my decision but I respect that because it’s subject to interpretation,” Tite added.

“We don’t need referees to win the game. We just want it to be fair. To me, it was a penalty. Brazil doesn’t need any help.”