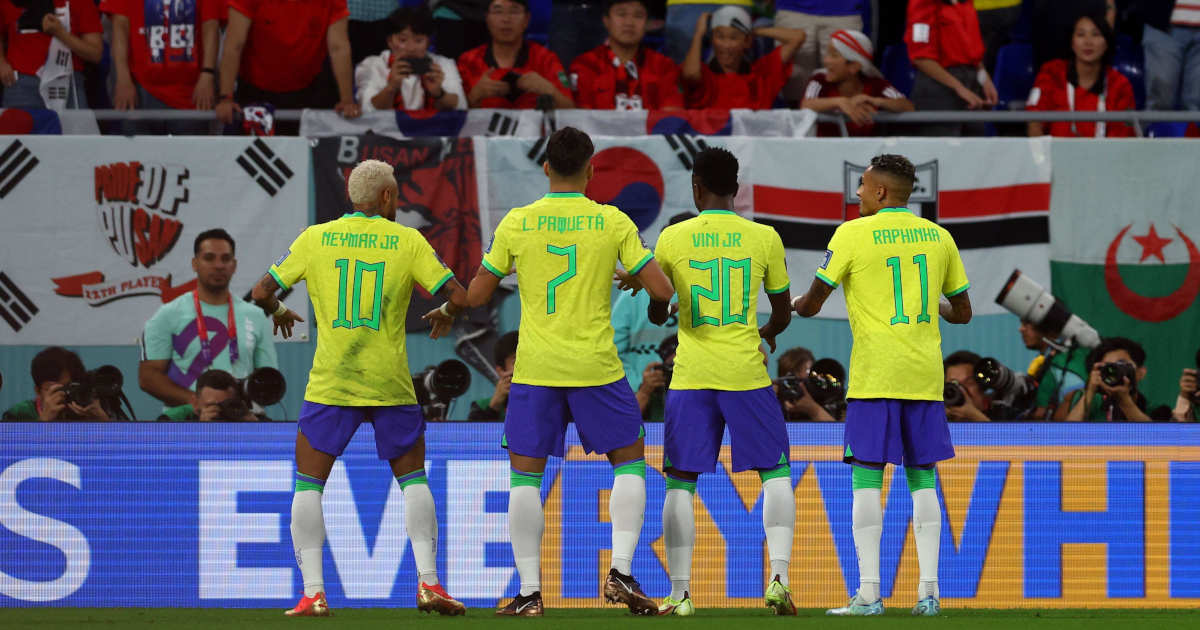 Roy Keane’s irritation at Brazil dancing caused an angry reaction in their media, and the upshot is a bunch of old men shouting at each other about respect.

If part of the appeal of the World Cup is its ability to reconnect us to our inner ten-year-old, then we can only wonder what ten-year-old Roy Keane might have been like. The most surprising aspect of his half-time rant during the game between Brazil and South Korea on the subject of Brazilian dancing after each goal was the revelation that he watches Strictly Come Dancing. You’d have thought his interests might lie elsewhere; One Man and His Dog, perhaps, or a documentary on the history of punching walls.

There has been an explosion in the diversity in the faces of football on television in Britain, but there remains a a place for curmudgeonly old men. Roy Keane is only 51 years old, but that beard alone would make him an honorary member, even if it weren’t for his occasional diatribes against a modern world that he clearly doesn’t – and just as significantly doesn’t want to – understand. When he gets together with Graeme Souness, football’s equivalent to Statler and Waldorf are present and correct.

Regular watchers of Premier League football will already be fully aware of Keane’s idiosyncratic views, but those of us who do watch regularly can easily forget just how small a minority we are. For a large number of people, the finals of a major tournament is the only time they see much of Keane other than viral clips on social media, when he’s briefly released from the vice-like grip of pay TV and allowed to roam the free-to-airwaves of ITV. We’re used to this. A lot of people aren’t.

Keane’s comments have sparked a near-inevitable response in the Brazilian media, with Botafogo coach Luis Castro telling the broadcaster Globo that, “Roy Keane doesn’t understand the culture of Brazilian football. He doesn’t understand the Brazilian team. So, he speaks in an inelegant way due to what happened today.” And if the Daily Mail is to be believed, when asked about it in the post-match press conference, Brazilian head coach Tite said, “There are people who are evil who will say that was disrespectful.”

Of course, it isn’t for Roy Keane, Tite or anybody else in the British or Brazilian media to decide whether this was disrespectful. The only people who can answer that question – if it should even really be asked at all – are the South Koreans themselves, but their opinions on the matter don’t seem to have been asked, and if they were, the voices of the media both in this country and in Brazil have drowned theirs out. What we’re left with is a bunch of old men shouting over each other about ‘respect’ in increasingly intemperate terms until the next manufactured controversy comes along and distracts us all again.

On Talksport, meanwhile, Jason Cundy was also getting in something of a lather about it all, and hearing his explanations when pressed on the matter was revealing. In short, he didn’t really have any.

First it was because their first goal came after only seven minutes had been played. Then it was because one of the goals was a penalty. Eventually, he alighted on a rationale he could stick with. It was because of something to do with Tite, either because the players ran 50 yards to get involved with the Brazil head coach, or because he joined in, or something. By this point in the conversation it was difficult to make out what Cundy was saying because the noise of his own floundering was drowning him out.

And that’s kind of the problem with all these 50-plus angry men, isn’t it? They’re full of rage, and while that rage usually has a clearly defined target, the moment you push back against their spluttering outrage you find that there isn’t much substance behind it at all. What’s wrong with dancing, Jason? Why shouldn’t the manager get involved? Do you really think that they should wait until they’ve won the tournament before they engage in anything beyond a brisk handshake (no eye contact)? Celebrating goals in a way that confuses the feelings of older generations has been going on for more than half a century, but I guess we all become our fathers in the end.

Because where do you draw the line over ‘respect’? Were England being ‘disrespectful’ by scoring six against Iran? Is it disrespectful towards towards Brazil to fail to take into account their football culture? Should all games be a certain shade of grey, the colour drained from them because of some – clearly far from universal – cultural form of respect? And should people from Britain or Ireland be lecturing Brazilians on disrespecting South Korea in the first place? Do we need a set of guidelines?

None of this is really a matter of respect; it’s a matter of being a bit lame. Roy Keane huffing and puffing through a half-time break about the way in which Brazil players celebrate scoring goals is a bit lame. Dragging the head coach of the team into it all at a press conference is a bit lame. Calling anybody who questions whether you’re being disrespectful ‘evil’ – whether they’re right or wrong, that really isn’t the point – is a bit lame. And the one common thread between all of those involved in this that they’re all old men.

Roy Keane’s curmudgeonliness – which it remains difficult to believe is not at least partly playing up for the cameras – is welcome on our screens for so long as we’re not expected to take it seriously. Because that’s the key thing about Keane as a broadcaster; he is excellent at it. He’s often insightful, his bluntless can be invigorating in a media landscape that sometimes watches sits Ps and Qs too closely, and even when he’s off on his latest Oscar the Grouch routine, at least he’s usually entertaining.

He’s the elderly uncle propped up in an armchair on Christmas Day, squinting at Top of the Pops after a cherry brandy too many, paper hat at a jaunty angle on the side of his head, complaining that all these young ‘uns look the same nowadays.

All that the rest of us wide-eyed ten-year-olds can do really is raise our eyebrows knowingly in the knowledge that he’s probably never going to change now, anyway, but in the meantime – with a week and a half of the 2022 World Cup still to play – let’s just hope that he hasn’t caused an international incident by Christmas.