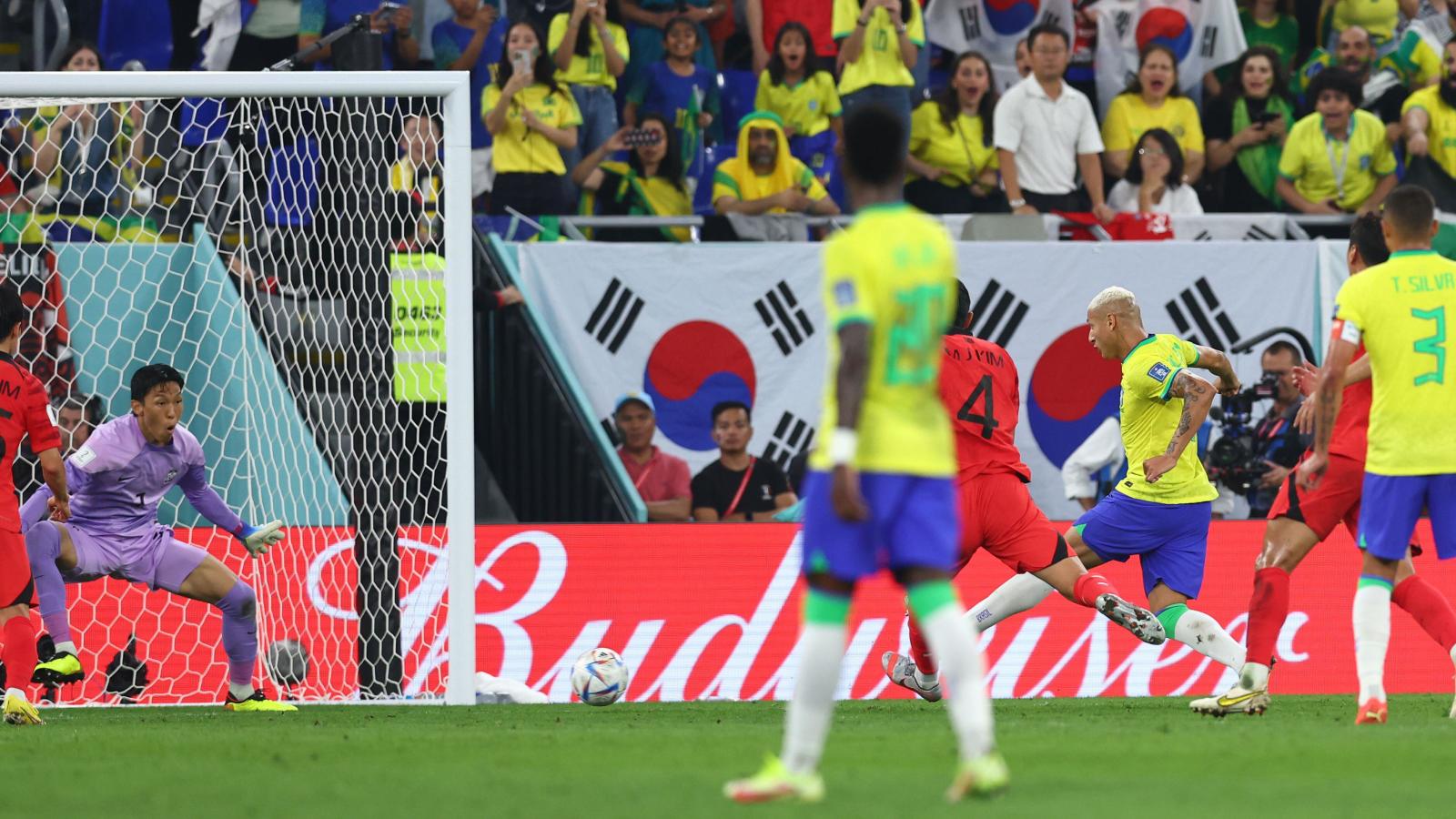 Brazil’s first-half masterclass swept South Korea aside and set up a quarter-final with the old men of Croatia.

There were two big talking points in the end. Was Richarlison’s goal tonight better than that other brilliant goal he scored? And would Roy Keane and Graeme Souness find Brazil bringing on their third-choice goalkeeper more or less disrespectful than celebrating goals with a little dance?

We had to occupy ourselves with such frippery because other, more valid questions had long since been answered. “Are Brazil better than South Korea?” for instance, was settled within 13 minutes. Likewise “Are Brazil proper favourites for this World Cup?” and “Is Neymar really back to anything like proper fitness, though?”

The 36 minutes in which Brazil danced and dazzled their way to a 4-0 lead that thoroughly settled this last-16 clash were the most compelling spell of attacking football produced by anyone at this tournament so far, and that includes anything we’ve seen from Kylian Mbappe and his mates, or Spain, or (heaven help us) England.

It was an astonishing blitzkrieg to start the game and while it must be noted that South Korea were bafflingly complicit in their own downfall having bravely if entirely stupidly decided to engage Brazil in a toe-to-toe scrap, what the World Cup favourites produced was mesmerising.

By the time Richarlison produced the crowning moment of the evening it was already 2-0, Vinicius Jr taking a composing touch before curling the opener and Neymar converting a penalty via the medium of dance.

Brazil’s third goal, though, was the truly special one. The one that will join the pantheon of great Brazilian World Cup goals. That it came from a move instigated by and finished by Richarlison via Brazil’s two centre-backs only made it so much better.

It began with Richarlison combining showboating and muscle to bring the ball under his spell with a series of headed keepy-uppies that we only hope no Nottingham Forest supporters were unfortunate enough to witness knowing how these things can upset them. From there the Spurs man found Marquinhos whose cutback was dummied by Richarlison and found Thiago Silva, whose pass back for Richarlison was immaculate. The finish was also immaculate, and inevitable.

Then, just as everyone was getting their head round the idea of a fringe Spurs player having scored the World Cup’s two best goals, we all had to come to terms with the sight of West Ham’s Lucas Paqueta sidefooting a brilliant volley into the bottom corner to make it four. Glorious nonsense it was.

Neymar’s return had prompted Brazil to go all out, positioning him in the hole behind a brilliant front three of Vinicius, Richarlison and Raphinha. All of them were exceptional and ripped Korea to shreds. Raphinha didn’t make it to the scoresheet but did everything else short of it.

After the emotional highs of South Korea’s improbable last-gasp qualification for the knockout stages, they were finished almost before they’d begun. Their methods were perplexing, but it’s hard to see how anyone would have lived with Brazil’s first-half attacking play.

Certainly you’d imagine Croatia will give it a better crack in the quarter-final, but they are an old and weary football team. They could hardly live with Japan in the first half of their clash and Brazil will likely try again for a swift kill.

The second half was a non-event, which suits Brazil just fine. They’d already been able to rest their first XI for the final group game against Cameroon and spent half of this one spinning on their cocks. Croatia, meanwhile, had to fight to the very last minute to confirm their last-16 place and then to the very last second to confirm their quarter-final place. They have looked knackered throughout this tournament and things are about to get real tough for them.

Brazil weren’t ever perfect at the back, though. The consolation they conceded is neither here nor there – a long-range smash  that took a deflection and can happen to anyone at any time. But Alisson had already been called into significant action before and after that goal. Their centre-backs may have crafted the most exquisite team goal imaginable but they didn’t entirely convince at the day jobs. It makes this Brazil team an intoxicating prospect. From everything we’ve seen they should absolutely reach the final at the very least but you can still see how it might go spectacularly wrong at an unexpected moment. You can’t ask for more than that from Brazil, really.

This facile win continues this tournament’s annoying habit of being, on the field at least, everything you could want. We’ve had lots of shocks and drama yet the last eight looks set to be big beasts only unless something untoward happens to Spain or Portugal tomorrow. The first half here was certainly the one that gave the clearest sense of having watched the winners in action.

And to answer the big questions: tonight’s goal, and the little dances apparently.