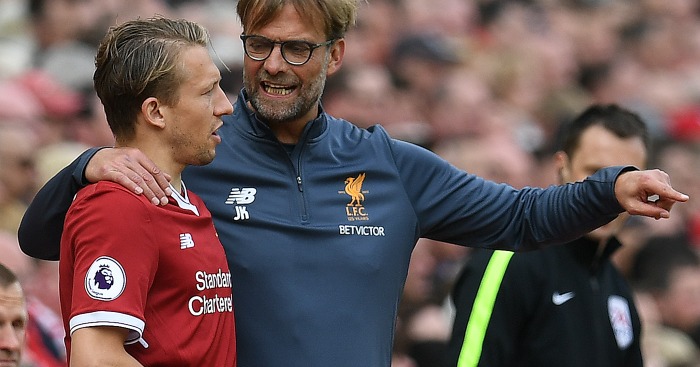 Lucas Leiva may be on his way out of Liverpool this summer as Brazilian side Gremio confirmed their interest.

The midfielder looks likely to leave Anfield and a return to Porto Alegre looks possible – 10 years after he first arrived on Merseyside.

While Newcastle and Brighton both have an interest in signing Lucas, the player will no doubt have been alerted by quotes from Gremio football vice-president Odorico Roman, who confirmed that the club were interested in bringing the player home.

“Lucas is a great player, signing him would make an impact,” he told Zero Hora.

“If there is a possibility within the financial conditions of the club, and that also serves Lucas’ interest, it is possible that he may come.

“At this time, there is no negotiations. I talked to him a few days ago, at any moment we can make contact. But he is also aware of the interest of other clubs.

“There is, yes, possibility of him coming, but there is nothing in progress right now.”

Lucas is currently in Brazil following the conclusion of the 2016/17 campaign, attending Roberto Firmino‘s wedding in Maceio on Wednesday.

At 31, Lucas knows he could earn more money by staying in the Premier League, and earlier this month he discussed the prospect of returning home.

“There was an offer from Gremio in January but I wanted to complete 10 years at Liverpool,” he explained.

“Now in the window we had a conversation, but nothing official. I do not hide my desire to return to Gremio, but there are several factors.”