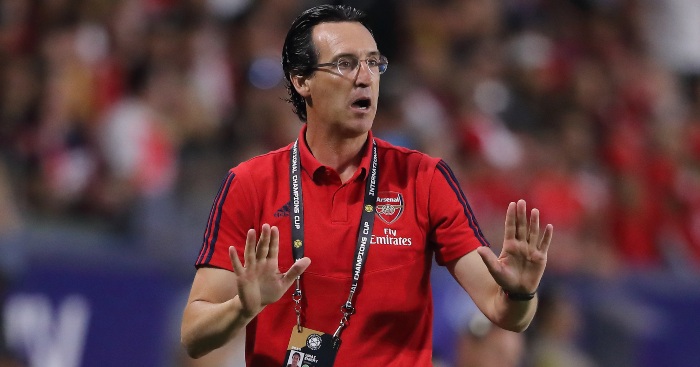 Into something good…
The great joy of pre-season is optimism. Albeit adjusted for a cynical world, in which we cackle at its hopelessness six months later.

To the Manchester Evening News, then, and Samuel Luckhurst’s bold proclamation of a new signing that will revolutionise Manchester United.

The player in question is, of course, Harry Maguire and that’s rather a sign of the times and an indication of how bleak the landscape is at Old Trafford. It seems like Ole Gunnar Solskjaer’s optimism has infected the water supply, though.

‘The subtle changes to the United defence are the most critical as part of the new attacking approach. United want to supplement Lindelof with another centre-back who emerges from the backline in Harry Maguire, who enchanted the Manchester City coach Pep Guardiola with his second-half forage at the Etihad in May.’

It’s a strange sort of argument, hinging on the faux-revelation that centre-halves can no longer be stoppers.

‘Bruce and Pallister, Stam and Johnsen (though they started only 24 times in three seasons, they only lost the 1998 Charity Shield) and Ferdinand and Vidic all raised the bar at United but the game is becoming quicker and going long from a goal kick is seen as sacrilegious.’

Very true, but hasn’t that been the case for over a decade now? In fact, is there a single player left at any of the current top-six clubs who could be described in those arcane terms? Van Dijk, David Luiz, Stones, Otamendi, Alderweireld, Vertonghen… whomever is starting for Arsenal these days… Rudiger, Gomez.

These are all footballers. Moreover, every centre-half that United have bought in recent seasons has been intended to play in the same way. They haven’t succeeded in doing so, but that’s a different issue. Marcos Rojo is a part-time full-back, Bailly and Lindelof can certainly play, and even Jones and Smalling were once upon a time (a long time ago now, admittedly) celebrated for their technical abilities.

Maguire is a good player, a progressive defender too, but is signing a £90m defender who conforms to all the prerequisites of the age really a subtle tweak?

Arsenal might not win the league
‘Gun to pot’ shouts The Sun. Actually, Mediawatch quite likes that bit.

What’s the old rule? If the opposite would be of greater surprise, then it’s not really a story. That doesn’t trouble Mark Irwin, who ploughs on regardless, reporting that ‘Unai Emery has thrown in the towel on Arsenal’s title challenge’ – to which, of course, everyone responds ‘what title challenge?’

‘The Gunners boss says the gap to champions Manchester City and runners-up Liverpool is too big to close.’

When that gap is 28 points and when a head-coach has less than £50m with which to improve his squad, then that’s probably a rather smart thing to say. When your captain is AWOL and your defence is still partly reliant on Shkrodan Mustafi, it’s doubly so.

In fact, had Emery said differently – had he fired the cannons, called Guardiola a fraud, and declared Arsenal to be a dark horse – wouldn’t we all be having our fun at his expense by now?

Mi Nombre Es Gareth
The Sun have also hung Alison Bender out to dry. ‘Gareth Bale’s failure to learn Spanish means his 13 trophies count for nothing at Real Madrid – if only he’d asked Woodgate for advice.’

It’s the hottest of hot takes and we were fascinated to find out how winning four European Cups could be rendered so insignificant. Alas, it’s nothing of the sort. There are some good points made – it’s hard to avoid the conclusion that Bale should have learnt some conversational Spanish by now – but it’s really just a set of anecdotes from 2005, when Alison was working for Real Madrid’s in-house TV channel.

‘During my time at Real Madrid I tried (to learn Spanish), and boy did I try, but as an extrovert I found it extremely difficult not being able to express myself and so I retreated. I remember getting a little stick from Iker Casillas who clearly felt disrespected by my lack of engagement with the players, but it wasn’t for lack of effort.’

‘I learned the hard way the importance of it at that club. It is one of the most valuable currencies at Real Madrid, even more value it seems than being a great player.’

All true, we’re sure. But… but… but… can we stop dressing this up as more than it is? Like the spoilt child of European football they are, Real Madrid overpaid Bale a few years ago and offered him a contract they no longer want to honour. Yes, Jonathan Barnett has been complicit in helping to create the current impasse – he really does come across like a thundering tw*t – but this is a situation originally architected by the club’s culture.

Interestingly, Bale’s lack of Spanish only seems to have become relevant since Real’s form flatlined, their squad needed urgent reinvestment, and his injury issues began to hamper his performance.

REDACTED
And Amitai Whitehouse has his say on Bale’s potential move to China in The Mail, employing the usual barrage of pejorative clichés.

Asia is different to Europe, you see, and any player moving there is guilty of all kinds of professional sins. Which is an interesting line to take given the climate within the football media and the current spate of departures to THE PLACE WE MUST NOT MENTION. It’s almost as if being offered much more money for the same, or less work is an appealing scenario which most people, irrespective of their profession, would react positively to.

Least surprising soundbite of the day

‘If he achieves Brexit I’ll have great admiration for the man.’

‘I may even vote Conservative if he delivers Brexit.’

Recommended reading of the day
Aaron Flanagan on The Gay Footballer