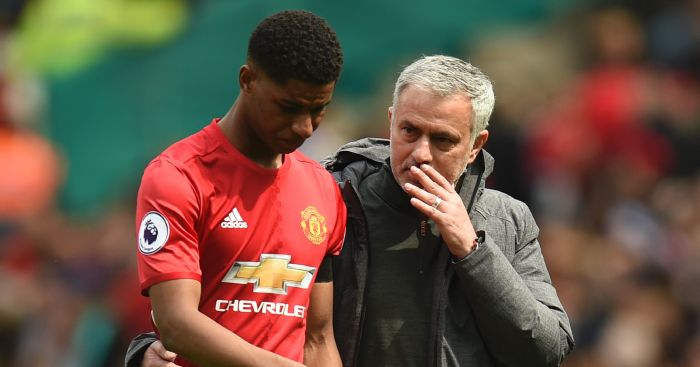 Snap back to reality
Mediawatch has absolutely no idea what Marcus Rashford has done to Neil Ashton, but it must have been something quite terrible. Last April, the man with ‘the inside track on football’s big stories’ for The Sun told us that Jose Mourinho was ‘determined to do something about’ the spending habits of Rashford and Jesse Lingard. As he wrote of the former at the time:

‘Last month he splashed out £14,500 on a Rolex Santos wristwatch for his mother Melanie’s birthday.’

Fast forward 12 months, and those ‘fast cars and showy houses’ are again on the agenda. ‘Marcus needs reality check,’ reads the sub-headline, as Ashton cracks his knuckles and looks for his hatchet.

‘He has the house, the cars, the £10,000 Cane Corso guard dog that cost Rashford £30,000 to train up, plus unlimited pairs of Balenciaga shoes and clothing in the wardrobe.’

Who has the obsession with Balenciaga again?

‘The Nike photoshoots, the private jets, the personal indulgences, such as the fast cars and showy houses, are rewards for high-performance.

‘Instead, Rashford is in danger of losing touch with reality.’

Really? He takes part in photoshoots, rides on private jets – presumably put on by those who want him for photoshoots – and is ‘indulging’ himself by having cars and a house. Whatever next? Clothes? Don’t get us started when he starts wearing sunglasses in the summer.

‘Manchester United’s striker got the full Nike superstar treatment when they whisked him to London in a private jet for a photoshoot.

‘They dunked the kid in gold paint, dangling a pair of their latest boots around his neck as part of another extravagant advertising campaign to promote their glamorous range.

‘This is not Cristiano Ronaldo, who scored in his 11th successive Champions League match with Real Madrid’s last-minute penalty against Juventus at the Bernabeu on Wednesday.’

And there you were thinking a 20-year-old yet to finish his second full season as a professional footballer was actually one of the best to have ever played the game. Silly you.

‘This has been a disjointed season for Rashford, falling further down the pecking order following the arrival of Alexis Sanchez from Arsenal in the January transfer window.

‘Rashford’s two classy goals in the 2-1 victory over Liverpool last month distorts the story of his season.

‘Six games, for club and country, have come and gone since then.

‘He is a fixture on the substitutes’ bench again, getting some minutes here and there against Brighton (15), Swansea (15) and Manchester City (eight).

‘There are no gifts as a United player.

‘Every appearance is earned, every minute on the pitch is the reward for hard work, professionalism and dedication to the red shirt.

‘Rashford is finding all that out. He has scored just 13 times this season: 12 for United and once in an England shirt.

‘It is a modest return.’

Romelu Lukaku (26) and Jesse Lingard (13) are the only players to score more goals for United in all competitions than Rashford (12) this season, this despite eight players playing more minutes. ‘Six games, for club and country, have come and gone’ since those Liverpool strikes, but he has started only two and completed 90 minutes in just one: against Sevilla, where he assisted the consolation goal.

If 13 goals (it’s actually 14, and 11 assists) is ‘a modest return’ for a player who has started 27 games, you might be setting the bar a little too high. After all, this is not Cristiano Ronaldo.

The Temptations
Besides, Ashton would be well-served to remember Rashford was enjoying ‘another electrifying start to the season’, ‘is flying’, and was in the midst of what was ‘already shaping up to be another good year’ in October.

Back then, the forward was described as ‘too smart, too streetwise, too level-headed’ to go down the wrong path. He was ‘trying to lead a quiet life, spending the afternoons in the Trafford Centre with his girlfriend or meeting his pals for peri-peri chicken in Nando’s.’ He had ‘his feet on the floor’, and was not about to suffer the ‘pitfalls’ and ‘temptations’ of the modern footballer.

Indeed, Ashton really ought to remember all of that. It was he who wrote it just six months ago.

Watch me, watch me
Jordan Davies was given the unenviable task of conducting a ‘WILSHERE AND WELBECK WATCH’ for The Sun from Arsenal’s draw with CSKA Moscow. The pair are judged on ‘goal threat’, ‘link-up play’ and ‘fitness’, before a final ‘World Cup verdict’ is issued.

‘Midfielder Wilshere still has the X factor Southgate requires in that central midfield role. Welbeck may have been a favourite of Roy Hodgson but he does not do enough with the ball in attacking positions.’

He did score, to be fair.

How’d I get so faded?
Says Paul Merson of Manchester City:

‘Pep Guardiola sides have faded in the last few years. At Bayern Munich he lost in the semi-finals of the Champions League and with Man City last season they had a bad run towards the end.’

They won their last four games of last season, and lost just four times from January 1 to May 21, winning 16 of 27 games. ‘Faded’ indeed.

Magic
There is something of a common theme running through Merson’s Sky Sports predictions. See if you can spot it.

‘Southampton had a great chance to beat Arsenal last weekend after taking the lead but if they don’t win this game then they probably need to win two or three of their last five, which is too much.’

‘If Southampton and Stoke don’t win this weekend then they need to win half of their remaining matches to catch Huddersfield; I can’t see that happening.’

To clarify: Southampton and Stoke won’t win half of their remaining matches.

Clatt’s life
Michael Oliver ensured his place in the footballing limelight this week, albeit unintentionally. His decision to award Real Madrid a penalty against Juventus, as well as the call to dismiss Gianluigi Buffon, were both correct by the letter of the law. Plenty disagreed, suggesting sentiment and the occasion should have been taken into consideration, but the decisions were just.

The referee has an ally in The Times on Friday. Mark Clattenburg is here to tell us why Oliver ‘is being put under too much pressure’. The article includes the following paragraph:

‘People says referees want to put themselves in the spotlight but that is the last thing he will have been thinking about.’

Indeed. Some referees might have entered the match with a “gameplan”. Or changed their mind because they got scared by Roy Keane.

Recommended reading of the day
Adam Bate on Kyle Walker.