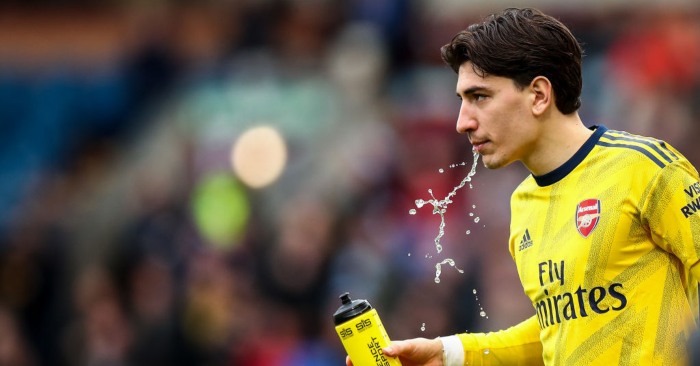 This is going to blow your mind. Footballers are going to be expected to make some slight changes…

Move closer…
Every day Mediawatch is astounded by the revelations about football’s return, which are treated like utterly outlandish concepts by football journalists. First came all the very bizarre fuss about footballers washing their own training kits and now we have arrived at a Daily Telegraph exclusive that tells us ‘spitting, swapping shirts after matches, sharing water bottles and even team celebrations are expected to be banned in new Premier League protocols’.

So as news reports speculate that the general population could be urged to socially distance for the next 12 months, who expected football to carry merrily along – with players spitting in the general direction of others, swapping clothing, sharing water bottles and hugging each other with abandon that we can no longer call ‘gay’?

It’s the ‘even’ that is most astounding. How can anybody expect footballers to play football without jumping on each other’s backs or pretending to shine each other’s shoes?

BLOCKheads
Martin Lipton has led the way with coronavirus-related ‘exclusives’ in The Sun but Mediawatch has to raise a hand to question that tag being used on his story claiming that ‘THE FA have the power to BLOCK any Premier League plans to axe relegation from the top flight’.

Now, as we have previously discussed, there are no Premier League plans to axe relegation from the top flight; that’s the suggestion of six relegation-threatened clubs that is considered so ‘fanciful’ that it was not actually discussed at the Premier League meeting last Friday.

Oh and we also already knew that the FA have the power to block (sorry, BLOCK) any such plans – that do not actually exist – because The Independent told us so…

‘The first issue is the fact that any change to promotion or relegation has to be agreed with the Football Association and EFL.’

Where one leads…
‘FA ‘can BLOCK any attempt by Premier League to axe relegation’ when season resumes after coronavirus lockdown’ – Daily Mail.

The Premier League are not making any sort of ‘attempt’ to stop relegation. You know it and we know it.

If your very second paragraph notes that ‘the game’s governing body is not expected to have to use its ‘special share’, incorporated the year before the Premier League was launched in 1992 – although it is an option’ then you know it is bollocks.

We expected rather better of the Telegraph’s Chief Football Writer. If you’re going to pander to such nonsense, at least write in BLOCK capitals.

Coulda woulda shoulda
Opening paragraph in The Sun: ‘MANCHESTER CITY could face two huge fixtures on the same weekend if they reach the FA Cup final.’

Fifth paragraph in The Sun: ‘So the FA Cup final might be moved to a midweek date.’

It’s all about the money, money…
We’re not saying it’s all a massive sh*t-show but The Sun online’s headline football story on this glorious Thursday is a list of the top ten highest-earning Instagram stars in the Premier League, based entirely on guesswork from a casino promotion and review site that is promoting The Sun’s own online casino.

Rocket fuel
The desire for Manchester United transfer gossip is so damned strong. Which leads to headlines like this on the Mirror website:

Odd that there is literally no mention of their Chief Football Writer’s claim on the back page of the actual newspaper that ‘MANCHESTER UNITED might wait another 12 months before signing their No. 1. transfer target Jadon Sancho’.

But why have sourced stories that take into account a changing football landscape when a man can ‘fuel Man Utd transfer speculation’ with a remark during a YouTube chat in which he never actually mentions Manchester United?

Seven wonders
But why talk about one signing when you can talk about ‘Seven Man Utd stars could be sold by Ole Gunnar Solskjaer in next transfer window’ (Daily Star).

Why seven? Why not 10 or 12 or 16? If you are going to write a list of players who ‘could’ be sold and sell it like a news story with some actual insight, then why the hell stop at seven?

Yes, a massive thanks is due to Mourinho for bringing in the two coaches who have helped take United to *checks notes* fifth with a points total that would have seen them usually cast adrift in seventh.

Price of admission
Over at the Express website, it’s all business as usual with ‘admissions’ running at roughly ten a penny. This is their biggest football story at 11am on Thursday:

And what is this ‘honest admission’? That he cannot honestly tell him not to leave, obviously. But he would honestly like him not to leave because he loves Arsenal. And that, ladies and gentlemen, is NEWS.