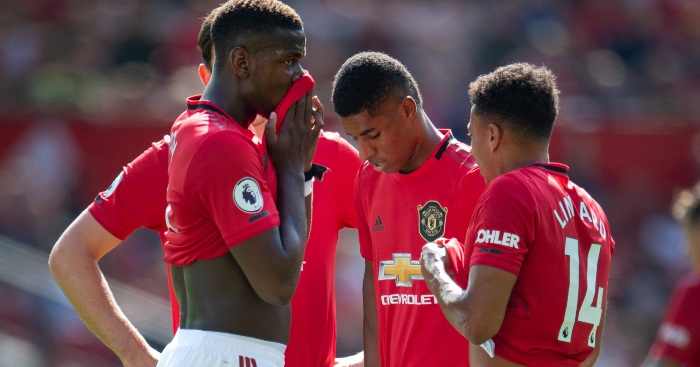 A Bridge not far enough
It’s the most-read ‘football’ story on The Sun website on Monday morning as England prepare to play Bulgaria on Monday night.

Is it an England story by Dan King or Charlie Wyett, both in Sofia and both reporting at length on issues like England’s defence, James Maddison’s naughtiness and Harry Kane’s heroic captaincy in Monday’s newspaper?

‘John Terry buys £4.35million mansion just yards away from Wayne Bridge after ‘seducing’ his ex in 2010’

It has everything you need from a ‘football’ story. It has two ex-footballers, it has a property purchase and it has nine-year-old alleged sex talk. And it has the phrase ‘just yards’ and then ‘just a few minutes walk’ to describe two properties which are hundreds of yards and several fields apart.

And when we reach the tenth paragraph we find a new revelation:

Ignoring the most bizarre of non-sequiturs, it turns out that this ‘news’ is not even news; Terry and Bridge have already managed to survive just months of living relatively close to each other.

The late, late show
Over to MailOnline now and there is no pretence at 11am on Monday morning – nine hours before England’s latest game – that anybody is in the slightest bit interested in England, despite the Mail sending three of their football writers to Sofia to cover it. How very special they must feel as they log onto their newspaper’s website to find their thousands of words pushed down the football homepage, with no mention of England in the first seven articles.

Obviously the top story is a manager-by-manager rundown of the Premier League:

‘Klopp has Liverpool firing, Hodgson and Dyche are defying the odds while Solskjaer, Pochettino and Silva face battles to save their jobs… Here’s how EVERY Premier League manager is doing’

So far, so filler. And then:

And that will be Spanish football gossip from Saturday. Because Liverpool. And because Manchester United.

But then comes the real shamelessness…

‘Manchester United have racked up the highest wage bill in Premier League history at £332m, as salary spend continues to grow despite their WORST start to a season for 30 years’

And this is ‘news’? Mediawatch is absolutely certain that Manchester United released their latest financial results on September 24, which is pretty much three weeks ago. Maybe we are missing something because obviously the Mail would not be pretending this is news just to create negative Manchester United content in a traditionally quiet week, would they?

‘Despite making their worst start to a season in 30 years, Manchester United’s on-field problems have made no impact on their wage bill after the club published their latest financial results.’

‘The Premier League giants have racked up a staggering spend on player salaries, the highest ever reported by an English side.

‘Financial documents revealed on Monday show the club’s incredible £332million yearly wage bill is an all-time high that has grown by £100m – 43 per cent – in the past three years.’

Which Monday? September 24 was a Tuesday. Now we are really confused.

‘The figures come by way of Swiss Ramble, a financial blogger on Twitter, with United the first Premier League club to publish their numbers for 2018-19.’

The figures came by way of Swiss Ramble on September 30. Which was at least a Monday. Just not this Monday.

Manchester United are the first Premier League club to publish 2018/19 financial results, covering a disappointing season when they finished sixth in the league and were eliminated in the Champions League quarter-finals by Barcelona. Some thoughts in the following thread #MUFC

And the excellent Swiss Ramble is not in the business of revealing numbers, merely interpreting them.

Over your shoulder…
On closer inspection, it becomes clear that MailOnline’s James Dutton is really just guilty of abject laziness rather than deliberate obfuscation.

For what James Dutton has done is spotted a piece by the Mirror’s Matt Maltby – published on Sunday – and (barely) re-written it, without any care at all that the news is almost three weeks old and the interpretation dates to September 30.

Maltby writes: ‘While Manchester United’s performance on the pitch is on the decline, the struggling club’s latest financial results have revealed that their wage bill isn’t. In fact, the Premier League giants – currently enduring their worst start to a league campaign in 30 years – have racked up a staggering wage list that is the highest ever reported by an English top-flight side.’

Dutton writes: ‘Despite making their worst start to a season in 30 years, Manchester United’s on-field problems have made no impact on their wage bill after the club published their latest financial results. The Premier League giants have racked up a staggering spend on player salaries, the highest ever reported by an English side.’

Maltby writes: ‘The eye-watering £332million yearly wage bill is an all-time high in English football and has grown by an incredible £100m (43 per cent) in the last three years alone.’

Dutton writes: ‘Financial documents revealed on Monday show the club’s incredible £332million yearly wage bill is an all-time high that has grown by £100m – 43 per cent – in the past three years.’

Maltby writes: ‘The figures have been released by Swiss Ramble, a respected financial blogger, after United became the first Premier League club to publish 2018/19 financial results.’

Dutton writes: ‘The figures come by way of Swiss Ramble, a financial blogger on Twitter, with United the first Premier League club to publish their numbers for 2018-19.’

Dutton writes: ‘The wage bill shot up £36m from £296m to £332m in recent months, largely due to the club’s outlay on improving the first team squad.’

Who says he doesn’t change anything? This time he took out a (correct) hyphen!

So Mediawatch will leave you to decide whose crime is worse: Maltby for pretending that three-week-old financial results is news? Or Dutton for shamelessly cribbing his work?

And when you see a crowd I see a flock…
James Dutton at least has the defence that he was not alone, with several outlets seeing the Mirror’s late, late story and producing an even later version of their own:

‘Man Utd have the highest wage bill ever reported by Premier League club despite struggles under Solskjaer’ – The Sun.

‘Manchester United’s wage bill is the highest ever reported by a Premier League club’ – Give Me Sport.

‘Some say they’re in a ‘relegation battle’. But Manchester United have the highest wage bill in Premier League history’ – Fox Sports.

Because this is 2019 and the entire editorial policy of some websites is ‘if they’re doing it, so will we’, whatever the quality or the worth of the ‘it’.

Propaganda time
From the Manchester Evening News: ‘The alternative Premier League table that should give Manchester United hope ahead of Liverpool FC clash’.

Ignore the evidence of your own eyes and the actual Premier League table, Manchester United fans; look at this xG table that tells you that United really should have scored those two penalties.

‘WAYNE Rooney spent Saturday night being handed drinks by a thong-clad waitress in a Washington club.

‘The former England captain was spotted nodding at the blonde server as he watched patrons dance at Living Room DC.’

Nodding? Lowering and raising his head slightly and briefly, especially in greeting, assent, or understanding, or to give someone a signal? The dirty, dirty b***ard.

Back to the back five
Stan Collymore has an idea. Unfortunately it’s not a new idea…

‘In Bulgaria ­on Monday, I would like to see Gareth Southgate revert to a system with three centre-backs, one he practised when he first took over.

‘Bulgaria showed us at Wembley that they are not a good side, but we need to get used to the playing the system for when we take on stronger opponents.’

Newsflash: We tried that exact plan in 2018; how did that one pan out, fella?

Daniel Storey on Wales with the handbrake on