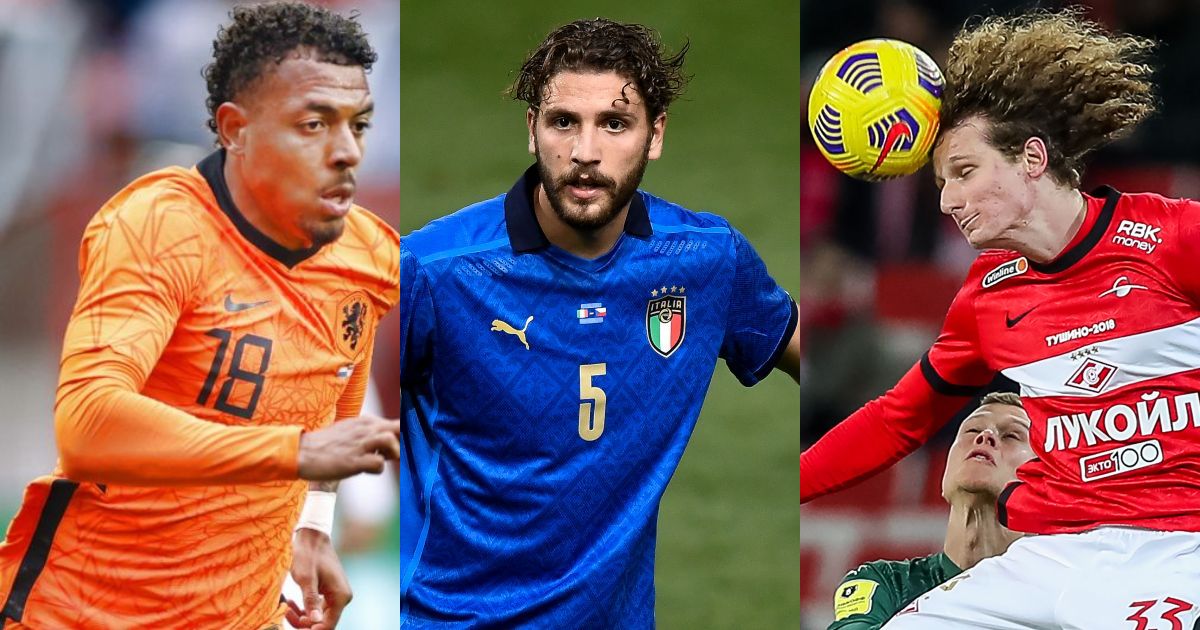 ITALY: Manuel Locatelli (23)
Ten caps and yet to be beaten in an Italy shirt. Seven starts and won every single one in an Italy shirt. And yet he was sold by AC Milan two years ago for little more than £12m. Sassuolo will get rather more (Manchester City are one club said to be interested) when they inevitably sell him this summer after a tournament at the heart of this stubborn Italy side.

SWITZERLAND: Ruben Vargas (22)
It’s hard to break into this settled Swiss side but Vargas – a rapid, right-footed left-winger – has a decent chance after another progressive season for Augsburg. Switzerland have young defenders in this squad – Jordan Lotomba, Eray Comert and Becir Omeragic – but they are likely to fall back on the old guard when Euro 2020 comes around.

TURKEY: Halil Dervisoglu (21)
Technically a Premier League striker as he spent last season on loan from Brentford to Galatasaray, where he basically did bugger all until scoring three goals in the last four games of the season to earn an unlikely call-up. He then scored on his Turkey debut. You might know his name (but still not be able to spell it) by the end of June.

WALES: Ruben Colwill (19)
“He just blew us all away with how he was and how he conducted himself,” said Wales caretaker boss Robert Page after picking a teenager with barely three hours of Championship football under his belt. Colwill offers something different to Daniel James, David Brooks and Harry Wilson because he can play off either flank and through the middle.

BELGIUM: Jeremy Doku (19)
Belgium have had the same squad for about seven years so the only player to actually fit the criteria is Rennes winger Doku, who staked his claim by scoring one and making two goals against Belarus in March. He was again excellent against Greece last week, with Roberto Martinez saying: “It seems Jeremy Doku had exactly the same impact he had in March.”

DENMARK: Mikkel Damsgaard (20)
Adapted pretty seamlessly to Italian football with his first season at Sampdoria and now the winger – most comfortable on the left but can play across the park – has now made the next step to international football, claiming two goals and three assists in three games for Denmark. Leeds and West Ham have been linked and we expect that list to grow over the summer.

One to watch: Mikkel Damsgaard

Hard working and intense winger who’s very good 1v1, can cause trouble for any defensive line. Doubt he’ll start but will be the perfect impact sub. pic.twitter.com/Ru1J52YE5v

FINLAND: Onni Valakari (20)
The only Finnish international born in Motherwell, Valakari scored 12 goals in the Cypriot league last season as well as a debut screamer for Finland against France. Provides a creative spark and attacking finesse to a side largely lacking in such frivolities.

RUSSIA: Maksim Mukhin (19)
Barely anybody outside of Mukhin’s own family had heard of him this time last year, but a raft of Lokomotiv Moscow injuries catapulted him into their line-up at the back end of the season. A raft of Russia national injuries and unavailable Under-21 players then catapulted him into his national squad and now he has two caps as a defensive midfielder, and a five-year contract with CSKA Moscow already signed.

AUSTRIA: Christoph Baumgartner (21)
You might remember the name from Manchester United gossip columns but after a stellar season for Hoffenheim, he has committed to the German club. The big time can wait. He only made his Austria debut in September but has now started nine games in pretty much every position across the front four. A genuinely exciting talent.

Christoph Baumgartner to have a break out tournament @EURO2020

NETHERLANDS: Donyell Malen (22)
A striker who spent two years at Arsenal, Malen is going to Euro 2020 on the back of a 27-goal season for PSV that pretty much guarantees him a move this summer. Liverpool are one of his most consistently named suitors. Not a nailed-on starter for the Dutch – Wout Weghorst and Memphis Depay are ahead of him – but Malen can do serious damage off the bench with his pace.

NORTH MACEDONIA: Milan Ristovski (23)
Five goals in nine games in the Slovak league earned Ristovski his call-up and then a goal on his debut against Kazakhstan confirmed that it was the right choice. Let’s face it, every single North Macedonia player could be a breakout star this summer because we haven’t a bloody clue. His brother already has 65 caps so he has some catching up to do.

UKRAINE: Ilya Zabarnyi (18)
Played 36 games for Dynamo Kiev as a centre-back at the age of just 18 last season after a raft of injuries and never looked fazed. He now has seven caps and started a 1-0 win over Northern Ireland last week. He has already been strongly linked with Chelsea after being recommended by Andriy Shevchenko.

CROATIA: Joško Gvardiol (19)
Nicknamed Pep because his surname is almost but not quite Guardiola, there is something of a clamour in Croatia for him to start against England on Sunday, even after just 45 minutes of his international career. Gvardiol will play for RB Leipzig next season after choosing the German club over Leeds United; they might have themselves a £17m bargain.

CZECH REPUBLIC: Alex Kral (23)
Great hair. Which is he best place to start. Being Czech he has been heavily linked with a move to West Ham after a brilliant season for Spartak Moscow in Russia. He is basically a Czech Declan Rice – a defensive midfielder with technical ability who can also play at centre-half. With much, much better hair.

ENGLAND: Phil Foden (21)
Seven players fit the criteria and three of them have just played in a Champions League final. So when we say ‘breakout’ here, we only mean that the rest of Europe really will sit up, take notice and Google ‘Stockport’.

SCOTLAND: Billy Gilmour (19)
A Champions League winner at just 19, Steve Clarke now has some serious decisions to make about the combative midfielder. He did more in half an hour against Luxembourg than any other player in 90 minutes. Come the end of June, Chelsea might have a list of potential loan clubs as long as his legs.

POLAND: Kacper Kozlowski (17)
Became the youngest player to pull on the Poland shirt in almost 60 years when he came off the bench to face Andorra in March. He then added a second cap last week against Russia. He will not be playing for Polish side Pogon for too much longer, with Juventus and Manchester United among many clubs linked. “Ever since I was a young boy, my idol has been Cristiano Ronaldo. However, over time, I started to like and watch Paul Pogba more,” he said recently.

SLOVAKIA: Tomas Suslov (19)
Heavily linked with a move to Ajax, Suslov – an attacking midfielder who can play on either flank – is not likely to be at Groningen for much longer. He is three games into his international Slovakian career but is already seen as the natural heir to Marek Hamsik. No pressure, fella.

SPAIN: Ferran Torres (21)
Since moving to Manchester City for just £20m last summer, Torres has been eased into the Premier League, starting 15 games. He is very much a secondary option for City, failing to get off the bench in either cup final this season. But for Spain, Torres has been a revelation, starting eight games this season alone and claiming six goals, including a hat-trick against Germany. At 40/1, he might be worth a Golden Boot tickle.

SWEDEN: Dejan Kulusevski (21)
One of the few bright spots to appear in a poor, poor season for Juventus – he was instrumental in their Coppa Italia win – Kulusevski has the opportunity to emerge from the pretty significant shadows of Zlatan Ibrahimovic this summer. He needs to deliver rather more goal threat than his one goal in 13 appearances suggests, mind.

FRANCE: Jules Kounde (22)
The only Frenchman who matches the criteria, which is a shame because it’s hard to see the £50m -rated Sevilla centre-half playing too much football this summer, with Presnel Kimpembe and Raphael Varane pretty established in the centre of the French defence. They have what can only be deemed ridiculous strength in depth, while England are desperately trying not to play Tyrone Mings.

GERMANY: Kai Havertz (21)
He has literally just scored the goal that won Chelsea the Champions League so Germany really do have a right to expect great things from Havertz. Certainly, they should expect far greater things than his last performance for Germany in a 2-1 defeat to North Macedonia which suggested that this German side could trip up at the group stage. It’s your time, Kai.

HUNGARY: Andras Schafer (22)
Not a lot of goals in this Hungary squad so Schafer scoring from central midfield to beat Cyprus on his first start will have been very welcome indeed to coach Marco Rossi. Schafer plays in Slovakia – largely as a defensive midfielder – so we’re not expecting too many more strikes at Euro 2020.

PORTUGAL: Pedro Goncalves (22)
He joined Sporting Lisbon for just £5.85m and promptly scored 23 league goals from the wing as they won the Portuguese title, and yet people were surprised when he was called up by Portugal last week. He made his debut from the bench against Spain on Friday and it is telling that he replaced Joao Felix and was far, far better than the younger, far more expensive man.

If people at United are smart they would sell Pogba if he asks for big salary and get Pedro Goncalves as a replacement.

Pedro Goncalves has a €60m release clause. We shouldn’t buy grealish who would cost upward of £100m.#MUFCTransfer #Transfers pic.twitter.com/2pPLsv1jnT