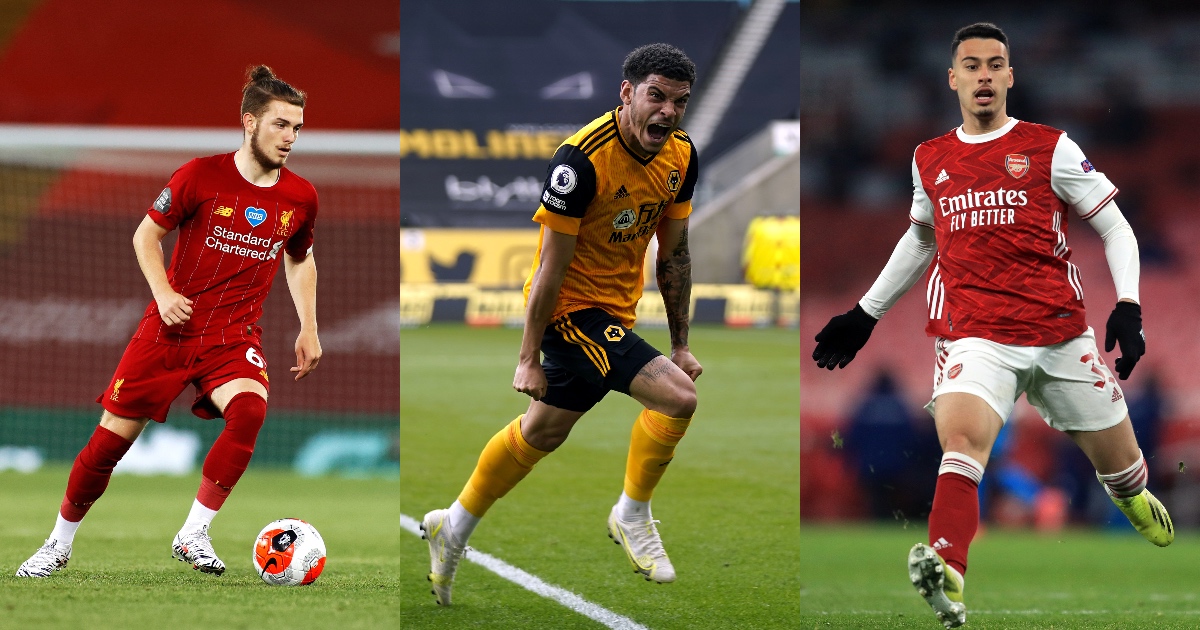 We reckon these guys have a chance of breaking into the first team this season. Only one rule: must have started no more than ten league games last season (unless they were plying their trade elsewhere, in which case anything goes).

They may take the places of some of this lot.

Arsenal – Gabriel Martinelli (7 Premier League starts in 20/21)
Martinelli made more Premier League starts for Arsenal last season than the season before (6), but it failed to sate the hungry fans. Like methadone to a skag addict, the Gunners faithful became increasingly impatient for their next hit of the Brazilian after his energetic performances in 2019/20 had them immediately addicted.

When asked why Martinelli wasn’t getting game time last season, Arteta said: “We cannot put six or seven young kids out there.” You can if they’re good enough, Mikel.

Aston Villa – Jacob Ramsey (6 starts)
Emiliano Buendia will likely be Aston Villa’s main attacking midfielder this season, but Dean Smith’s reticence to allow Jacob Ramsey to leave on loan suggests he will get his chances. The 20-year-old started six games for the Villans last term and featured in 22 games in total. “He’s one for the future,” says Smith; that future could be now. Things are looking up at Villa.

Brentford – Mads Rasmussen (10 Championship starts)
Rasmussen joined Brentford in the summer of 2019 and had to bide his time to surpass compatriot Henrik Dalsgaard in the pecking order at Griffin Park. The 22-year-old did just that at the end of last season, starting the last nine games of the campaign and the play-off final, in which he provided a quite brilliant assist for Emiliano Marcondes. Dalsgaard helped FC Midtjylland knock Celtic out of the Champions League in the most predictable event of pre-season on Wednesday after a return to his homeland, meaning Rasmussen’s place at right-back is secure.

Brentford double their lead in the play-off final in style…😎pic.twitter.com/isP0KL3ANW

Brighton – Jakub Moder (7 starts)
“He’s been adapting to a new club, adapting to a new team, a new league, a new country, so he’s done all of that really well,” Graham Potter said of Moder back in April. The 22-year-old was excellent in Poland’s 1-1 draw with Spain at Euro 2020 too.

Burnley – Nathan Collins (17 Championship starts for Stoke)
A centre-back called Nathan Collins signing from Stoke City is about as ‘Sean Dyche’s Burnley’ a transfer as it’s possible to be. “I went to go past him and he blocked me off and his forearm connected with my face,” Stoke under-23 manager Wade Elliott recalls after one of Collins’ first training sessions. It won’t be easy to break the James Tarkowski, Ben Mee bedrock, but a forearm smash could do it.

Chelsea – Callum Hudson-Odoi (10 starts)
Hudson-Odoi went very quickly from top of the Thomas Tuchel gold stars chart to the naughty step last season. He started four of Tuchel’s first five games in charge, before being subbed as a substitute against Southampton as his “attitude” wasn’t up to scratch. After a proper pre-season, the dos and don’ts will be clearer and with other members of the squad returning late, a fast start could see Hudson-Odoi stake a claim for a regular starting spot.

Crystal Palace – Jean-Philippe Mateta (2 starts)
Christian Benteke scored more Premier League goals while Mateta has been at Crystal Palace than in the preceding three seasons combined. No-one predicted the Belgian would revert to being a striker that actually scores goals and Mateta – six months into an 18-month loan deal – will be hoping that form is temporary.

Everton – Jean-Philippe Gbamin (0 starts)
“He’s one of the players that can be, I don’t want to say a ‘revelation’ for us, but he can be an important player if he continues his progression in the way that he’s doing.” Rafael Benitez is excited by the prospect of Everton finally seeing what Gbamin is capable of. The poor b*stard played just 11 minutes on his return from an Achilles tendon rupture before suffering a knee injury that kept him out for the rest of last season.

Leeds – Ian Poveda (0 starts)
Poveda left Manchester City due to a lack of opportunity. The outstanding form of Raphinha and Jack Harrison blocked Poveda from a place on the Leeds wing and when asked whether the 21-year-old could be used as a No.10, Marcelo Bielsa replied: “No.” Okay then. But the Argentine boss has said he continues to be impressed by Poveda’s development.

Leicester – Patson Daka (21 Bundesliga starts for RB Salzburg)
Daka has scored 51 league goals in two seasons for RB Salzburg – not a bad replacement for Erling Haaland. But Leicester’s £27million signing will have a battle on his hands to displace Jamie Vardy and the revitalised Kelechi Iheanacho. That squad is looking tastier and tastier.

Liverpool – Harvey Elliott (31 Championship starts for Blackburn)
“Most of these players were not in the same place like Harvey is in that age,” Jurgen Klopp said when asked about young players absorbing tips form senior players. The German boss reckons Elliott is more advanced than his contemporaries and has “made a big step” towards playing a significant part for Liverpool this season.

Manchester City – Nathan Ake (9 starts)
There’s not much scope for breakthrough talent at Manchester City. And, in truth, even a £40million centre-back is going to struggle to prise apart the partnership of John Stones and Ruben Dias.

Manchester United – Anthony Elanga (2 starts)
“If you ask him [Elanga] at half-time to run over to the cricket ground and get us a drink, he’d do it. That’s the type of lad he is.” As well as a water boy, Elanga is also a very fine footballer. The arrival of Jadon Sancho has done him no favours in terms of game time, but uncertainty over Marcus Rashford’s fitness may hand him early opportunities to impress.

Newcastle – Ryan Fraser (9 starts)
Having forced an exit from Bournemouth, Fraser had very little impact on Newcastle last season through a combination of injury and, frankly, being a bit rubbish.

Norwich – Adam Idah (1 Championship start)
Idah started the same number of Championship games last season as in the Premier League the season before. There’s no shame in playing second fiddle to Teemu Pukki, but the Finland international struggled to maintain a fine start to life in the top flight last time around and Idah will be waiting for missteps.

Southampton – Mohammed Salisu (8 starts)
Salisu was seen as quite the coup when he arrived at St Mary’s last summer. But he had to wait until February for his first Southampton start, with Ralph Hasenhuttl claiming he’s “one for the future”. He struggled to displace Jan Bednarek and Jannik Verstergaard, but it’s not entirely clear just how bad the defence needs to be for Salisu to get a game – only West Brom conceded more than the Saints’ 68. The 22-year-old will hope the customary nine-goal drubbing comes early.

Tottenham – Joe Rodon (8 starts)
Rodon was excellent for Wales at Euro 2020 and he will be hoping the departure of Spurs great Toby Alderweireld opens up a spot in the first team. Even if Fabio Paratici gets his way and lands someone – seemingly anyone – from Serie A to play in defence, Rodon will will fancy his chances of being ahead of Davinson Sanchez and Eric Dier in the pecking order.

When a block’s as good as a goal. Superb.
pic.twitter.com/qOBJGBFQ3e

Watford – Maurizio Pochettino (0 Championship starts)
Turns out a Pochettino will be plying his trade in the Premier League this season. Not the Pochettino, but his son will do. Maurizio left Spurs 14 months after Mauricio and made his Watford debut at the very end of last season.

West Ham – Ben Johnson (5 starts)
Johnson will struggle to displace one of the standout players of Euro 2020 in his favoured position, but he impressed with his versatility last season, playing as a left wing-back. And Johnson fancies himself as what must now be known as a Leonardo Spinazzola. “A lot of people say about the comfort of the position and maybe that it is unnatural but I think it does suit a right-footer nowadays given that it is wing-back.”

Wolves – Morgan Gibbs-White (4 Premier League starts; 4 Championship starts for Swansea)
Gibbs-White was hugely impressive in his debut Premier League season in 2018/19, but has struggled for fitness and opportunity since. Nuno Espirito Santo gave him his chance but a new manager could be exactly what the enigmatic midfielder needs for a true breakout campaign.