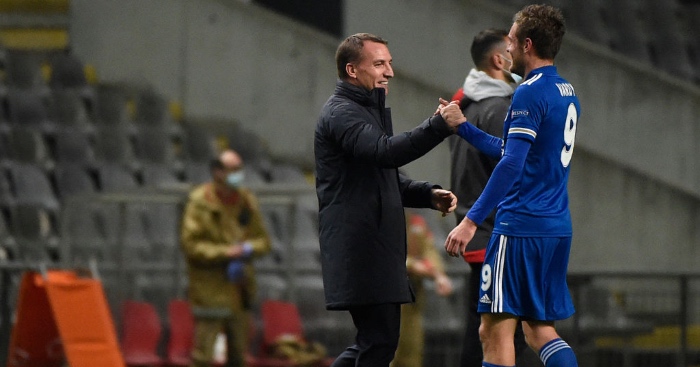 Leicester manager Brendan Rodgers has praised ‘highly gifted’ substitutes Jamie Vardy and James Maddison after they helped Leicester to qualify for the Europa League round of 32 with a 3-3 draw against Braga.

The Foxes went behind in just the 4th-minute as Al Musrati scored from outside the box. Harvey Barnes equalised five minutes later before Paulinho scored a second for Braga.

Luke Thomas scored his first goal for Leicester in the 78th-minute to bring the English side level.

Despite his effort, they found themselves behind for a third time as Fransergio Barbosa scored late in the game.

Jamie Vardy* stepped up in the 95th-minute, scoring from a Marc Albrighton cross to level things up and send Leicester through to the round of 32.

Speaking after the late drama, Rodgers told reporters: “It’s great to qualify, confirming qualification is obviously great for us. That was the objective at the beginning and now the next ambition is to go on and win the group, so that’s what we’ll look to achieve.

“With so many games coming up at least we now know we can manage the squad and maybe give players a rest, but we are still hungry.”

Rodgers brought on Maddison and Vardy just after the hour mark to improve their attack.

Speaking about the subs, he said: “Our plan was to play the system we were in, and if we had to chase the game we would change the shape to 3-1-4-2 and those players would change the dynamic of the game. They are highly gifted players and they made a big difference.

“In the first half we were too slow in our movement, too static and we weren’t aggressive enough. In the second half, we were outstanding. We changed our system, as we had talked about before the game.

“Youri (Tielemans) came on and dictated the tempo of the game. In the second half we were excellent with the ball and Youri and James (Maddison) were the catalysts for that.”

*Buy Jamie Vardy and thousands of other players on Football Index. 18+, UK and Ireland customers only, begambleaware.org. T&Cs apply.