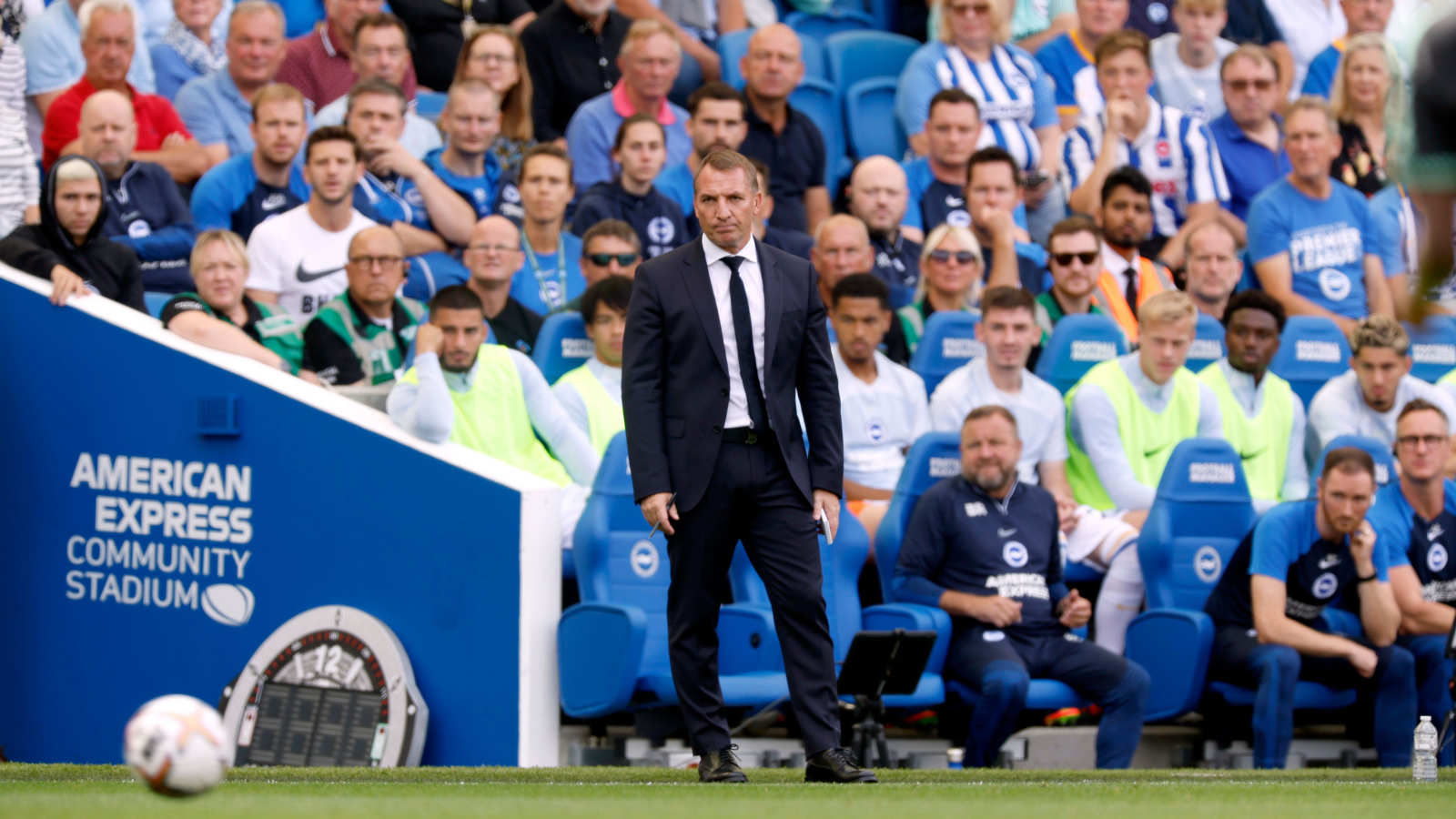 A fifth straight defeat has left Leicester City rooted to the bottom of the Premier League, and Brendan Rodgers’ position is now under threat.

Whichever way you slice it, this has been a pretty disastrous start to the season for Leicester City. With just a single solitary point and 16 goals conceded in their opening six matches, they sit rooted to the bottom of the Premier League, already three points adrift of the rest.

The silver linings have been gossamer thin. They didn’t lose all their valuable assets by the end of the summer transfer window; Youri Tielemans and James Maddison remain Leicester players. And three of their five defeats have come against ‘Big Six’ opposition: Arsenal, Chelsea and Manchester United.

But the modern-day Premier League isn’t very strong on this sort of nuance, and shipping five goals at Brighton has now only increased the pressure on manager Brendan Rodgers, who is now the clear favourite to be the second top-flight manager to lose his job this season.

The impression of unravelling looks unexpected from the outside. After all, Leicester finished last season riding the crest of a mini-wave, with three wins from their last four games during which they scored 13 goals. But the club’s disastrous summer in the transfer market has come to look like a canary in the coalmine for what has followed on the pitch.

Against Brighton, the problems looked all too familiar. Kelechi Iheanacho had given Leicester the lead inside a minute, and even after falling behind, Leicester managed to peg an effervescent Brighton side back to level terms well before half-time.

But Leicester’s defensive performance in the second half reverted back to their underwhelming early season type. The Wesley Fofana-shaped hole in their defence was filled by Wilfried Ndidi, but Ndidi’s performance only made the arrival of Fofana’s replacement, Wout Faes, seem all the more urgent, capped off by conceding the penalty kick to put Brighton 4-2 up and the game once and for all beyond the Foxes.

And the weakness to the start of the season was probably best summarised by the Leicester fansite The Fosse Way, whose piece on the Brighton game started with a summary of the variety of pickles in which the team has already found itself this season: ‘We’ve been 2-0 up and failed to win, we’ve been 1-0 up and lost, we’ve played against ten men and lost, now we’ve scored after 52 seconds and lost as well.’

Perhaps it’s not so surprising that Leicester are having defensive issues this season. The loss of Fofana leaves a big hole, but they also lost Kasper Schmeichel during the summer, and while some might argue that Schmeichel was past his best by the time he left for Nice, it takes no little defensive reorganisation to replace a goalkeeper who’s been in position for the previous 11 years.

In the transfer market this summer, Leicester were hit by a perfect storm. On the one hand, there were – and likely still are – players who wanted to leave the club. But on the other, there are a number of ageing players on big contracts who the club might have wanted to offload but whose wages wouldn’t be matched elsewhere. A lack of new arrivals makes the squad look as unbalanced as might have been feared, even if there is still clearly plenty of talent among their players.

It seems reasonable to say that this situation isn’t entirely Rodgers’ fault. Leicester are one of 19 clubs playing in European competition who only managed to fulfil UEFA’s FFP requirements due to the application of ‘COVID-19 emergency measures and/or because they benefited from historical positive break-even results’, and have been placed on a watch-list as a result.

And the club’s current financial situation isn’t great. Leicester have lost £120m over the last three years and have total debts of £276m. Last season’s annual accounts are due in the next few weeks, and few expect those to paint a rosier picture of the club’s current circumstances.

This belt-tightening during the summer was necessary, but it has taken a club that had started to become accustomed to finishing in the top half of the Premier League to the cusp of a relegation battle which some fear they may able ill-equipped to fight. Arguments between players on the pitch at Brighton didn’t help with the perception that this is a deeply unhappy team.

This will have to factor into the club’s immediate decision-making. Rodgers signed a contract extension at the end of 2019 which still has three years to run, and that was signed against a backdrop of speculation that Arsenal might have been about to replace Mikel Arteta with him. Getting that commitment wasn’t cheap – though rumours that he is the second-highest paid manager in the Premier League after Pep Guardiola appear way off the mark – and this makes offloading him now less than straightforward.

Because there is a dread scenario here. What happens, should Leicester sack Rodgers and hire an expensive replacement who can’t get a tune out of this squad either? Relegation from the Premier League with the previous manager’s salary to pay and his replacement’s too would be another financial strain on a club that can ill-afford any more of those.

It certainly seems that Rodgers’ goodwill among the fanbase had a very limited lifespan. His time at the club has been been successful. Under him, Leicester have finished in fifth place twice and eighth once, won the FA Cup and the Community Shield.

But this season has looked confused with tactical and line-up changes which hint at a manager who’s not quite sure of what this season’s team even looks like, and that is clearly not a strong look when we’re six matches into the new season and he’s lost the last five in a row.

Sacking and replacing a manager is always a gamble. Things can usually get worse, and it can hardly be said that Brendan Rodgers is a manager of little experience, ability or knowledge. And if there is a collective sickness among their players, whether this would dissipate under a new manager does remain open to question.

It’s worth bearing in mind that all three of last season’s relegated Premier League clubs changed manager – Watford did so twice – to little effect. Sacking the manager is far from the silver bullet for a club’s ills that some believe it to be and once it’s done, it’s done, with only the prospect of even more upheaval – and costs – should it not work out.

Mauricio Pochettino is the current favourite to replace him, but this does seem a little on the optimistic side, considering his profile and likely wage demands. The second favourite is Sean Dyche, who may be closer to their budget and who has the additional advantage of having been elbow deep in this sort of Premier League relegation battle several times before. But this has to be weighed against his sacking by Burnley last season, with relegation being a financial downturn that the club really can’t afford.

Even if Leicester’s owners hold their nerve against the current turning of the tide, Rodgers’ next three games are critical. They have a home match against Aston Villa and an away match against Tottenham before the international break, and while it may be a stretch to expect them to take much from a trip to Spurs, that Villa match, coming against a team which has had a fairly torrid start to the season itself, is starting to look like one that Leicester must win if the manager is still to be in his job the end of September. And even their home Carabao Cup match against Newport County now takes on significance that it might not otherwise have done at this early stage of the season.

And the biggest problem that Brendan Rodgers faces is that his squad of players is quite clearly not the weakest in the division. Leicester haven’t stopped scoring goals, which may be considered a by-product of the talent at his disposal. But they have been conceding a lot – only Bournemouth have conceded more, and they managed half of theirs in one match – and that level of defensive disorganisation is best explained as an issue with him. It may just be that Rodgers has at most two games to save his position at The King Power Stadium.