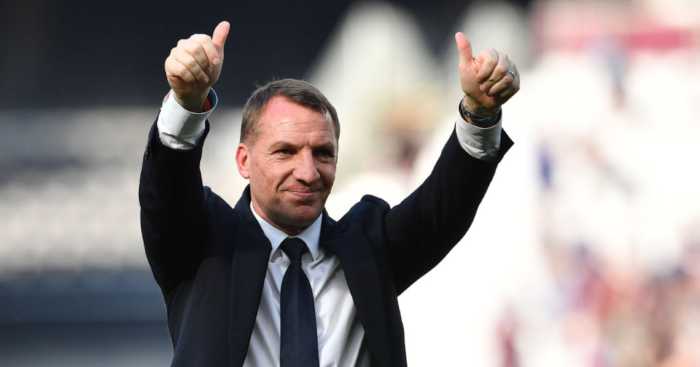 Brendan Rodgers has committed his long-term future to Leicester with the signing of a new five-and-a-half-year deal.

Rodgers, quizzed heavily about a possible move to Arsenal over the last week, has taken City to second in the table since joining from Celtic earlier in the year.

But his future is now clearly at the King Power Stadium.

“When I made the decision to come to Leicester City, it was because I was excited about the direction the club was taking and how I could apply my experience to the journey,” he said.

“I came here with a purpose to add something to that and to help the club build for the future.”

Rodgers, who went close to winning the title with Liverpool in 2014, moved to Leicester from Celtic in February after winning seven trophies in just under three years in charge.

“The support I have had from the chairman, Khun Top; from the chief executive, Susan Whelan; from the Director of Football, Jon Rudkin; and from everyone at the Club has been amazing. I’ve inherited an outstanding team of staff that are dedicated to progress and improvement and we have a group of players that are a joy to work with every day.

“And to the club’s supporters, I can only say thank you for welcoming me and my staff into your club and for putting your faith in our work. We’ll continue to work together to bring success to Leicester City for many years to come.”

Leicester City is delighted to confirm that manager Brendan Rodgers has signed a new contract! 📝

Rodgers’ decision to commit his future – which he had insisted was with Leicester ever since the Arsenal links emerged – is a further boost to City’s impressive season.

They have won seven league games in a row to emerge as Champions League contenders and, were Liverpool not so dominant at present, would be in the thick of a title battle.

Leicester chairman Aiyawatt Srivaddhanaprabha said: “Brendan’s qualities as a coach are well-known and evident in the way he has sought to unlock the potential in every member of our exciting young squad.

“But just as important to us is the suitability of Brendan’s wider philosophy to the club’s established culture and values. He and his staff immersed themselves immediately, building an understanding for the Club and the city and an appreciation for what makes them special.

“That has been a valuable combination over the last nine months – strengthening the bond between our players, staff and supporters – and I’m excited to see how it can continue to enhance our long-term vision for the club.”