Home All The News Rodgers: Ex-Liverpool man should be one of ‘top three strikers’ 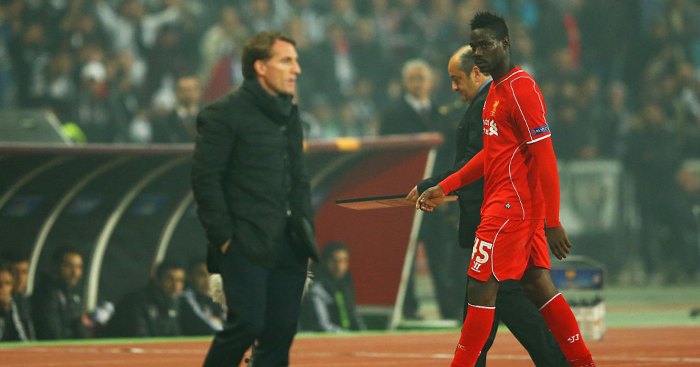 Mario Balotelli should be one of the “top three” strikers in world football right now, according to his former Liverpool boss Brendan Rodgers.

The controversial striker scored 30 goals in 80 matches for Manchester City before arriving at Liverpool in 2014 via a successful spell at AC Milan.

Rodgers, who was manager of the Reds at the time, brought him to Anfield in deal worth £16m.

FEATURE: Ranking every Champions League final from worst to best

The Italian could only score one Premier League goal for Liverpool before being shipped out on a season-long loan to Milan and eventually left Anfield for Nice the season after on a free transfer.

“It was always going to be very difficult to replace a player like Luis [Suarez],” Rodgers told The Beautiful Game Podcast.

“There was a little bit of stuff written about that team, that it was a one man team, and that was really unfair. We created a team.

“That’s like saying Tottenham’s built around Harry Kane. He’s a world class striker but he needs the others around him as well. It’s the same here with Jamie Vardy, he’s a top level striker.

“When Luis left we were missing that spark and like you said – Alexis Sanchez.

“We had spoken over the summer and I was led to believe his partner was keen to move to London. He obviously went to Arsenal and was fantastic.

“We missed out and we had Daniel Sturridge who had been struggling, Fabio Borini who was looking to move on and we bought in Rickie Lambert to be the fourth choice to help and support in cup games.

“It ended up, with Luis going, Fabio going and Daniel being the only one, it left us in a really vulnerable position.

“It was pretty clear to see that, strikers I’ve always worked with, Mario Balotelli didn’t fit my style.

“But one thing I will say about Mario is that he has all the talent, and he genuinely has.

“He should be one of the top three strikers in world football. He has everything. It’s the difference between talent and working talent.

“It was just unfortunate he’d come in when Luis had left and in his first game he did very well.

“We won 3-0 at White Hart Lane and he was very good. Mario played with Daniel in a diamond and it worked so well, but after that game Daniel got injured.

“We went through a period when we were pressing the game, weren’t intense enough and I thought we had to change something because we’d lost that ingredient. That’s when I played Raheem (Sterling) there and we went to 3-4-3.”