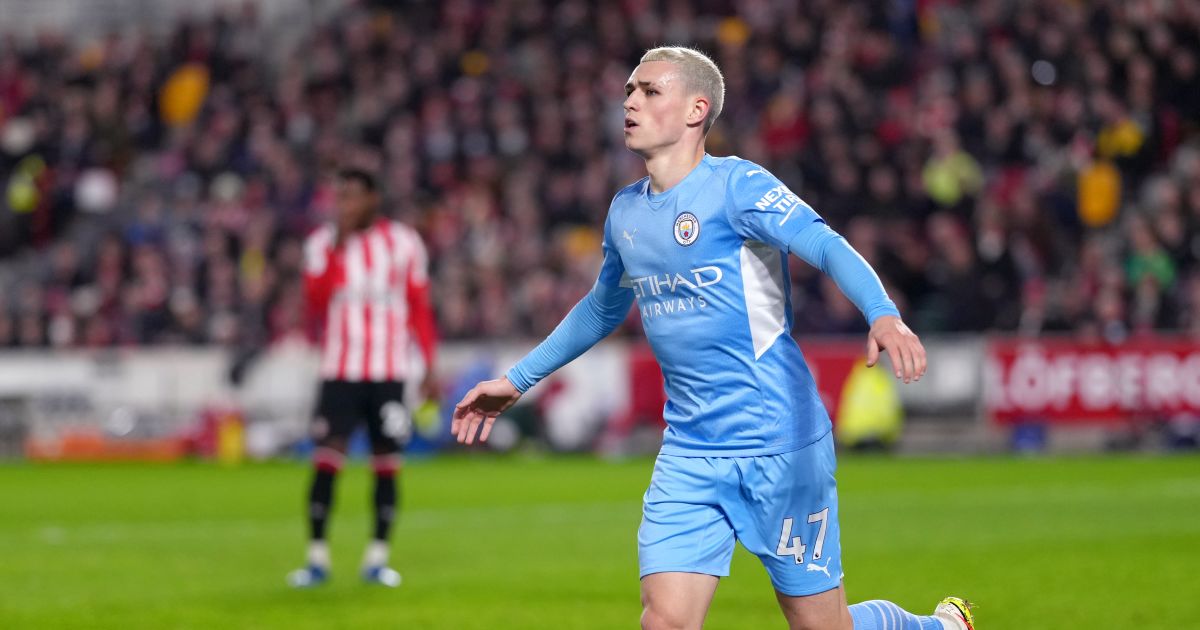 Manchester City moved eight points clear at the top of the Premier League with a hard-fought 1-0 win at Brentford on Wednesday night.

Phil Foden’s neat finish from Kevin De Bruyne’s cross proved sufficient on an awkward night for the champions, whose slightly nervy wait for the final whistle was extended when Aymeric Laporte’s late header was ruled out by VAR for offside.

But City held on and, thanks to Brighton’s late equaliser at Chelsea in the evening’s other game, are now eight points clear of the Blues and nine ahead of Liverpool at the top of the table heading into 2022.

Foden and Jack Grealish had been benched for City’s wins over Newcastle and Leicester after they were pictured on a night out following the 7-0 home win over Leeds.

But the England pair were back in the starting line-up in west London, and Foden’s goal made it a perfect 10 wins in a row for Pep Guardiola’s defending champions.

The calendar-year stats churned out at this stage of the season usually have little relevance, but City’s warrant a mention.

They have set English top-flight records for the most victories, 36, and the most away wins, 19, in the last 12 months, while their tally of 113 goals is also a Premier League record.

Brentford have beaten Arsenal, held Liverpool and given Chelsea a fright this season but with 11 first-team players missing – the suspended Christian Norgaard and calf-injury victim Bryan Mbeumo the latest absentees – this had the potential to be a long and painful night against a side who had scored 30 goals in their previous nine wins.

It did not turn out that way, though. In fact, after 10 minutes of constant, if rather toothless, City possession it was Brentford who created the first real chances.

When City gave the ball away on the halfway line Frank Onyeka raced through on the counter-attack before firing a low shot which Ederson gathered.

But with their usual ruthless efficiency, City promptly swept up the other end and scored seconds later, Kevin De Bruyne whipping in a first-time cross from the right which Foden expertly guided home with his in-step.

The rest of the first half was fairly uneventful, apart from the increasing niggle between Fernandinho and Ivan Toney which culminated in the Brentford striker giving his adversary a gentle tread on the shin as he lay on the ball.

Brentford were defending stoically, not least in stoppage time when Ethan Pinnock’s header denied Grealish – who looked a little lost in his role as false nine – a simple finish at the far post.

City could, and probably should, have scored more after the break. Less than a minute into the second half Foden almost had another, his glancing header from another De Bruyne cross flying wide of the far post.

Foden, now playing the central attacking role with Grealish pushed out on the left, had the ball in the net four minutes later, but he was offside when he nodded in Gabriel Jesus’ cross.

Then De Bruyne hit the near post with a skidding effort from the edge of the area and Fernandinho blazed a volley over.

Three minutes from time the ball was in the Brentford net again, but VAR adjudged Aymeric Laporte was just offside when he headed in De Bruyne’s free-kick, and for once free-scoring City had to settle for just the one, which was enough to ensure a happy new year for Guardiola and his side.