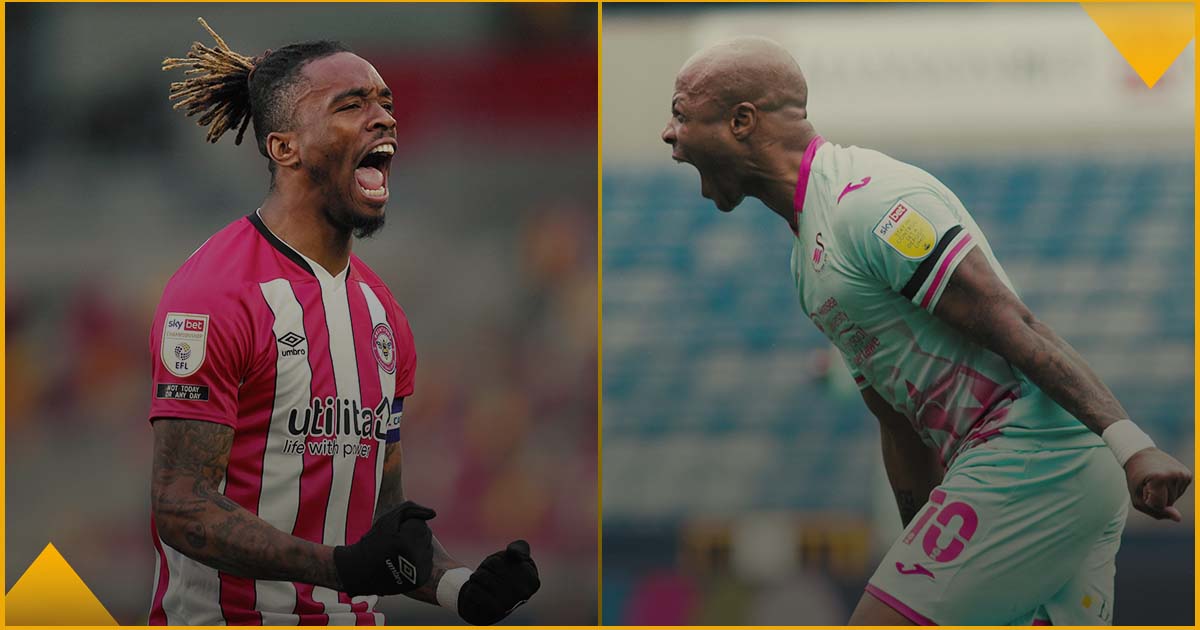 We have partnered with Betfair and the Benjamin Bloom Football Channel on YouTube to cover the Championship play-offs. Here, Ben previews the final between Brentford and Swansea City at Wembley on Saturday at 3pm…

How They Got Here
The play-off final is set and Brentford will play Swansea at Wembley this Saturday. Use whatever cliche you like – ‘biggest game in football’, ‘the £170m game’ – but winning this game can completely change the outlook of a club for years to come when that final whistle blows.

Brentford powered through a tumultuous semi-final second leg with Bournemouth last weekend. The Bees were two down on aggregate five minutes into the game before equalising quickly from the spot and, after Bournemouth went down to ten men, finding the two further goals needed to get past the Cherries.

Swansea were never behind in their tie, a much more pragmatic affair against Barnsley. The Swans led 1-0 going into the second leg and when Matt Grimes put them two up on aggregate, despite a late Barnsley surge, Swansea were on their way to Wembley. It was 1-1 on the night and Steve Cooper takes his side one step further than last season, where they were knocked out in the semi-finals. Who were Swansea’s conquerors at that stage last season? Brentford, of course, who will look to go one better this season.

Brentford to be promoted: 4/11 (Betfair)

Swansea Tactics
Both managers have left a trail of crumbs in the semis to help us comprehend how they might approach the finals. Both finalists had a key change of shape during the regular season run-in and both managers started the semi-final games with their newer system.

Swansea were excellent defensively in their 4-3-3 shape. Freddie Woodman, Ben Cabango and Marc Guehi formed a formidable keeper and centre-half triangle and full-backs Jake Bidwell and Kyle Naughton would count themselves unfortunate not to start the final. But the big question has been the presence on the bench of the excellent Connor Roberts, a standout at right wing-back during the season. Cooper could sense the opportunity to put in a more attacking threat with Brentford more open, but I reiterate that would be tough on Naughton. In midfield, assuming all are fit, a trio of Grimes, Conor Hourihane and Jay Fulton will likely start, providing a bit of everything in the central area.

Where we do have a guaranteed Swansea change will be in the frontline. Andre Ayew and Jamal Lowe seem nailed-on starters, but they were accompanied by veteran Wayne Routledge in the second leg of the semi-final, with Routledge sadly stretchered off with what transpired to be an ACL injury. Cooper seemingly has two choices as a straight swap in that central striking spot: Liam Cullen, who started the semi-final first leg; or Morgan Whittaker, the youngster who arrived from Derby early in the season.

There is, of course, another option. If Cooper wants the best 11 players on the pitch – which admittedly does not always make the best team – he could go back to Roberts. Roberts finished the second leg as a sub somewhere in between a midfielder and a winger as Swansea defended their lead and Cooper could move Ayew or Lowe centrally and deploy Roberts down the right. Some would then rightly argue that the further back Roberts found himself, the closer Swansea would be to their previously abandoned 3-5-2 shape. Would Cooper be tempted? I think not, but stranger things have happened.

Brentford Tactics
With the Swansea situation seemingly boiling down to an ‘either or’ scenario, it feels a little more fluid for Brentford. Like Cooper, Thomas Frank faithfully started both games with his new 3-5-2 shape, but there are many more moving parts when it comes to the possible Brentford selection on Saturday. The first thing is fitness: Christian Norgaard was injured in the warm-up ahead of the second leg last Saturday and despite his return in the first leg as a sub, Rico Henry was not fit to play either.

If we assume the best-case scenario for Brentford and both of these players are available to start the final, then Frank has a few big selection decisions to make. Again starting with an assumption that Frank will use the same 3-5-2 shape, here is my view on what the team would look like. In goal, David Raya will start, behind a back three containing Pontus Jansson and Ethan Pinnock. If Norgaard is fit he would play in the middle of the three, with Henrik Dalsgaard right wing-back. If he’s fit, Rico Henry would be preferred at left wing-back. If Norgaard doesn’t make it then Dalsgaard plays centre-back and Roerslev right wing-back. If Henry doesn’t make it Sergi Canos would continue at left wing-back.

In midfield, Mathias Jensen and Vitaly Janelt seem likely to be two of the three Wembley starters. The more attacking role was taken by Emi Marcondes in leg two against Bournemouth and he could be retained, but Tarique Fosu-Henry, Bryan Mbuemo, Saman Ghoddos and Sergi Canos could all fill the attacking midfield role. Up top, Ivan Toney is an obvious starter with Bryan Mbuemo, whose running forced the key slip and red card for Bournemouth’s Chris Mepham, contending with Marcus Forss, who came on and scored the winning goal to get the Bees through.

Despite all the uncertainty about fitness, I’ll stretch to saying that Frank will likely stick with the 3-5-2 shape and where availability allows, experience will dictate the selections in those remaining uncertain positions. What is certain is that if Dalsgaard and Henry are fit, there is plenty enough quality in that Brentford squad to put out a very good side in whatever shape Frank plumps for.

Key Battle – Ethan Pinnock v Andre Ayew
Ethan Pinnock arrived at Brentford from Barnsley two summers ago and quickly made the left-sided centre-back position his own, starting 73 Championship games and finishing third twice with the Bees. He gives balance as a left- footer, not to mention a huge threat from attacking set plays, but there was a small air of nerves surrounding him in the semi-final against Bournemouth. Twice in the second leg, Bournemouth were able to run easily past him and in the first leg he was totally caught out by David Brooks’ ball inside him, resulting in a big chance for Philip Billing.

This is obviously not intended to be a hit piece on Pinnock, but perhaps he is still learning the back-three system and isn’t particularly fond of the often wide-open space outside of him. Brentford have always been open and attacking but perhaps covering that flank, particularly with winger Canos rather than full-back Henry ahead of him, may be something that Pinnock and Brentford are still working on.

Here’s where it gets really interesting. Who will be coming up against Pinnock in the final? Ayew, widely acknowledged as Swansea’s go-to guy, best player and biggest attacking threat. In the first leg of the semi with Barnsley, Ayew found himself in a wing-back-vacated area down the Swansea right. He engaged the left centre-back, stepped inside and curled the ball into the far corner.

With Pinnock relatively new to the role, you would not be surprised if Cooper will be looking for quick transitions and getting Ayew v Pinnock in one v ones. We know Ayew has the class to make the most of these openings; can Pinnock stand up to him on the big stage?

Brentford Fan View
So Brentford have made it again. Our tenth attempt at shaking off our unlucky play-off hoodoo. But realistically what chance do we have of winning?

Last season we also overcame a 1-0 deficit in the first leg of the play-off semi-finals to win the second leg and set us up for a final at Wembley with west London rivals Fulham. After the euphoria of reaching the final, Brentford didn’t do themselves justice, overthinking the game and approaching it with a certain amount of caution which Fulham capitalised upon.

Swansea Fan View
Wow, we made it. The play-off finals! One step further than last year and only 90 minutes away from Premier League football. What a fantastic turn of events for Swansea City in what has turned out to be a very difficult season. I’d have to say it was probably written in the stars that we would have to face Brentford to make it back to the Premier League; there is definitely some bad blood there and possibly some revenge to be had for last season.

I’m really interested to see how Cooper sets up for this game; do we stick with four at the back like we did against Barnsley or do we match up to Brentford and go for three at the back with wing-backs? I, personally, being a little superstitious, would like to see us play four at the back. I think we are defensively very strong with Naughton, Cabango, Guehi and Bidwell and I think that is our best shot at keeping Ivan Toney quiet.

We know we can create goals from very little play due to the quality of some of our squad, but it would be really nice to see us take control of the game early on and show the world what the Swans are capable of. I have every faith in our players to stay calm and composed and be able to soak up pressure from Brentford and then take our chances when they come. Ayew, Hourihane, Grimes and Fulton will be key.

Bet Builder
Betfair have boosted Benjamin’s Bet Builder from 3/1 to 7/2. Go to ‘All’ on the markets page and scroll to the bottom to back his selection.