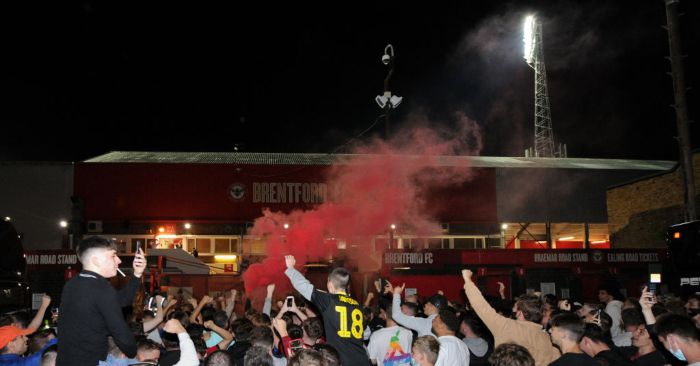 As Brentford and York City wave goodbye to historic home venues, football’s soul is going along with them.

A sense of finality at Brentford’s play-off victory at Griffin Park this week, not least for the Bees’ last game at a venue which oozes authenticity, but for the last knockings of English terrace culture as we know it.

Locked out locals massed at the gates on Braemar Road, passing one of the four pubs probably as famous as the team, and stood under floodlit streets as they had done for matches under the imposing metal constructs which threw light on matches at a football ground first opened in 1904.

Electric lit games came later, of course, but the resonance remained in the stadium to this day.

Theory of evolution could take Brentford all the way

Gone will be the Ealing Road terrace, with its red crush barriers, the paint chipping off in celebration or an anxious grip on the defence. Gone will be the double decker away end where travelling fans congregated, transfixed like in 1950’s movie theatres. Lost will be the corner floodlight pillar where that good dad plonked his blond mopped kid for the best view. Lost will be the throng at the Griffin, the best boozer of them all with the fans spilling out onto the streets like a Ford Madox Brown painting, and that short hop to the ground.

The fans were kept away in a Covid-19 bubble at York’s Bootham Crescent, too, another authentic football ground which saw its final match in a play-off game recently. You don’t have to zoom out too far to find the Crescent on a Google Maps image of the city. But now this centrally located venue is to go in favour of an out of town all-seater location.

Bootham Crescent is younger than Griffin Park, ironically built between the wars to be closer to the city centre because of the remoteness of York’s former home at Fulford. Now the opposite appears to be happening: a retreat into the suburbs. The fans are unsure if they will ever get in to say one last goodbye.

In their place, inevitably at Brentford and York City, will be housing developments, this warped idea that expensive abodes are somehow progress from established sporting venues in a minimum wage economy.

The Brentford increase in capacity from Griffin Park to the new build at Lionel Road will be a paltry 4,737, with the Bees making much truck of the “2,930 Premium Seats” being “an important new revenue stream in the pursuit of top-flight football”. Not much comfort for working poor fans that might fancy a game at Brentford, nor those that see the Bees looking to get established in a super rich league of nation state owners via a limited number of padded seats.

Of course the Moneyball success of Brentford owner Matthew Benham is blinding, the Premier League beckoning. But in sports that last centuries, club owners come and go, much like success. Then all you’re left with is your history, or lack thereof. A game passed down through generations is as much about yesterday as it is today.

English football is engrossed in the construction of a stadium arms race; the game the fans built over centuries is being demolished at speed. Will the loss of the things that made communities fall in love with football and football grounds – the standing congregation, the cheap tickets, the rough and ready terrace culture – mean that customers turn their back on what is morphing into just another dislocated leisure option in the years ahead? This thing of ours is now that thing of theirs.

The Football Association, hardly inundated with things to do, should now turn its attention to preserving those last few remaining historic football grounds before it is too late. With architectural advances there must be ways to work with compact sites. We have to find a solution for clubs to improve their grounds without selling them for real estate values.

The formation of an English Heritage style body to protect priceless ground is way overdue.

We now look to Goodison Park, Everton, as the last jewel in a much bashed crown of English football stadia. To Carlisle, Cambridge, Southend, Hereford, those old-school grounds clinging on.

English football losing its sense of smell and taste: the last steps before quiet soul death.