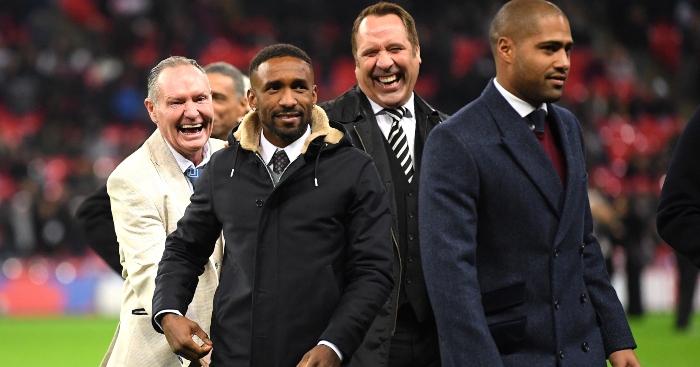 Alright, Dave?
Dave Kidd did not enjoy his night out at Wembley one bit. Seven goals, a hat-trick from the captain and a couple of really good performances (excusing one very bad one from Montenegro), but Kidd only has eyes for the Sterling-Gomez controversy.

‘But how fitting it was that Raheem Sterling and Joe Gomez should have reminded us about the true meaning of England-watching over these past 147 years.

Because, save for one glorious day in the summer of 1966, this is a football team best remembered for scandal and aggro and chaos.’

To an extent, Dave, but – remembering that you’re writing this for The Sun – how much of that has been actual controversy over the years and how much has, how do we say this tactfully, been wilfully overblown for the sake of shifting tabloid newspapers?

It’s also quite strange to be this angry about The FA’s 1000th game commemoration. Yes, they do seem to be caught in a perpetual state of self-celebration, but aren’t we trying a little bit too hard to breath life into the Sterling-Gomez affair (Day five, for anyone counting).

‘But while they saluted all the good times – 1966, Italia 90, Euro 96, last year’s summer of love in Russia – there is so much more to the history of the England team than this, as Sterling’s canteen headlock on Gomez brought home to us.

The collection of legends who made it out of hospitality and on to the pitch at half-time was largely underwhelming – Glen Johnson anyone?

But up in the stands, it was so good to see Fabio Capello evoking memories of the halcyon days of internal strife.

John Terry versus Wayne Bridge. Now there was a proper fall-out.’

Not to go all Popbitch, but Terry versus Bridge was apparently nothing compared to the scenes in a recent World Cup mixed zone. Now that, according to those in attendance, was a proper fallout.

The trouble with that ‘true meaning’ of England watching comment is that it wreaks of hypocrisy – neither the FA, nor the England players, nor actually a succession of England managers have covered themselves in glory over the years, but international breaks have become associated with tabloid tittle-tattle by design. It’s a construct.

Or worse. Re-read the section of All Played Out in which Pete Davies encounters travelling England supporters who report being offered money to start trouble in Italy.

What does England make Mediawatch reflexively think of? Hand-wringing. Tedious moralising. Maybe the occasional Eileen Drewery. Possibly the odd Fake Sheikh or Pint O’ Wine. But more often the endless moaning and the mountains made out of molehills. And that’s really nothing to do with the team.

Manchester United propaganda of the day
Let’s be fair. Being a club correspondent during an international break and outside of the transfer window has to be a rough gig.

Still, Mediawatch is not about to give the Manchester Evening News a pass for this:

No club turns more corners than United. No football team has more seemingly incidental moments which actually – secretly – mean a great deal and signify the side’s about-turn towards greatness.

‘When Lewis Dunk’s header went in at Old Trafford on Sunday afternoon the visitors thought they were in with the chance of salvaging something from the game.’

Okay, but that’s nearly a week ago now, so this better be significant…

‘But the 10 minutes that followed after Dunk’s goal on Sunday were when United were at their most dangerous. While Brighton expected United’s heads to drop and the fans to get nervous Solskjaer’s side continued with their impressive attacking threat to kill off the game.’

That’s it. That’s the moment. Conceding a goal to Brighton but not losing a two-goal lead is now, in 2019, something which could potentially alter Manchester United’s season.

Following Danny Rose’s petulant little interview with the Evening Standard on Wednesday, in which he suggested that he intends to sit on his contract for the next 18 months, Max Winters has discovered that Rose might not be the only point of concern for Daniel Levy and Mauricio Pochettino.

‘Tottenham are concerned that star trio Christian Eriksen, Jan Vertonghen and Toby Alderweireld could all follow Danny Rose’s lead and leave the club on free transfers next summer.

Things could get worse for Spurs though with Eriksen, Alderweireld and Vertonghen all on course to leave on free transfers next summer.’

That’s right, Max, nobody has talked about anything else since the Champions League final.

And not just a top story, either, but a half-page, full width graphic with three separate images, plunging every other story into digital darkness.

So, this better be good.

‘…despite Ibrahimovic’s impressive goals tally in the States, Klopp has made it clear that there is one reason why he won’t be signing the Swedish striker .

“If he had not played for Manchester United before, then we might have considered him,” Klopp told Sportbladet . “But I’m not even sure he wanted to play here. We’re a pretty intense team…”‘

Right, but that’s not really a story, is it? At best, it’s a line on a website or an anecdote within an article about something more significant.

In fact, it’s not even good clickbait. How about KLOPP TROLLS MAN UNITED. Or IBRAHIMO-BITCH: SNIDE KLOPP MOCKS LAZY ZLATAN.

Try harder. Try much, much harder.

Liverpool propaganda of the day

Edwards and the scouting team targeted 19-year-old Ben Chilwell – Leicester's backup LB at the time – and Andy Robertson from Hull out of ALL LB's in the world to fill the position in 2017. This genuinely embodies LFC's gobsmackingly good recruitment methods and scouting network.

Somehow, the real hero of a story involving a Leicester player performing extremely well for England is Liverpool’s director of football.

Man Of The People
Generally speaking, there is no more reliable trope than ‘politician using football to score points but making an absolute arse of himself’ and –  wonderfully/terrifyingly – Brexit secretary Steve Barclay has fallen headlong into that trap.

Do we want more players in the @PremierLeague from Brazil, Argentina or Africa compared to the EU? Or more English qualified players to strengthen the national team @FA? What would you rather see? The key opportunity of Brexit is that we will get to decide ⚽️ pic.twitter.com/QSJ6jwjfpY

Good to know that we’ve got our sharpest minds at work. *Eye-roll*.

Oliver Kay on social media and abuse of players(£).