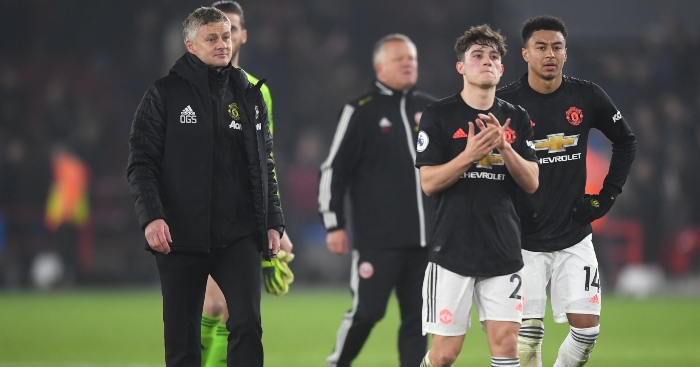 If we weren’t already well accustomed to this from Manchester United, the suspicion might be that their performance at Sheffield United was the players’ not-too-subtle way of telling Ed Woodward to get Mauricio Pochettino on the phone.

Such subterfuge in the United dressing room has worked in the past. Indeed, allowing their standards to fall woefully short of what is expected of a United team, even this one flailing about in mid-table, to turn the focus on the manager has become the preferred method of self-preservation at Old Trafford over the last five years.

So poor were they at Bramall Lane for all but ten minutes that they should consider themselves fortunate to be within a point of Burnley and with Bournemouth breathing down their necks. This was even worse than the drab surrender at Dean Court on their last road trip which Ole Gunnar Solskjaer described as “a step back for us”. Without a point, this might have been a lengthy stride towards the exit door.

Every unit in front of David De Gea failed to perform its most basic function. For 80 of the 95 minutes, Solskjaer’s three-man defence, barely-there midfield and hopelessly-impotent attack engaged in a three-way race to the bottom which for long spells was too close to call.

Solskjaer didn’t trust his players to go toe-to-toe with Chris Wilder’s men in his preferred formation – we think that involves a back four, but we’re still not sure – so he remodelled his rearguard with the intention of stiffening up De Gea’s protection while the United No.1 searched in vain again for a first clean sheet in 12 away matches. The United boss expected his midfield to offer all the resistance of soggy papier-mache, but neither Fred nor Andreas Pereira could be directly blamed for the defensive mess in the first half.

The back five, featuring two summer recruits who between them cost more than Sheffield United have spent in their history, were regularly undone by the simplest of long balls. Not long passes; hopeful long balls catapulted into channels over the heads of Harry Maguire, Victor Lindelof and Phil Jones, played with the intention of turning Solskjaer’s defence.

That simple task seemed beyond them. Lys Mousset’s labrador-like thirst for a chase didn’t make it easy but all three central defenders looked more terrified with each grenade hurled by Oliver Norwood, John Fleck and John Lundstram. Maguire panicked under one before Jones willingly threw himself on to another, even if he was given a nudge on his way by Mousset.

It’s not Calamity Phil’s fault. This was his first Premier League start of the season in an unfamiliar role on the left of a back three and the rust was all-too-obvious. And entirely to be expected. That he was considered the answer to any of United’s questions for this examination is a more damning indictment of the club than the player.

Jones was culpable for the first and the Blades’ second goal can be pinned squarely on one half of an engine room described by Gary Neville as “not a midfield, just a couple of players they have got left”.

12 – Manchester United have failed to keep a clean sheet in their last 12 top-flight away games, their worst streak since a run of 15 in the 1985-86 campaign. Leaky. pic.twitter.com/1QKTUzgrew

Pereira lost possession before being made piggy in the middle by Mousset and Fleck. The latter teed up the former superbly and Mousset finished exquisitely after Fred was dropped on his retreat like a sloth chasing a cheetah.

Neville was partly right, Pereira and Fred are just about the only two senior midfielders Solskjaer has left. Scott McTominay was woefully missed – an indictment in itself – and of course Paul Pogba remains on the sidelines, or rather 4000 miles behind them in Miami. But in Fred and Pereira, Solskjaer is left with the barest of bones to form an engine room.

It’s probably no coincidence that United suddenly sprang to life upon Pereira’s withdrawal, though the midfielder might be entitled to ask his attacking team-mates why his exit prompted them to wake from their slumber.

For 73 minutes, Anthony Martial, Daniel James and Marcus Rashford appeared utterly unwilling to move away from the toes of the Blades’ back three. From Martial, we expect such lethargy. But Rashford and James would normally be expected to at least offer the illusion of movement. Until Williams gave United an undeserved lifeline, we saw potentially the fastest forward line in the league present themselves as the most immobile.

But in seven minutes after Williams’ brilliant finish, United’s attack sprang to life to give themselves an even more undeserved lead. Rashford waited to swap flanks before offering a glimpse of his quality to set up Mason Greenwood for the leveller, two minutes before wrapping up a devastating move involving Martial and James which, apparently, they had been saving themselves for.

But even then, with the Blades bereft, Solskjaer’s United found a way to drop points. As 90 minutes ticked over, James and Fred missed tackles and Lindelof allowed Callum Robinson to turn and find Oliver McBurnie in the centre of the box. Whether or not the ball brushed his arm should not be the primary concern for Solskjaer; that the substitute was allowed to pull it down and pick his spot is far more alarming than any VAR inconsistency United might cling to.

A point, far less so than the three they should have had, cannot paper over what for more than three-quarters of the game was a truly wretched United performance. For roughly a quarter of an hour, they showed some of the qualities we keep being promised, but that brief glimpse of their potential should not be the take-home from their Bramall Lane escape.