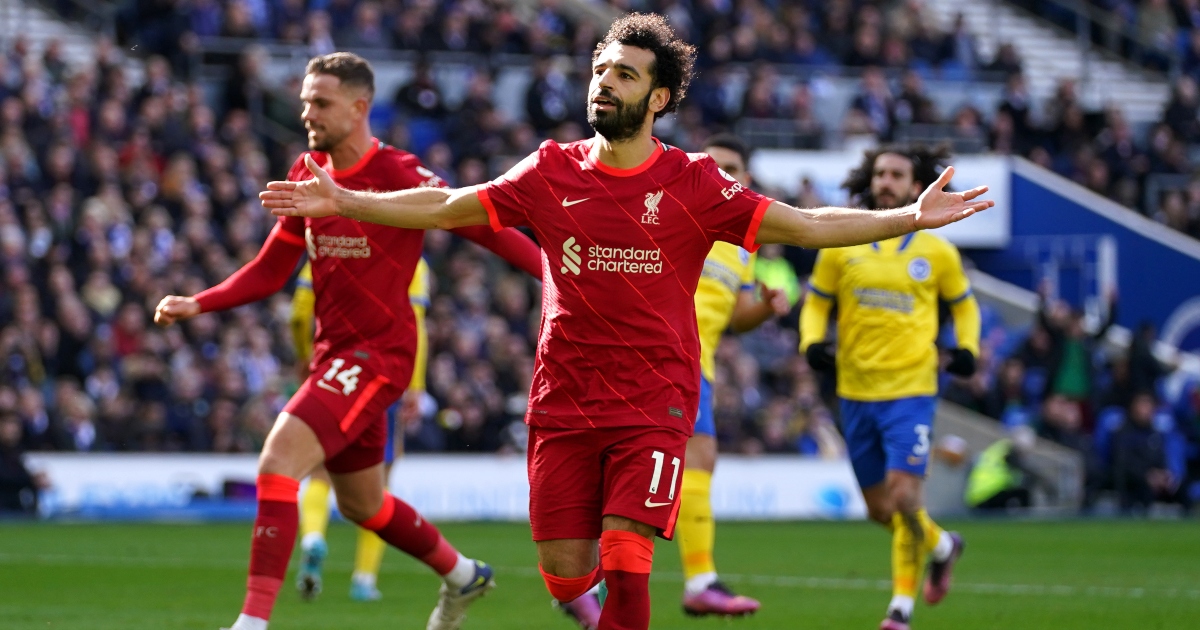 Liverpool moved to within three points of Manchester City with a comfortable 2-0 win at Brighton on Saturday lunchtime.

The Seagulls had fought back from two goals behind to force a draw at Anfield in October but there were no slip-ups for Jurgen Klopp’s side this time around as they left the south coast with all three points.

A Luis Diaz header gave Liverpool the lead in the first half – but the forward received a heavy blow in the process as Robert Sanchez rushed off his line. However, VAR review ruled there was no red card for the goalkeeper.

Mohamed Salah’s second half penalty doubled Liverpool’s advantage and they saw out the remainder of the game with relative ease to move to within three points of Manchester City, with a game in hand.

Liverpool recorded an eighth successive Premier League victory, a run which has seen them score 21 goals and concede just two, as they bounced back from their first home defeat in a year against Inter Milan in the Champions League.

Brighton’s poor run of form continued as they slipped to a fifth defeat in a row – and they were unable to add to their poor tally of one goal in their last five matches.

The Seagulls started brightly, and came the closest to scoring in the first five minutes when Alexis Mac Allister crossed for Neal Maupay, who tried his luck from the edge of the area but was just wide of the target.

Klopp said before the game he expected a reaction after the Reds experienced only their third defeat of the season to Inter Milan midweek, but they struggled to get going before Diaz put Liverpool ahead in the 20th minute.

Luis Diaz opens the scoring after an incredible pass from Joël Matip! 🔥

Despite being taken out by Robert Sánchez the Liverpool forward is ok to carry on 🙏 pic.twitter.com/Vka83JoN2X

Diaz bravely headed the ball into the back of the net before being clattered by Sanchez rushing out of his goal, the medics were waved on and a subsequent VAR review allowed the goalkeeper to controversially remain on the field.

Salah had a chance to add to Liverpool’s lead just before the half-hour mark, when Virgil Van Dijk’s header down from a corner was cleared to the Egyptian on the edge of the box, but his attempt flew over the bar.

Just before the break, Liverpool were controlling the ball, and Sanchez had to make a straightforward save from a clever flicked effort from Salah from a Trent Alexander-Arnold cross, but the hosts struggled to create anything themselves.

Just after half-time, Leandro Trossard had an opportunity to level the tie from 14 yards in the centre of the box, but his attempt sailed far over the bar.

Salah then added his 20th goal of the season, for a fourth time in his five years at the club, from the penalty spot – minutes after having an effort rebound off the crossbar.

Referee Mike Dean had pointed to the spot after Naby Keita’s half-volley struck Yves Bissouma on the arm, as the Brighton man managed to avoid a second yellow.

Salah stepped up to take the penalty and fired it past Sanchez into the back of the net. It proved to be his last impact on the match – after going down and receiving treatment he was replaced by Diogo Jota shortly afterwards.

Liverpool saw out the rest of the game with composure, as neither side had a significant chance to alter the scoreline and it finished 2-0.