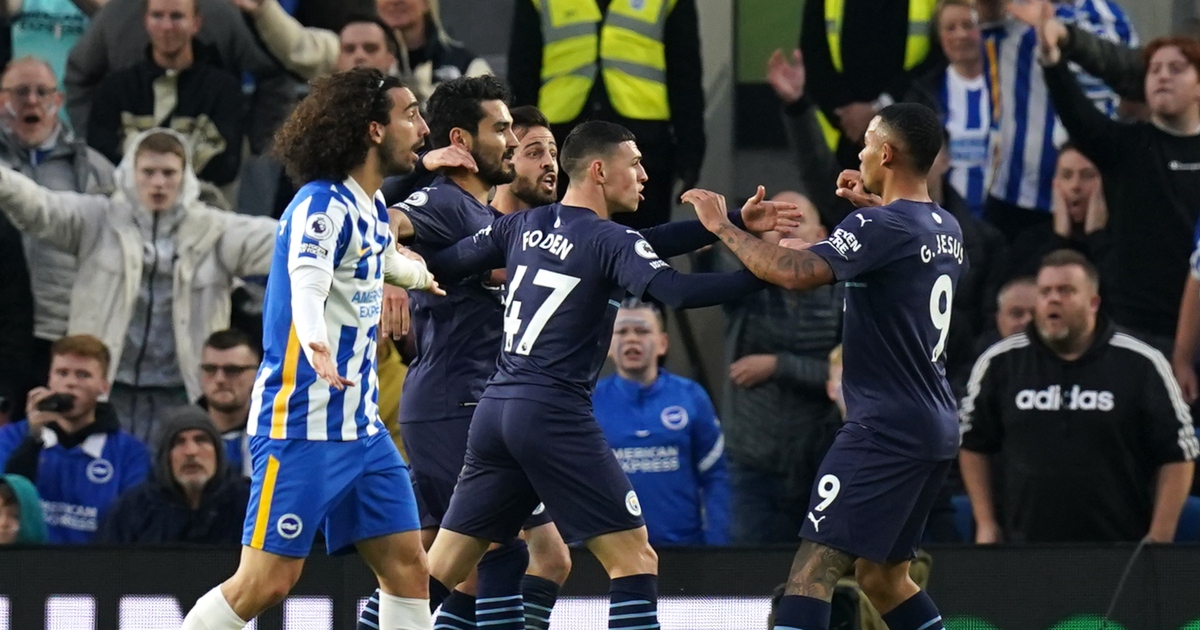 A first-half masterclass from Manchester City saw them win at Brighton and move back up to second in the Premier League.

The reigning champions were untouchable for 45 minutes as Phil Foden scored twice after the recalled Ilkay Gundogan had opened the scoring.

Brighton were much better after the interval and arguably deserved more than the consolation given to them from the penalty spot by Alexis Mac Allister, with Riyad Mahrez striking late on as City left the south coast with a 4-1 win.

Raheem Sterling scored a hat-trick here two seasons ago but, with his City future unclear, he was not involved as Pep Guardiola pointed to a lack of fitness.

City’s players warmed up in shirts which carried the message “We’re with you Guido” in support of supporter Guido De Pauw, who was attacked following the Champions League win over Club Brugge on Tuesday night.

The travelling fans also unfurled a banner with the same slogan of support as the teams emerged ahead of kick-off.

Joao Cancelo, sent off here after 10 minutes last season, forced a fine low save out of Robert Sanchez having collected a pass from Jack Grealish, who had made a lively start to the evening.

Gabriel Jesus came within inches of opening the scoring moments later but his effort was acrobatically cleared away from under his own crossbar by Seagulls skipper Lewis Dunk.

Unfortunately for Dunk, City would open the scoring from their next attack as Sanchez spilled a Foden cross under pressure from Jesus and Bernardo Silva hooked the ball to Gundogan, who finished into an empty net.

A short VAR check for a foul on Sanchez saw the goal stand and was just reward for a dominant start.

The lead was doubled before the half hour, Bernardo starting a swift counter-attack and feeding Grealish whose low cross was turned home by England team-mate Foden.

Two would become three shortly afterwards as a Grealish shot was blocked into the path of Jesus, whose own strike deflected off a seemingly unwitting Foden and past Sanchez.

Brighton were not at the races but almost pulled one back before half-time as Ederson let a Solly March shot squirm through his grip before recovering in time to prevent a calamitous goal.

City had been superb in the first half but, unlike league leaders Chelsea who had thrashed Norwich 7-0 earlier in the day, they could not continue their form throughout the evening.

Ederson had a similar experience at the start of the second half having to recover from a spill from Pascal Gross’ shot to keep the ball out of the reach of Neal Maupay.

Leandro Trossard was next to test Ederson, who was much the busier of the two goalkeepers since the interval.

Guardiola responded by bringing on Fernandinho in place of Gundogan for the final 17 minutes but Brighton remained on top as the City boss prowled the touchline, irked with a number of his players.

Referee Kevin Friend pointed to the spot with nine minutes to go after adjudging Ederson had fouled Enock Mwepu, with fellow substitute Mac Allister making no mistake from the resulting penalty before Mahrez added the finishing touch to City’s display.