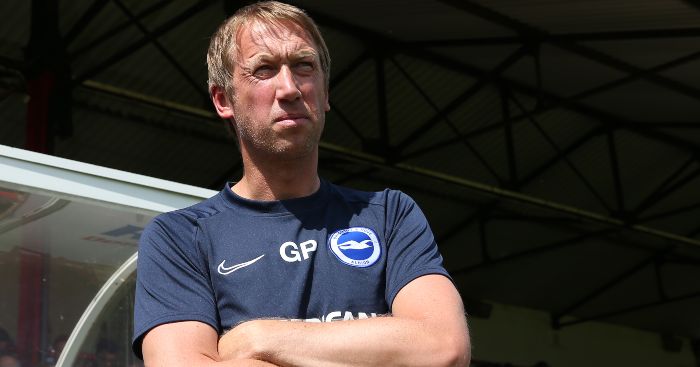 Brighton boss Graham Potter has landed a contract extension until 2025 after just six months in the job.

Potter only joined the Seagulls in May, initially on a four-year deal, but he has made an impressive start to life at the Amex Stadium – Brighton currently lie 12th with 15 points from their first 13 matches.

The 44-year-old said: “I’ve had a tremendous welcome from everyone connected to the club – staff, players and fans – and have found it very easy to settle.

“The infrastructure, support and everything associated with the club is first class, and I’m pleased with what we have been able to do already, but there is still a way for us to go.

“I’m thrilled that the club have liked what they’ve seen so far, in a relatively short period of time, and have already shown an added confidence in what we are trying to do.

“I hope that this is just the start of what will be another successful period in our history, and I’m extremely grateful that the club have made this long-term commitment.”

Potter left Swansea to replace Chris Hughton, who was sacked at the end of last season despite keeping Brighton in the Premier League.

Chairman Tony Bloom said: “We’ve been really pleased with the start Graham has made as head coach since joining us in the summer, and I’m delighted he and his staff have committed to these new long-term contracts.

“Together with his backroom team, he has continued the club’s progress of recent years and brought a different approach with a new style of play, which has been embraced by players and supporters alike.

“In the summer we unveiled a new long-term vision for us to become an established top-10 Premier League club, and we feel even more strongly that Graham as a bright, energetic and innovative head coach, is the right man to lead us there.”